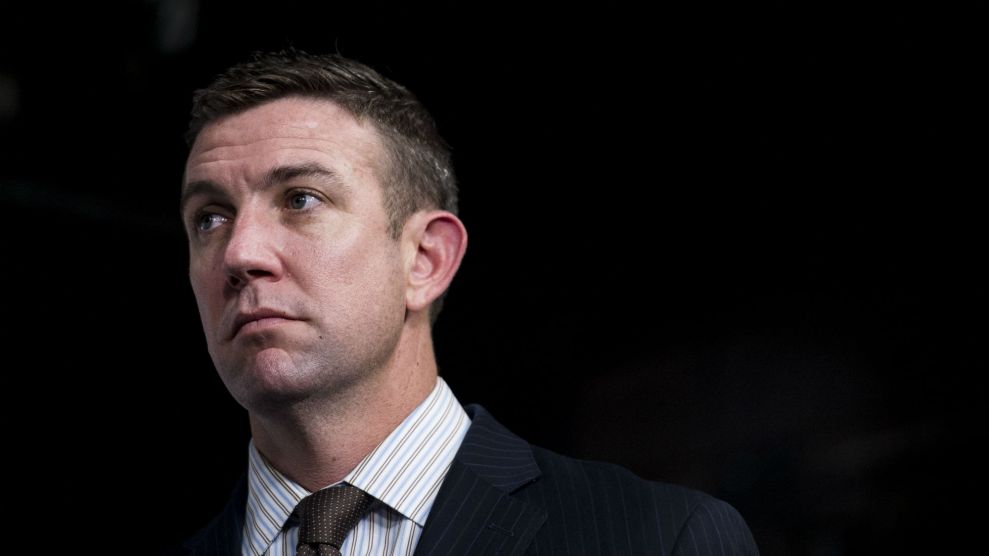 Update (8/22/18): The San Diego Union-Tribune, Hunter’s home paper, published an editorial Wednesday calling on the congressman to resign, writing, “Hunter badly lost his way, seemingly becoming corrupt to the point of caricature. His once-promising political career is now in ruins as a result.”

Duncan Hunter, the Republican congressman who was indicted Tuesday for illegally spending more than $250,000 in campaign funds on personal expenses—including family vacations and tickets to Irish dance show Riverdance—told an ABC affiliate station in San Diego on Wednesday that he is a victim of the “new Department of Justice” and “the Democrats’ arm of law enforcement.”

“It’s happening with [President Donald] Trump and it’s happening with me,” he told 10News before embarking on a fishing trip with a veterans group. “We’re going to fight through it and win and the people get to vote in November…I think they’ve used every dirty trick in the book, so it’ll go to court when they want it to.”

Rep. Duncan Hunter & wife indicted on charges of fraud and misusing campaign money for personal expenses. I caught up with him as he headed out for a fishing trip with Rivers of Recovery, a non-profit that works with wounded combat veterans. Here’s what he had to say: pic.twitter.com/dLUnl9cRMf

Hunter, who represents parts of San Diego County in the US House and is up for reelection this November, vehemently denied that he’s misused funds and said he’s “looking forward” to going to trial. He also accused Democrats of using the indictment as a strategy for the midterms.

“It’s politically motivated,” he said. “It’s the last chance they could do this before the election. This is how they want to win the election. It’s easier doing this than actually running for office.”

Prosecutors allege that Hunter and his wife—who was also implicated in the 47-page indictment and who served as Hunter’s campaign manager—were well aware of what they were doing, often attempting to cover up their purchases by saying they were for charity. According to the document, Hunter installed his wife as a paid campaign manager, over the protests of the campaign’s treasurer, in part because the Hunters “need[ed] the extra money” from her salary. Over a seven-year period, the family overdrew their personal bank account more than 1,100 times. The Hunters’ financial woes, the indictment alleges, meant they knew that they had to use campaign money to maintain their lifestyle.

When questioned about various charges by the campaign’s treasurer, Hunter accused the campaign staff of “trying to create some kind of paper trail on me.” And when pressed by the treasurer to comply with internal rules to track funding, Hunter described them as “silly.”

The investigation into Hunter’s potential campaign finance violations began last year. Hunter, who was one of the first members of Congress to endorse Trump, is the second Republican lawmaker in recent weeks to be indicted: Rep. Chris Collins (R-N.Y.) was charged with insider trading earlier this month.

Here are some of the wildest purchases the Hunters made with campaign funds, according to the indictment:

And read the full indictment below: