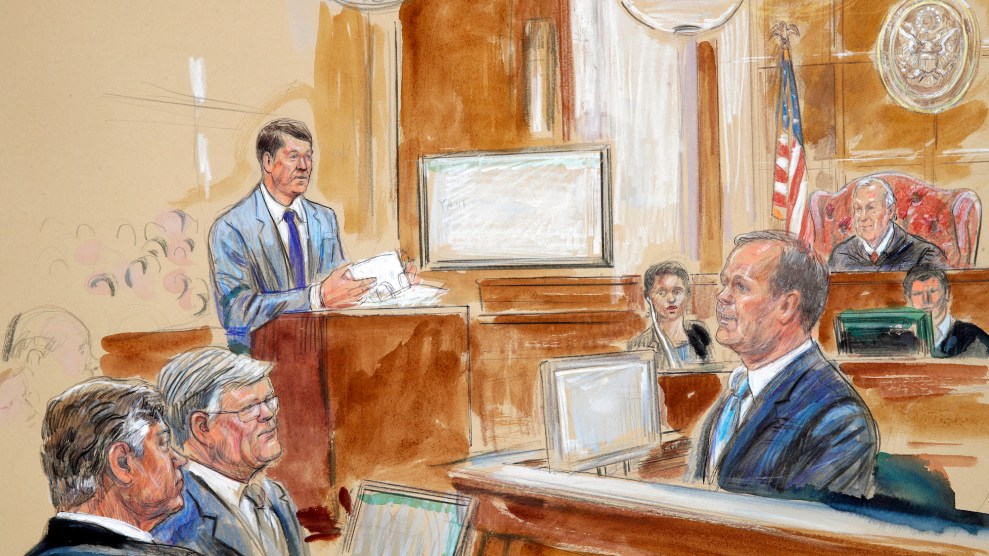 The trial of former Trump campaign chairman Paul Manafort is not about collusion, but it is very much about corruption. On Tuesday, Manafort’s longtime business partner Rick Gates, who is testifying against his old boss in exchange for leniency, described how he helped Manafort transfer illicit payments from allies of former Ukrainian President Viktor Yanukovych, move these funds through shady offshore banks, avoid US taxes by falsely describing income as loans, and defraud banks through false financial claims. Here are some of the lowlights from Tuesday’s testimony.

Lies about loans: Prosecutors used many of their questions to Gates to make the case he helped Manafort dodge income taxes. Gates said Manafort routinely claimed, falsely, that payments he received from Ukraine were loans in order to reduce his tax liability. Gates said he drew up fake loan agreements to support those claims, though Manafort had no intention of repaying the supposed loans. In 2015, when Manafort hit financial trouble, he began applying for bank loans using properties he owned as collateral. To get better loan terms, Manafort needed to boost the income he claimed in applications. So Manafort had Gates claim that payments they previously called loans were in fact income.

Gates testified that various financial professionals appear to have conspired with Manafort to help him evade taxes and lie on loan applications. Prosectors previously elicited from Manafort’s former accountant, who was given immunity, an admission that she allowed Manafort to make tax claims she believed to be false. Manafort’s former son-in-law has also pleaded guilty and cooperated with prosecutors with evidence suggesting he helped Manafort make false claims to banks. Prosectors released new information Tuesday suggesting Manafort tried to get a job in the Trump administration for a banker who helped him secure a large loan. According to court filings, Stephen Calk, head of the Federal Savings Bank in Chicago, agreed to loan Manafort $16 million in 2016 based on fraudulent financial claims. Within days, Manafort arranged to place Calk on a panel of economic advisers to the Trump campaign. Manafort also sought to make Calk Trump’s Army Secretary. In a November 24, 2016 email disclosed in court Tuesday, Manafort wrote to Gates: “We need to discuss Steve Calk for Sec of Army.” That December, Manafort, who was ousted from the Trump campaign in August 2016 due to his Ukrainian ties, also contacted Gates, who worked for Trump’s inaugural committee, to seek inaugural tickets for Calk and Calk’s son. Calk did not get the Army Secretary job.

Gates cheated on his wife: Under withering questioning by Manafort’s lead attorney Kevin Downing, Gates admitted that he had an extramarital affair “about decade ago.” Asked by Downing if he led a “secret life,” Gates said that he had “another relationship.” He said he rented an apartment in London for two months, stayed in luxury hotels, and flew first class as part of the affair.

Gates stole from Manafort: Even as he drafted phony invoices to allegedly help Manafort hide money, Gates said he also drew up fake expense reports to steal hundreds of thousands of dollars from Manafort’s company. Gates could do that because Manafort had given him power to request wire transfers from accounts in Cyprus. “I was living beyond my means,” Gates explained. “It was a difficult time. I regret it, clearly. I’m taking responsibility for it.”

Gates may have ripped off Trump’s inaugural committee: Pressed by Downing, Gates said “it’s possible” that he improperly submitted personal expenses to the Trump inaugural committee, where he held a senior role during the presidential transition. Gate’s admission raises new questions about what he knows about accounting problems with the committee, which has failed to fully explain how it spent the record $107 million it raised. The committee paid $26 million to an event planning firm started by an adviser to First Lady Melania Trump, but it has not explained what she did for that fee. Special Counsel Robert Mueller is also reportedly investigating whether foreign donors, in particular those from Russia and the United Arab Emirates, used American straw donors to steer money to the committee, which would be illegal.

Gates had lots of legal issues: Gates testified that, in connection with a film and public relations venture he launched, he wrote a letter for a film producer, Steven Brown, that falsely inflated the amount a potential partner was willing to invest with Brown. Gates said he wrote the letter “as a favor” to Brown, who wanted to use it as leverage in another negotiation. Gates said prosecutors later told him he may have committed fraud by writing the letter. Brown pleaded guilty in April to defrauding investors. Gates also admitted that he had received a letter from the Securities Exchange Commission related to whether he engaged in insider trading through his seat on the board of an identity-theft protection firm.

Gates might know more about Trump and Russia. Both Manafort and Gates were in touch during the 2016 election with Konstantin Kilimnik, Manafort’s longtime business associate in Ukraine. Prosecutors allege Kilimnik had active ties to Russian intelligence in 2016. While prosecutors have said they won’t bring up allegations that Manafort conspired with Russia during his trial, there was a hint Tuesday that Gates may have information on that front. On Tuesday, Downing asked Gates if he was interviewed by “other lawyers in the Office of Special Counsel” separate from those working on the Manafort case about “your time on the Trump campaign.” Gates said he had been. Prosecutors objected before Downing could press Gates further. After a conference with Judge T.S. Ellis, Downing dropped the topic.

Gates is scheduled to continue his testimony on Wednesday.