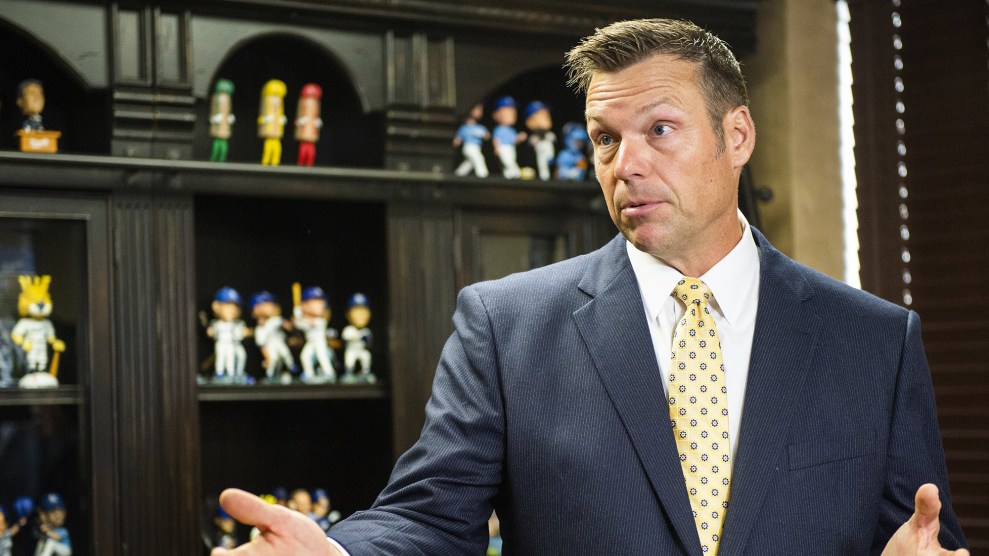 Kansas Secretary of State Kris Kobach talks to reporters the day before the Republican primary in Kansas.Shelly Yang/TNS via ZUMA

Tuesday’s too-close-to-call Republican primary election for Kansas governor has plunged the state into an ethics crisis. Secretary of State Kris Kobach emerged with a 121-vote lead over incumbent Gov. Jeff Colyer, and a recount appears inevitable. But Kobach, the most prominent national advocate for policies that make it harder to vote, is in charge of overseeing the state’s elections. After days of mounting pressure, Kobach on Friday agreed grudgingly to let his top deputy oversee the recount. Still, that doesn’t negate the glaring conflicts of interest in a race where a candidate has shaped the state’s election policies from the start and, if he emerges on top, will oversee his general-election race this fall.

The episode highlights an oddity of state-level politics: secretaries of state presiding over their own elections. This year, three Republican secretaries of state with a history of restricting access to the ballot will be presiding over elections in which they are a candidate for higher office. The potential for conflict is not new, nor is it not limited to one party. But in an era where voting rights are an increasingly partisan issue, having politicians overseeing elections—particularly their own—creates an additional incentive for dishonest or politically motivated election oversight.

It’s a problem that most Western democracies don’t have; instead, nonpartisan professionals administer elections. But in the United States, says Rick Hasen, an election law expert at the University of California, Irvine School of Law, conflicts of interest are inevitable. Many elected secretaries of state with aspirations to higher office feel an allegiance to their party, whose support they’ll need. “But the problem is of a different magnitude when the elected official is supervising an election or a recount where the secretary himself or herself is on the ballot,” Hasen said in an email. “There the conflict of interest is extreme and the best course of action is for the secretary to recuse from all decisions involving the counting of votes, recounts, and any further legal or administrative action. No person should be a judge of his or her own case.”

Kobach has insisted there is no conflict overseeing a recount of his own race. “The recount thing is done on a county level, so the secretary of state does not actually participate directly in the recount,” Kobach said Wednesday, two days before he recused himself. “The secretary of state’s office merely serves as a coordinating entity overseeing it all, but not actually counting the votes.”

But there is the potential for Kobach to shape the outcome. The day after the election, Kobach appeared to lead with 191 votes. That margin was slashed by 100 votes when it turned out that one county had reported 522 votes for Colyer, but the secretary of state’s website showed 422. The county clerk blamed Kobach’s office for entering the wrong number into its system. (Kobach’s lead grew to 121 on Thursday when certain county vote totals were adjusted.) A spokesman for Colyer also told the Kansas City Star that Kobach’s office had instructed local officials to disregard mail-in ballots if the postmark is smudged. Colyer is counting on mail-in and provisional ballots to erase his deficit in the race.

Even before Tuesday, Kobach helped set the policies that determined who could vote in Kansas. Early in his tenure, Kobach lobbied the state legislature to pass a draconian voter ID bill that required photo identification to cast a ballot and proof of citizenship to register to vote. Due to this provision, between 2013 and 2016, more than 16,000 people had their voter registrations canceled, and more than 31,000 Kansans had been blocked from registering to vote. In June, federal judge Julie Robinson threw out the proof-of-citizenship requirement because “the magnitude of potentially disenfranchised voters…cannot be justified by the scant evidence of noncitizen voter fraud.”

Two other Republican secretaries of state who have pushed for similarly restrictive voting regulations are also running for higher office and overseeing their own races. Brian Kemp, the secretary of state of Georgia, won the state’s Republican primary for governor in July. Kemp has been the subject of multiple lawsuits alleging that his office failed to process the registration applications of minority voters. Last year, Kemp’s office settled a federal suit that accused his office of disenfranchising minority voters by rejecting registration applications on which applicants’ personal information did not exactly match their information in state databases. On several occasions, his office has responded to these allegations by investigating the voter advocacy groups.

Georgia Democrats have called on Kemp to resign as secretary of state while he runs for governor to avoid any conflict, but Kemp has refused. Like Kobach, Kemp defended his decision by pointing out that counting vote totals falls to the individual counties, not the secretary of state. “For anyone to think there’s a way to manipulate the process because you’re secretary of state is outrageous,” he said, according to the Atlanta Constitution-Journal.

In Ohio, Republican Secretary of State Jon Husted is running for lieutenant governor in November. He has purged more than 2 million people from the state’s voter rolls since taking office in 2011. In a close race this fall, it’s possible that those purged voters could have made the difference.

There are myriad ways a secretary of state can hinder a political opponent. For example, Florida voters almost lost their chance to register to vote in fall 2016 when Hurricane Matthew caused mass evacuations ahead of the registration deadline. The Republican secretary of state, Ken Detzner, refused to extend the deadline. State Democrats sued, and a federal judge ultimately extended it. Kemp was also sued for not extending registration in his state, which was also slammed by the storm, but Kemp prevailed.

The most famous case of a secretary of state with a conflict of interest came in 2000, when Florida Secretary of State Katherine Harris, a co-chair of George W. Bush’s Florida campaign, oversaw the Florida recount that handed Bush the presidency. Four years later, Ohio Republican Secretary of State Ken Blackwell co-chaired Bush’s Ohio campaign while overseeing the election in the hotly contested swing state. Blackwell was sued for engaging in voter suppression tactics targeting Democratic voters, including instructing to local poll workers to deny provisional ballots to voters who didn’t meet certain criteria. In another maneuver, he required all voter registration applications to be submitted on 80-pound cardstock. In 2006, Blackwell remained secretary of state while running for governor.

Blackwell forced Ohio to grapple with an ultra-partisan secretary of state using his office to influence an election. “Can an elections chief be so partisan that his ability to manage a clean vote comes into question?” the Columbus Dispatch asked in a 2005 editorial. “In Blackwell’s case, yes.” In 2007, experts at Ohio State University studied Blackwell’s tenure and recommended that the state make the secretary of state position nonpartisan. Last year, Blackwell was named to Trump’s voter integrity commission, overseen by Kobach.

As debates surrounding ballot access become increasingly partisan, secretaries of state have become more tempted to administer elections in a partisan way. Voter ID policies, strict registration requirements, and voter fraud alarmism can help Republican secretaries of state win supporters in their party and climb to higher office, but they rarely, if ever, create fairer elections. “Secretary of state is increasingly a kind of politicized position, where you can go from secretary of state and run for governor, run for higher office,” says Michael Kang, an election law expert at Northwestern Pritzker Law School. In years to come, Kang believes, the conflicts of interest will only get worse.