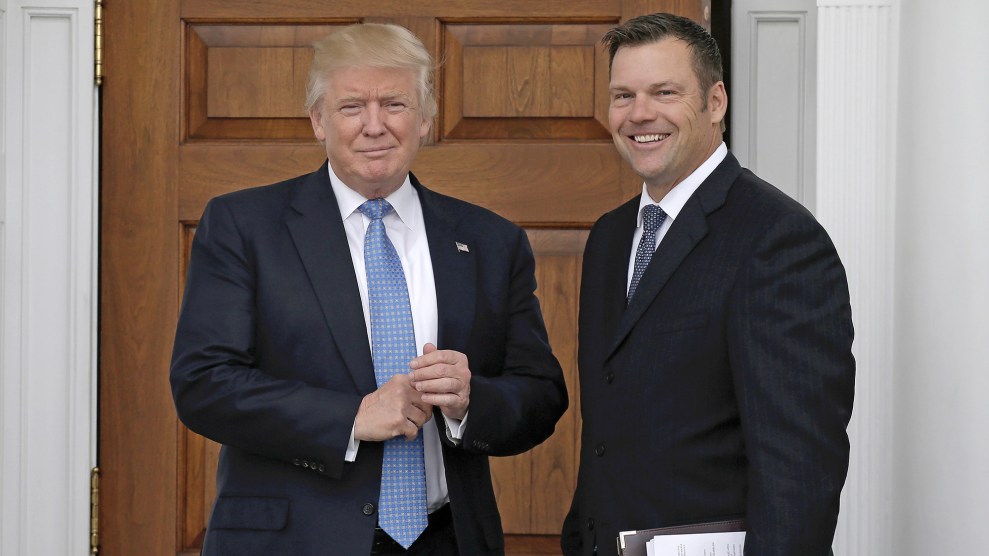 Kris Kobach, the country’s most prominent champion of anti-immigrant policies and restrictive voting laws, is clinging to a tiny lead in Tuesday’s Republican primary for Kansas governor, but the results are too close to call. Should he clinch the nomination in the coming days, Kobach could move deep-red Kansas even farther to the right—or he could turn off enough moderate Republicans for Kansas to do the unthinkable and elect a Democratic governor.

Kobach, Kansas’ secretary of state, led the current governor, Jeff Colyer, by a mere 191 votes on Wednesday morning. Election officials must still count mail-in and provisional ballots, followed by a potential recount. Kobach, as the state’s chief election officer, will oversee this process. Should Kobach win, he will do so with a plurality of about 40 percent of the vote, since a handful of moderate candidates won a total of about 20 percent.

Kansas does not have an automatic recount mechanism, but either candidate can request a recount, as can registered voters and election officials. If the margin in the race is less than 0.5 percent—as will almost certainly be the case here after the final ballots are counted—the state will pay for the recount.

Kobach, boosted in the final day of the race by an endorsement from President Donald Trump, ran as a hard-right candidate who embraced the president’s anti-immigration fervor. Kobach tried to consolidate the support of conservatives and staunch Trump supporters in the state—a strategy that may ultimately win him the nomination but could make his election in November more difficult. Should Kobach come up short in the primary or the general election, it will be an embarrassment to Trump and a signal of the limit of his kingmaker status.

Kansas Republicans have grown increasingly divided between moderates and arch-conservatives like Kobach, leaving an opening for his defeat in November. The former Republican governor, Sam Brownback, left the party in disarray by ushering in extreme tax cuts, vetoing a Medicaid expansion, and bringing the state to the brink of a constitutional crisis in a showdown with the state supreme court—all over the objections of moderate Republicans. In the final year of Brownback’s administration, he presided over a legislature that, though controlled by Republicans, was actively trying to undo his legacy and overrode his veto to raise some of the taxes he had cut. Brownback left office in January to join the Trump administration as its ambassador-at-large for international religious freedom, and Colyer succeeded him.

The GOP moderates who battled Brownback have no love for Kobach, who ran as a Brownback-style Republican but with the addition of Trump’s staunch anti-immigration agenda. He campaigned on reinstating Brownback’s most extreme tax cuts and promised to slash spending in order to balance the budget. But Brownback’s cuts have grown increasingly unpopular as they force the state to slash spending on schools, roads, and bridges. “It is time for a change,” Kobach told the New York Times recently. “But the time for a change doesn’t have to be in a leftward direction.”

Kobach would also bring Trump’s anti-immigrant crusade to the governor’s mansion. Kobach rose to national prominence as the architect of Arizona’s extreme anti-immigrant bill, SB1070, in 2010, as well as similar legislation in Alabama and in multiple cities, which generally failed to withstand legal challenges. As secretary of state, Kobach pushed a voter ID law that required documentary proof of citizenship in order to register to vote. Kobach humiliated himself earlier this year when he defended that law in court; not only did he lose, but his team made so many basic legal errors that the judge ordered him to take six hours of continuing legal education on how to present evidence at trial.

But Kobach’s reputation as a foe of voter fraud (though studies show the incidence of fraud is exceedingly rare) led him into Trump’s inner circle. Last year, Trump made him vice chair of the presidential commission on election integrity, which Trump convened following his assertion that millions of people had voted illegally in the 2016 election. Trump disbanded the commission in January, which was under siege by multiple lawsuits from government watchdogs and voting rights advocates. Documents released just last week show that Kobach and the other voter fraud alarmists on the commission were trying to document the threat of voter fraud even though they’d found no evidence.

Democrats see an opportunity to win the Kansas governorship should Kobach become the nominee. They also believe having Kobach on the ticket in November could supercharge Democratic turnout and help them win two congressional seats in the state. Republicans feared that outcome as well, and the Republican Governors Association lobbied Trump in vain not to endorse Kobach.

But Democrats have their own problems that could tank their prospects in November, most notably a potential spoiler campaign from independent gubernatorial candidate Greg Orman. A former independent candidate for the US Senate whom Democrats rallied around in 2014, Orman has infuriated the party this year by self-funding a gubernatorial campaign that could siphon enough votes from the Democratic nominee, state Sen. Laura Kelly, to make Kobach the next governor.