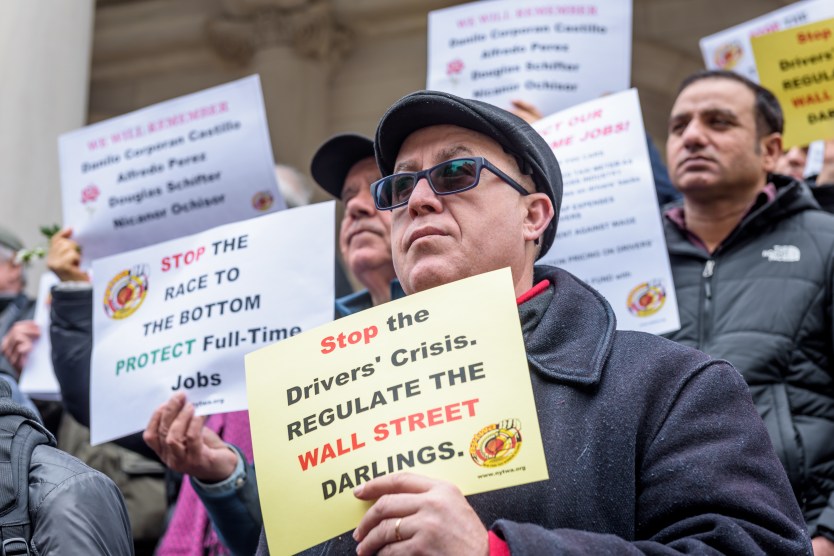 On Wednesday, the New York City Council passed a landmark set of bills aimed directly at Uber and other ride-hailing services that will force the companies to pay drivers a minimum wage and sets a cap on how many cars can be on the road. New York City’s new regulations could set a precedent for other cities across the country that face increasingly congested roads and drivers frustrated with the depreciating value of their services.

The set of bills will give the city’s Taxi and Limousine Commission the authority to instate minimum fare requirements, regulate minimum earnings for drivers, and institute a 12-month cap on additional licenses while the city evaluates the effects on companies, including Lyft, Uber, Juno, and Via, and on city congestion.

Many of the details still need to be clarified by the commission, though the guaranteed wage has to at least match the state minimum wage of $13.50 (rising to $15 in December), and the commission has the option of increasing that amount. While studies show conflicting numbers on the average earning for an Uber driver, most are in agreement that wages fall below a $15 minimum wage. A report from New York City’s taxi commission suggested the minimum wage for drivers should start at $17.22.

“Workers and New York leaders made history today,” Ryan Price, executive director of the International Drivers Guild, said in a statement. “It’s not easy taking on Silicon Valley behemoths, but we kept on fighting for what we know is right and today the workers prevailed.” The vote was a clear reversal of where the city government stood just three years ago, when Mayor Bill de Blasio’s administration backed down at the last minute from a City Council bill that would have capped Uber’s growth.

“Our city is directly confronting a crisis that is driving working New Yorkers into poverty and our streets into gridlock,” de Blasio said in a statement after Wednesday’s vote. “The unchecked growth of app-based for-hire vehicle companies has demanded action—and now we have it.”

IDG, a union which represents over 65,000 app-based drivers, teamed up with the New York Taxi Worker Association on a multi-year campaign to get the bill in front of the council, starting with a petition two years ago.

Uber opposed the new cap on the number of licensed cars, arguing that the change won’t make a difference for the city’s problems with congestion and could in fact hurt residents in areas with insufficient public transit. “Cities are going to see that pausing the number of vehicles isn’t going to solve broken transit,” a spokesperson for Uber told Mother Jones.

At Wednesday’s vote, council members stressed that the measure was not designed to decrease availability of cars, but instead better maximize New York’s roads. One 2017 report found that app-hailed cars spend nearly as much time idling on New York City streets as carrying passengers. Capping the number of licenses, advocates say, will help better utilize existing fleets and stall decreased values of traditional medallion cabs.

The new laws give the Taxi and Limousine Commission the authority to grant new licenses at any time if there is demonstrated consumer demand. A representative for Uber told  Mother Jones that the company hopes to enlist drivers with already licensed vehicles and encourage car sharing amongst its existing contractors to keep up with demand. Right now, there are approximately 120,000 licensed vehicles in New York.

Advocates for the new set of bills, led by Council Speaker Corey Johnson, cited the increasing suicide rates of New York city drivers feeling the economic crunch of the new driving economy. In February, livery driver Dough Schifter committed suicide outside of New York City Hall. In a Facebook post written before his death, Schifter cited the inaction of politicians in curbing the number of cars on the street, which stretched his work to 100 hours a week, as the reason for his death. Schifter’s death shed light on several other professional drivers who have committed suicide in the past 12 months.