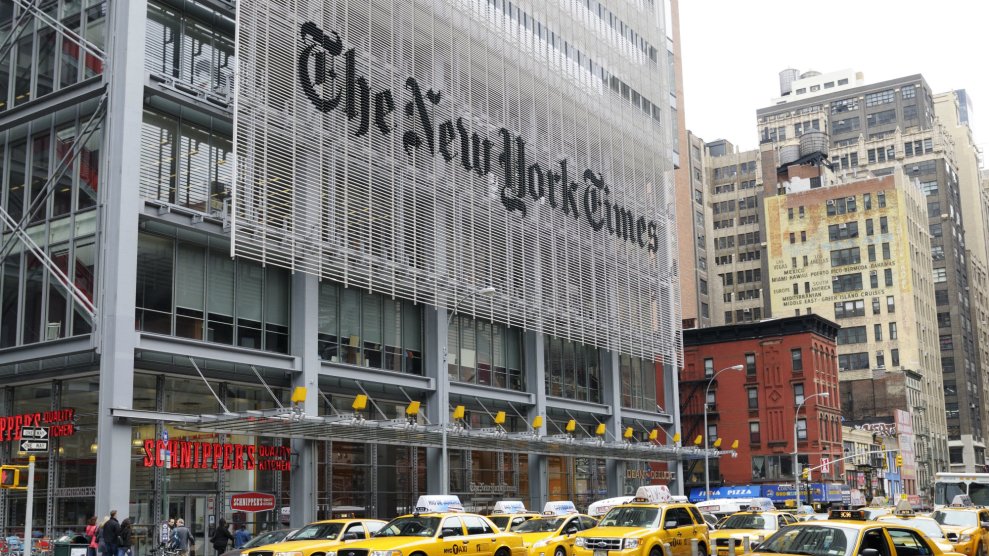 The New York Times Magazine has just published an ambitious and heavily-promoted issue entitled “Losing Earth,” which is entirely devoted to telling a single complicated story: How the world missed its window to address climate change. Nathaniel Rich’s historical narrative looks at the politicians, scientists, public officials, and others who, from 1979 to 1989, were central to raising the alarm on a subject that scientists had already been studying for years.

In revealing the choices they did and did not make, Rich pinpoints the markers that led us to today, in which the attempt to address climate change is a story of failure. George Steinmetz’s photography of receding glaciers and extreme weather around the world accompanying the issue is a window to the consequences of largely ignoring the early warnings. Today, we’re in what Rich says is the “second chapter—call it The Reckoning. There can be no understanding of our current and future predicament without understanding why we failed to solve this problem when we had the chance.”

“There can be no understanding of our current and future predicament without understanding why we failed to solve this problem when we had the chance.”

Thirty years ago, in his famous testimony to Congress, NASA climate scientist James Hansen warned that we were running out of time to address the consequences of uncontrolled greenhouse gas emissions. “Major greenhouse climate changes are a certainty,” he had written. “By the 2010s [in every scenario], essentially the entire globe has very substantial warming.”

Rich’s story starts even before that testimony, in 1979, when environmental activist Rafe Pomerance discovered mentions of the effect of rising carbon emissions on the future climate in a generally ignored EPA report on coal. He wondered why no one else seemed to be talking about it. From there, Rich unspools a detailed history of how NASA scientist James Hansen and a number of scientists, activists, and politicians, organized around global warming, and how others, namely President George H.W. Bush’s chief of staff John Sununu, tried to scuttle progress. Notably, almost everyone in the story is a man with the exception of some peripheral characters—a female scientist who speaks up in a meeting, and the men’s wives. Rich concludes with the first major global conference in Noordwijk, the Netherlands, in 1989, which became the first in a very long series of meetings that have avoided taking binding action to slash emissions.

This all took place before partisan lines had calcified. Indeed, by today’s standards, there was unheard-of agreement across party lines. George H.W. Bush’s Environmental Protection Agency chief William Reilly and Republicans like Rhode Island Rep. John Chafee were early leaders, even though today we mostly remember the role of then-Tennessee Rep. Al Gore, who has since become the embodiment of climate change activism.

The early criticisms of the story, some of which came up at a preview event the Times hosted on Tuesday night for a few dozen scientists, academics, sources, and reporters, zero in on Rich’s unwillingness to assign clear blame. He writes:

A common boogeyman today is the fossil-fuel industry, which in recent decades has committed to playing the role of villain with comic-book bravado. An entire subfield of climate literature has chronicled the machinations of industry lobbyists, the corruption of scientists and the propaganda campaigns that even now continue to debase the political debate, long after the largest oil-and-gas companies have abandoned the dumb show of denialism. But the coordinated efforts to bewilder the public did not begin in earnest until the end of 1989. During the preceding decade, some of the largest oil companies, including Exxon and Shell, made good-faith efforts to understand the scope of the crisis and grapple with possible solutions.

Al Gore, who was then chair of an oversight science committee, clearly saw the need to simplify the narrative in order to both dramatize environmental stories and create compelling political theater. “Environmental and health stories had all the elements of narrative drama: villains, victims and heroes. In a hearing, you could summon all three, with the chairman serving as narrator, chorus and moral authority,” Rich writes, summarizing Gore’s approach.

“Environmental and health stories had all the elements of narrative drama: villains, victims and heroes. In a hearing, you could summon all three, with the chairman serving as narrator, chorus and moral authority.”

But Rich doesn’t follow that narrative trope, and he presents the fossil fuel industry as a willing partner in action in those early years. That account is contested by the story’s critics, who point to industry efforts beginning in the 1980s to seed confusion.

In the early 1990s, industry interests including the National Association of Manufacturers and the American Petroleum Institute formally launched the Global Climate Coalition, which was responsible for a series of misinformation campaigns and lobbying efforts to derail action. (Please read Inside Climate News‘ blockbuster investigation into Exxon to complement the Times story).

Specifically, he does not target the oil and coal industries that had the most to lose, or conservative Republicans for scuttling action in these early years. And while you do learn how Reagan and Bush officials helped to block and delay action, Rich ends the story by pointing to human folly, not specific actors. Sununu is quoted saying a strict global deal “couldn’t have happened” anyway because of the competing national interests of individual countries.

Sununu did have one point. If climate change were as simple as one nation taking the lead—even the nation that is historically the biggest polluter—then slashing emissions would not continue to be so difficult. And there are important omissions. The Times story doesn’t address how a more meaningful agreement in the mold of the earlier Montreal Protocol on chlorofluorocarbons could have changed China’s or India’s course adopting fossil fuels. (Perhaps that could be the subject of another 30,000 words).

Much as New York Magazine’s “Uninhabitable Earth” cover story did a year ago, “Losing Earth” expands the conversation to include a broader audience when too few outlets connect the dots to the freakish weather we’re seeing around the globe. In asking how we got to this point, this retelling could provide fuel to both side’s arguments in the new liability lawsuits against big oil companies for their role in creating this mess.

The history of climate change non-action in the United States is a difficult one to tell. A few years ago, I asked four leading environmentalists for their theories on exactly what point climate change became so polarized and received four different answers. One person blamed Al Gore for politicizing the issue, while another blamed Big Oil’s misinformation campaign. Even if reading this 30,000-word exploration doesn’t resolve the issue, it goes a long way to filling in more pieces of the puzzle.