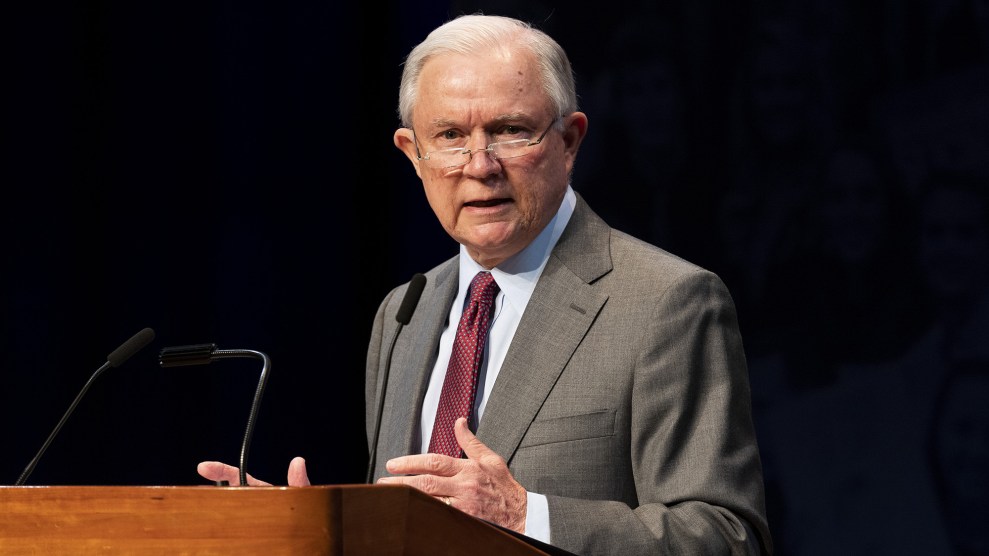 President Donald Trump triggered a new wave of panic in Washington, DC, on Wednesday morning when he urged Attorney General Jeff Sessions to end special counsel Robert Mueller’s investigation into Russian interference in the 2016 election. To comply, Sessions would have to revoke or redefine his recusal last year from any investigations into the 2016 race—prompting the question of whether there is any recourse to protect Mueller or his probe.

..This is a terrible situation and Attorney General Jeff Sessions should stop this Rigged Witch Hunt right now, before it continues to stain our country any further. Bob Mueller is totally conflicted, and his 17 Angry Democrats that are doing his dirty work are a disgrace to USA!

Sessions recused himself from election-related investigations on March 2, 2017, following the revelation that he had twice met with the Russian ambassador during the 2016 campaign yet failed to disclose the meetings, which came to light during his confirmation hearing when he was asked whether he had met with any Russian officials. Sessions  based his recusal on Justice Department regulations that require recusal when a department attorney has a close political or personal relationship with any person or campaign organization involved in an investigation. Sessions, who served as the top foreign policy adviser to Trump during the campaign, met these requirements.

But there’s no internal mechanism for holding Sessions to his recusal. As Mother Jones reported earlier this year, the attorney general is generally ultimately responsible for enforcing recusals in the Justice Department, which means there is effectively no one to enforce his own recusal. Trump could theoretically fire Sessions for abandoning or limiting his recusal. But in this case, the opposite nearly occurred: Trump came very close to firing Sessions because of his recusal, and may fire him in the future unless Sessions breaks or discards it. Many experts in judicial ethics believe Sessions has already violated his recusal on multiple occasions, with no apparent consequences.

Should Sessions fire Mueller or intervene in the probe, the only potential recourse would be through the courts—and even that route is hazy. While internal Justice Department regulations are not laws, the Supreme Court has held that an agency must follow those rules unless the department first repeals or rewrites them, according to Andrew Kent, a judicial ethics expert at Fordham University School of Law.

Under the department’s special counsel regulations, Mueller can be fired only for “misconduct, dereliction of duty, incapacity, conflict of interest, or for other good cause, including violation of Departmental policies.” To fire him, Sessions would be required to put in writing “the specific reason for his or her removal.”

If Sessions or anyone else did remove Mueller without sufficient justification, Mueller himself might be the only person with standing to sue for violation of the special counsel regulations, according to Stephen Gillers, an expert in judicial ethics at New York University School of Law. Mueller might not want to bring a high-profile lawsuit, instead opting to let the political process sort out the situation.

Sessions might have a personal incentive to maintain his recusal. It’s unknown how the next administration will approach the scandal, including the behavior of Trump and his top officials should they shut down or rein in the investigation. “If Sessions revokes his recusal and then fires or limits Mueller to appease Trump,” says Eric Columbus, an attorney who served in the office of the deputy attorney general during the Obama administration, “he could be subject to obstruction of justice charges brought by a future [Justice Department].” Even if the ethical and political consequences of breaking his recusal won’t stop Sessions, the threat of prosecution might.