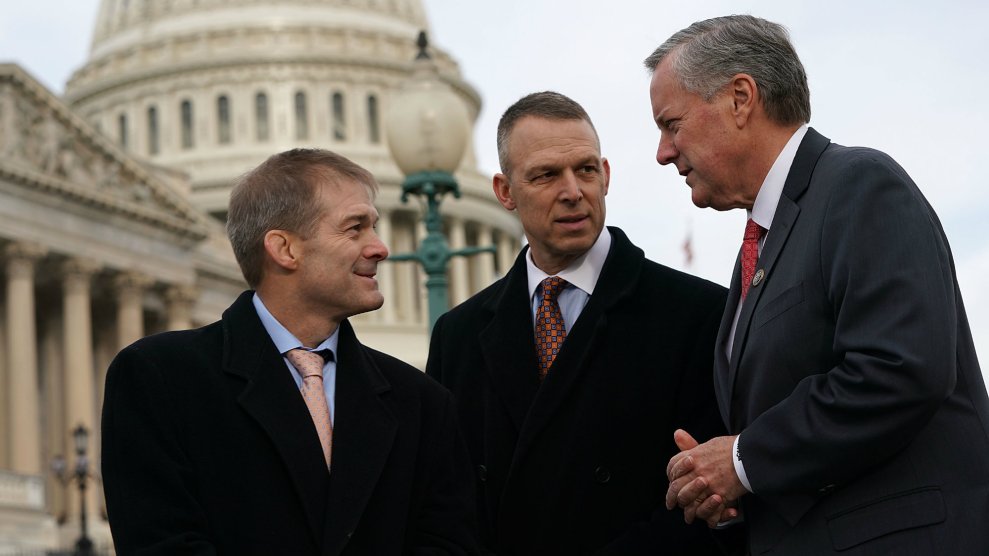 The rabble-rousing, deficit hating, far-right Freedom Caucus has been a perennial thorn in the Republican establishment’s side since they first appeared with just nine members in 2015. Speaker Paul Ryan (R-Wis.) was barely able to keep them in line long enough to squeak through a repeal of the Affordable Care Act through the House last year. It was one of the few instances where Ryan emerged less scarred by an encounter with the caucus than his predecessor, former Speaker John Boehner, who once observed to Politico, “They can’t tell you what they’re for. They can tell you everything they’re against. They’re anarchists. They want total chaos.” In the fall of 2015, rancor from the far-right segment of his membership drove him to give up the speaker’s gavel.

Democrats are widely expected to regain control of the House in November for the first time in six years. But, even if the Freedom Caucus is demoted to a role in the minority party, it will almost certainly grow in size. Only five of the group’s roughly 34 members are in competitive races this fall and, depending on the success of 11 Freedom Caucus-backed Republicans vying for open seats, the ranks of its members could swell by nearly 20% next year, according to a Mother Jones analysis. The Freedom Caucus does not make its list of members publicly available, so this analysis used donations from the group’s political action committee, the House Freedom Fund, as an unofficial marker that shows which incumbents and Republicans vying for open seats are allied with the group.

They will have strength, certainly, within the conference. The future of the Freedom Caucus in any Congress is not going to change unless you have redistricting.”

“They will have strength, certainly, within the conference,” said Nadeam Elshami, former chief of staff to House Democratic Leader Nancy Pelosi. “The future of the Freedom Caucus in any Congress is not going to change unless you have redistricting.”

At least 24 Freedom Caucus members are in seats they have more than an 82% chance of holding, according to election analysis by FiveThirtyEight. In 14 deep-red districts, incumbents like current caucus leader Rep. Mark Meadows (R-N.C.) and loyal Trump allies Rep. Louie Gohmert (R-Texas) and freshman Rep. Matt Gaetz (R-Fla.) have more than a 99% chance of retaining their seat.

The rosy picture most Freedom Caucus members are seeing in their own races contrasts with a treacherous election season for the rest of the Republican conference. Twenty-eight Republican-held seats are considered toss-ups by Cook Political Report, a nonpartisan election handicapper; only two Democratic seats are.

Nonetheless, for some Freedom Caucus members, reelection will not be so easy.

“Unlike many of the more centrist Republicans who are accustomed to battling Democratic challengers, many of the most vulnerable Freedom Caucus members are running with less money in the bank and in districts where their deeply conservative voting records might not be welcome,” the Wall Street Journal reported in May.

Four years after dethroning House Majority Leader Eric Cantor, for instance, Rep. Dave Brat is fighting for his political life in Virginia against Democratic challenger Abigail Spanberger in a district Trump, Romney, and McCain all won. Rod Blum, whose district in northeastern Iowa went narrowly to Trump, trails Democrat Abby Finkenauer in the most recent polling conducted there. Even though a win would be surprising at this point—FiveThirtyEight only gives Blum a 2.5% chance of retaining his seat—the Freedom Caucus still funneled $54,800 to him this cycle through the House Freedom Fund. Only one incumbent seeking reelection, Rep. Ralph Norman (R-S.C.), has received more money from the Freedom Caucus PAC than Blum.

The Freedom Caucus imprimatur has not been a blessing for all candidates. In Pennsylvania and Ohio, Republicans supported by the centrist Defending Main Street super PAC defeated three Freedom Caucus-backed challengers. In the special election to replace retiring Rep. Pat Tiberi in Ohio, the Freedom Caucus PAC dumped $74,106 in support of Melanie Leneghan, the largest contribution made all cycle to any candidate. She lost by 653 votes to Troy Balderson, who ended up winning the seat. The Freedom Caucus fared better in Arizona where preferred candidate Debbie Lesko emerged from a primary against 11 other candidates and ultimately won the seat.

As frustrated as Freedom Caucus members get with moderate Republicans, they will undoubtedly chafe at the prospect of the Democrats controlling the House. Should party control flip, Democratic committee chairs will likely launch investigations into Donald Trump’s personal finances, amp up the existing probes into Russian election interference, and end far-right lawmakers’ focus on anti-Trump bias in the Justice Department. Meadows and Freedom Caucus co-founder Rep. Jim Jordan (R-Ohio), who once drew Trump’s ire on Twitter due to their opposition to an early version of Ryan’s Obamacare repeal, have grown closer to him through a shared suspicion of Special Counsel Robert Mueller’s investigation into whether the Trump campaign colluded with Russia to influence the presidential election.

But if their past action predicts their future behavior, the Freedom Caucus could inadvertently help a new Democratic majority by splintering the Republican conference.

“They have repeatedly tied the Republican speaker’s hands on spending fights and ended up giving Democrats more leverage,” Elshami said. “You could see the conference moving even further to the right, which would give power to those Republicans who would be willing to negotiate and talk to Democrats to pass bipartisan legislation.”