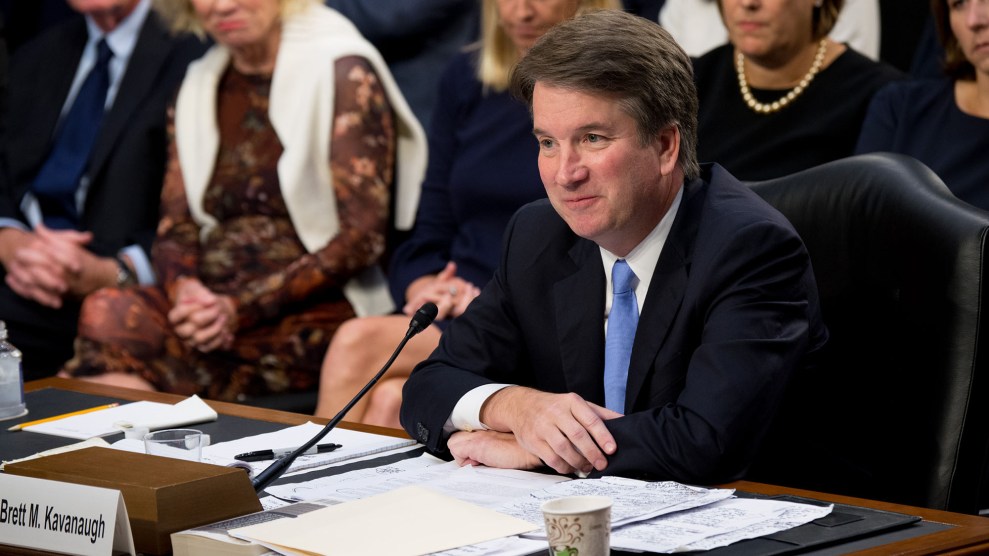 Bretty Kavanaugh appears before the Senate Judiciary Committee for day three of his confirmation hearing in September. Erin Scott/ZUMA

On the precipice of his confirmation to the Supreme Court, Brett Kavanaugh stands accused of drunkenly assaulting a 15-year-old when he was in high school. A friend who was allegedly present for the assault, Mark Judge, actually wrote a book about being an alcoholic in high school. Kavanaugh appears to make an appearance in the book under the name “Bart O’Kavanaugh,” in which he “puked in someone’s car” and “passed out on his way back from a party.”

In April 2014, Kavanaugh gave a speech to the Yale Law School Federalist Society in which he recalled drinking and partying in law school. The speech recalls innocent hijinks, but in light of the accusations now leveled against him, they provide context to Kavanaugh’s partying, though they happened several years after the alleged attack would have taken place.

Here is an excerpt of that speech:

We had a good run my third year. We got our work done, but we had our share of fun. During our third year class party, it was a beautiful night then as it is tonight. We were at the Lawn Club. No one had done their SAWs. Most people didn’t even have their topics yet. But we didn’t care that night. We had a memorable evening. It is fair to say that we had a few drinks. Indeed, as a classmate of mine and I were reminiscing and piecing things together the other day, we think we had more than a few beers before the banquet. Might have been at Toads. Not a good idea.

Anyway, toward the end of the evening a friend of mine who shall remain nameless—and this is a story that is really about a friend of mine, not about me where I am disguising myself as a friend of mine—my friend broke a table in the Lawn Club reception area. Smashed it into multiple pieces. I actually still possess a photo of him sprawled on the floor on top of the table. How’d did he break it, you might ask? The old-fashioned way. He lost his balance and fell into the table, drink in hand, and the table collapsed. My friend was a big guy.

Now, you might think that we would have quickly left the Lawn Club after that, with some sense of shame. But you’d be wrong. My friend actually tried to get another drink at the bar. Proving something I have always known—that bartenders have a lot more common sense than many law school students—the bartender refused to serve my friend.

But that’s where one of our many fond memories of Yale Law School came in. Professor Steve Duke, who himself might have had a few cocktails, came to the rescue and told my friend that he would take care of the situation and argue his case to the bartender. His actual words, as we recalled the other day, were “I’ll take your case.” And sure enough, Steve Duke—or as we called him for reasons too bizarre to recall now, the Dukie-stick—won the case and got my friend some more beers. That’s probably one Professor Duke deserved to lose. The moral of this story: I suppose there are a lot of them. But here’s one I like: Don’t ever let it be said that Yale Law professors are not there when you most need them.