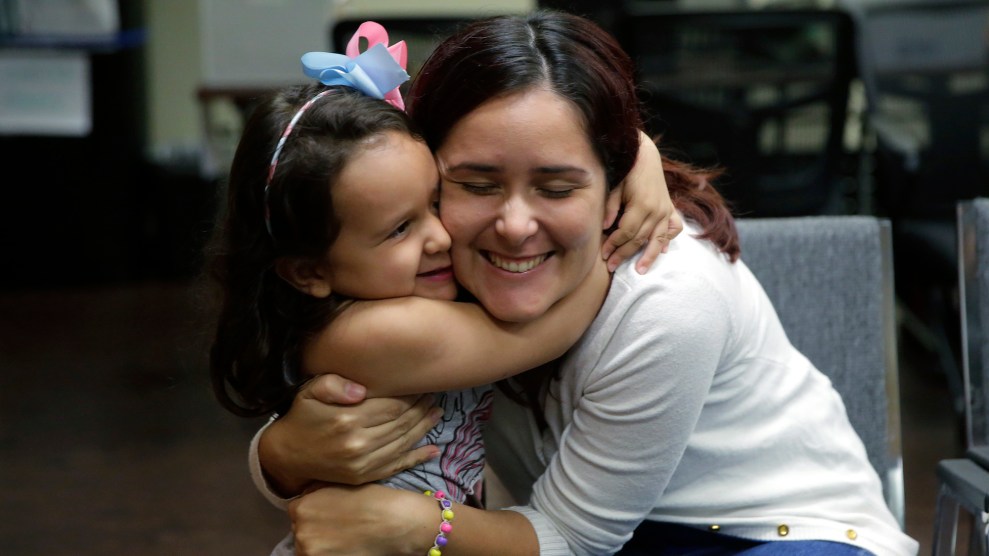 Natalia Oliveira da Silva and her daughter, Sara, 5, hug at a Catholic Charities facility in Texas in July after being separated by the Trump administration. Eric Gay/AP

In February, the American Civil Liberties Union sued the Trump administration to reunite a family separated at the border: a Congolese woman identified in court documents as Ms. L and her seven-year-old daughter. Half a year later, the lawsuit has forced the government to reunite more than 2,000 children with their parents. On Wednesday, the American Civil Liberties Union and other plaintiffs reached an agreement with the Justice Department that caps off separated families’ legal victory over the Trump administration and its now-abandoned separation policy.

The plan, which immigrant advocates say could affect more than 1,000 parents, now needs to be approved by Dana Sabraw, the federal judge who ordered the Trump administration to reunite separated families by late July.

During a Friday court hearing, Sabraw called the agreement a “very detailed, well thought-out proposal that involves many, many stakeholders” and showed “good faith on behalf of all, particularly the government.” Sabraw seemed highly likely to approve the agreement, or a similar proposal, once the parties in the lawsuit have had a chance to submit objections. “It seems to me that this is an excellent proposal and we ought to move forward as quickly as possible,” he said.

Lee Gelernt, the ACLU’s lead attorney in the case, said in a statement on Thursday, “The Trump administration will never be able to erase the full damage of its family separation policy, but this agreement is an important step toward restoring and protecting the asylum rights of impacted children and parents going forward.”

To apply for asylum, migrants must pass a “credible fear” interview that determines whether they are at risk of being persecuted in their home country. Many parents failed those interviews while separated from their children, but immigrant advocates have argued that the trauma of the ongoing separations made them unable to effectively present their cases to asylum officers.

If Sabraw approves the agreement, US Citizenship and Immigration Services, the Department of Homeland Security agency that handles asylum cases, will review the cases in which it decided that parents who were separated from their children did not have a credible fear of persecution. USCIS will speak with them again to gather additional information, and parents will have a chance to present additional evidence with the help of their lawyers. The government and the ACLU agreed that USCIS will also have to consider the “psychological state of the parent at the time of the initial interview” if there are contradictions between the first and second interview. Parents who passed their first credible fear interview will not be affected.

As Vox’s Dara Lind explained on Wednesday, a parent and child seeking asylum in the United States are normally allowed to remain in the country together and both apply for asylum as long as one of them passes a credible fear interview. By separating families, the Trump administration put parents who failed credible fear interviews in the position of having to choose between being deported with their children or leaving them behind in the United States. In essence, Lind wrote, the government “is now agreeing to give up the legal advantages that it accrued by separating parents’ and children’s cases.”

The Trump administration had already separated hundreds of families when the ACLU expanded its case into a class-action lawsuit in early March, according to declarations the ACLU collected from immigrant advocates along the border. Many of those families were separated under a test run of the family separation policy carried out late last year around El Paso, Texas.

The pace of the separations greatly accelerated after DHS and the Justice Department launched a “zero tolerance” initiative this spring that prosecuted parents who crossed into the country illegally and separated them from their children. When Sabraw ordered the government to reunite families in late June, more than 2,000 families had been separated, and widespread outrage had forced Trump to drop his family separation policy the week before. If Sabraw approves Wednesday’s agreement, more than 1,000 migrants could have another opportunity to show that they could be persecuted or even killed if they are deported.