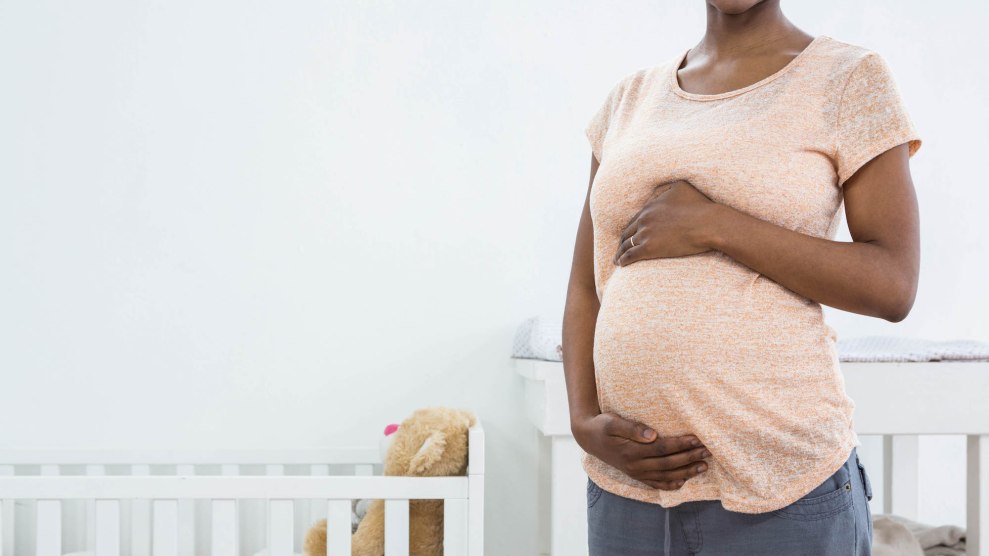 Preeclampsia, a dangerous form of hypertension that can develop during pregnancy or in the days and weeks after childbirth, is one of the most common causes of maternal death and severe complications in the United States. The large majority of deaths occur after delivery, often from strokes.

But you’d never know it from the incomplete, imprecise, outdated, and sometimes misleading information published by some of the most trusted consumer health sites in the country.

Instead, you might come away with the impression that, as Harvard Health Publishing says, preeclampsia “occurs only during pregnancy.”

From an article on the government-affiliated site MedlinePlus, you might conclude that the “cure” for preeclampsia is delivering the baby. Until this weekend, the Mayo Clinic’s site said the same thing. In reality, said Eleni Tsigas, executive director of the Preeclampsia Foundation, even after delivery, “it can still take a while for the mother to get better, and some mothers get worse before they get better.” If treatment is delayed because people believe the danger is in the past, mothers can die.

“It can mean the difference between life and death.”

Preeclampsia has been back in the news, thanks to Beyoncé’s Vogue interview discussing her recent experience with the condition. That’s led to a spike in Google searches of symptoms, preventive measures, and treatments. Many of those readers are going to health websites that regularly make Top 10 lists for trustworthiness, and journalists are linking to the same highly regarded sites in their stories. Yet the information on some of those sites—especially about the risks of preeclampsia in the postpartum period—has been “bad or misleading,” Tsigas said, something she called “really disturbing.”

“It can mean the difference between life and death,” she added.

Preeclampsia affects 3 to 5 percent of expectant and new mothers in the United States, up to 200,000 women a year, and it is responsible for 15 percent of premature births. No one knows what causes it, although the placenta is believed to play a role. As in Beyoncé’s case, the risk factors include having twins, being black, and being over 35. But it can strike any woman, usually after the 20th week of pregnancy, and it can quickly become a crisis. Around the world, preeclampsia kills about five women every hour. At least 60 percent of preeclampsia deaths are preventable, and patient education is an important part of the solution, experts say.

In affluent countries, the condition is highly treatable. Yet in the United States, preeclampsia accounts for 7.4 percent of maternal deaths, according to the Centers for Disease Control and Prevention, killing more than 50 mothers a year—one reason the US has the highest maternal mortality rate in the industrialized world. One of those women was Lauren Bloomstein, a neonatal intensive care nurse in New Jersey, whose 2011 death some 20 hours after giving birth was chronicled by ProPublica and NPR as part of our Lost Mothers project.

The greatest risk is to black mothers, who are more likely to enter pregnancy with chronic high blood pressure and to develop preeclampsia. They are more than twice as likely to die from the condition than white women, the CDC Foundation reported this year. Preeclampsia-related complications are the third-leading cause of maternal deaths among African American women.

After reading reports about Beyoncé, ProPublica took a look at how top health sites discuss preeclampsia. We sent screenshots and links to Tsigas, one of the leading experts on the condition in the United States, for review last week.

Virtually every site we asked her to look at contained some problematic language, Tsigas noted in her written comments. Her biggest area of concern: A number of sites flubbed how they explained postpartum preeclampsia—sometimes mentioning it only in passing, or sometimes failing to mention it entirely. In the case of the Mayo Clinic, the main overview article that had long been on the site had “no mention of postpartum anywhere,” Tsigas wrote. The Mayo Clinic site did discuss post-birth preeclampsia in a separate article, but it didn’t link to that information in its main overview, so it was easy to overlook.

“A lot of the sites are designed by people who don’t understand the importance of informing a variety of women about what their risks are.”

Postpartum preeclampsia can be especially dangerous because the symptoms, including swelling, gastric problems, and headaches, often mirror the discomforts of normal birth. Meanwhile, new moms are often too tired and overwhelmed to go to the doctor or the emergency room unless they are sure something is wrong. Accurate information about post-birth complications is essential, said Cynthia Gyamfi-Bannerman, a maternal-fetal medicine specialist and co-director of the Columbia University Preterm Birth Prevention Center in New York, “because in that period, women might not have access to a provider, and they will look up their symptoms online.”

Tsigas also took issue with sites, including MedlinePlus and (until this weekend) the Mayo Clinic, for using a variation of this language: “The only cure for preeclampsia is delivery of your baby.” This idea that the condition goes away after delivery is long-outdated, but—as ProPublica and NPR‘s reporting has shown—it continues to be all-too-prevalent among providers, including ER staff. The language may also reflect the concern among some medical professionals that if women don’t believe their condition is serious, they will resist delivering before their due date or by cesarean section—and put themselves and their babies at risk.

“There’s no question that delivery is often indicated, and sometimes quite urgently, to save the life of mother and/or baby,” Tsigas wrote. But, she added, “No provider should tell a patient that ‘the cure for preeclampsia is delivery.”’ Instead, she said, delivery should be seen as a “critical treatment” along with other measures, such as medication to reduce blood pressure and magnesium sulfate to prevent seizures and strokes. Describing delivery as a cure “lets everybody off the hook. Moms, their partners and even the providers all stop paying attention to mom’s health concerns after she delivers her baby…We need to continue to monitor mom until her blood pressure and other vital signs return to normal.”

The Mayo Clinic updated its language over the weekend, saying it had “self-identified the need to refine its preeclampsia content” before ProPublica reached out last Thursday. “All content is reviewed by Mayo Clinic’s subject matter experts for medical accuracy, relevance, and to ensure a Mayo Clinic-wide interpretation of the best-available evidence from sources such as US federal agencies and guidelines,” Dr. Sandhya Pruthi, the Mayo Clinic website’s chief medical editor, wrote to us on Friday. “All health information is reviewed on a scheduled, rolling basis, and any critical developments (e.g., FDA pulls drug from market) are processed swiftly to ensure that the content is accurate and relevant.”

Before and After: Old Mayo Clinic Language

Left untreated, preeclampsia can lead to serious — even fatal — complications for both you and your baby. If you have preeclampsia, the only cure is delivery of your baby.

The Mayo Clinic also updated its language to note that black women have a higher risk of developing the condition. Two other respected sites, of the Cleveland Clinic and MedlinePlus, continue to omit this important fact. That doesn’t surprise Monica McLemore, an assistant professor of nursing at the University of California-San Francisco who studies racial disparities in infant and maternal outcomes. “A lot of the sites are designed by people who don’t understand the importance of informing a variety of women about what their risks are,” she said.

Victoria Vinci, a Cleveland Clinic spokesperson, said its site would add the risk for black mothers in the next regular update. “Our standard for updating our page articles is every three to four years. This one is coming up on that mark.”

Incorrect information on MedlinePlus, which is published by the US National Library of Medicine, is especially problematic because it carries the government’s seal of approval. “Medline should be the gold standard,” McLemore said.

Yet the site’s main preeclampsia article “does not reflect the latest information,” Tsigas wrote. In addition to the already-noted problems, she cited the article’s suggestion that protein must be present in the urine for a preeclampsia diagnosis to be made. One of the mistakes providers often make is discounting spiking blood pressure and other symptoms because a protein test is inconclusive.

Nor, Tsigas said, is the information about treatment in line with current recommendations from the American College of Obstetricians and Gynecologists and other leading maternal health organizations. “The recommendations for bedrest and salt reduction aren’t really evidence-based,” Tsigas pointed out.

The only way to cure preeclampsia is to deliver the baby.

Most often, at 37 weeks, your baby is developed enough to be healthy outside the womb.

As a result your provider may want your baby to be delivered so the preeclampsia does not get worse. You may get medicines to help trigger labor, or you may need a C-section.

If your baby is not fully developed and you have mild preeclampsia, the disease can often be managed at home until your baby has matured. The provider will recommend:

Medline’s article comes from a company called ADAM, part of the Georgia-based health care services conglomerate Ebix Inc., which also provides content to other health sites. “You raise some important points, in particular about postpartum preeclampsia,” ADAM’s editorial director, Brenda Conaway, wrote in an email on Monday. “As it happens, this article”—last reviewed in May 2016—”is currently in review as part of our editorial review process. I will be talking with the senior medical editor and our medical director about the article today, and we will update it to reflect any needed changes.”

When reached by ProPublica, Harvard Health Publishing also agreed to make revisions. The problems with its preeclampsia write-up extend beyond the initial assertion that preeclampsia only occurs in pregnancy, Tsigas said. By focusing on eclampsia—seizures—as the main danger to mothers, it ignores the immediate risk of strokes caused by high blood pressure. Women with preeclampsia also have a much higher risk of heart attacks and strokes later in life.

The site’s chief medical editor, Dr. Howard LeWine, said the current language that the condition “occurs only during pregnancy” would be quickly revised. He said the wording is “technically correct”—preeclampsia only occurs in women who’ve recently been pregnant, and even postpartum preeclampsia is believed to originate during pregnancy. But, he acknowledged, “it gives the wrong impression. It’s misguiding people and will get changed.”