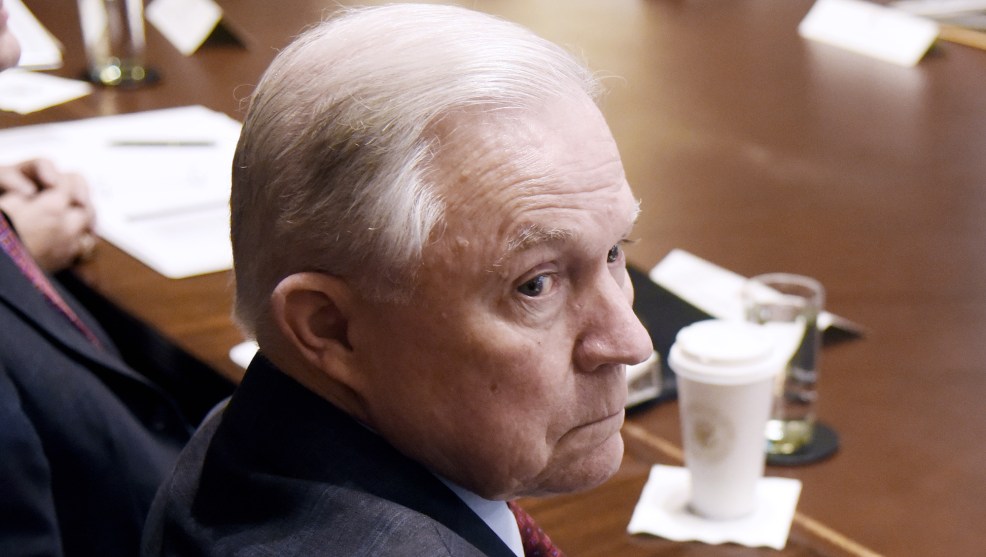 Attorney General Jeff Sessions summoned a group of his state-level counterparts to visit DC to discuss tech regulations on Tuesday. And while Sessions tried to push the group of attorneys general to join him in attacking tech companies for supposed political bias against conservatives, the state-level AGs brushed aside Sessions to instead focus on consumer privacy.

Officials from 13 states and the District of Columbia gathered at the Department of Justice Tuesday morning. Entering without an official public agenda, it was unclear what the meeting would actually be about. Just this past weekend, reports of a leaked memo suggested that the Trump administration might be gearing up to instruct the Department of Justice and other federal agencies to investigate online platforms like Facebook and Twitter for anti-trust violations. Speculation leading up to the meeting strongly suggested that the Department of Justice would hone in on the potential of anti-trust actions against big tech on the basis of conservative bias, accusations that have been a repeated refrain from Republican lawmakers and the president in recent weeks.

But, according to one attorney general at the meeting, it seemed like Sessions was the only person who wanted to talk about political bias, with the majority of the attorneys general instead deeming the path “too dangerous.”

“He repeatedly mentioned that concept of political bias without calling it that,” Maryland Attorney General Brian Frosh, one of the few Democrats in attendance, tells Mother Jones about Sessions opening remarks. “’There are forces that are surreptitiously using forces to influence public opinion,’ [Sessions] said, and I highly doubt he was referring to the Russians.”
According to Frosh, neither political bias nor the leaked executive memo were discussed after Sessions’ opening remarks. When Frosh asked directly about the memo and whether or not the administration had proof of political bias, he says Department of Justice officials evaded his question. According to Frosh, when Nebraska Attorney General Doug Peterson suggested the conversation focus on issues with more agreement, including consumer privacy, Sessions retorted, “What are we supposed to do about it, just ignore it?”

California Attorney General Xavier Becerra, another Democrat in attendance, categorized the meeting as a”bipartisan and an open discussion,” namely focused on how state and federal law enforcement can work together to improve consumer privacy.

As for the question of anti-trust issues, attorneys general in attendance didn’t rule out the possibility as one of many avenues of creating better legal accountability for an increasingly powerful tech industry. Becerra told reporters that several former anti-trust cases were discussed, comparing tech to “Big Oil.” But given the rapid rate of development for the tech sector and its unique characteristics, it was impossible to draw a direct example. “This is not Standard Oil. This not even Microsoft,” said Becerra. “But those cases inform the conversation.”

The Department of Justice did not respond for a request for comment from Mother Jones.

Many of the attorneys general on the guest list have publicly been much more bullish on calling out tech companies as possible monopolies. Missouri’s Jeff Hawley has already said his office is launching an anti-trust investigation into Google. Louisiana Attorney General Jeff Landry, who called in via phone, also mentioned potential anti-trust action during Tuesday’s meeting.

The meeting comes at a crucial time when federal lawmakers are playing catch up to efforts being made at the state level to enshrine consumer privacy. In June, California passed data privacy legislation which gives consumers basic rights, including the ability to opt-out from companies selling their data to third parties and the right to know what data about them is being collected. Conversations on the federal level, on the other hand, have moved more slowly since the wake of  hearings brought on by Cambridge Analytica.

But that might be changing. On Tuesday, the US Department of Commerce’s National Telecommunications and Information Administration (NTIA) opened up a request for comment from the public on how to approach to consumer data privacy. On Wednesday AT&T, Google, and Twitter will testify before the Senate Committee on Commerce, Science, and Transportation for a discussion on consumer data privacy and how to more effectively safeguard the data of Americans.

Both Becerra and Frosh told Mother Jones that there was mention of further discussion on the matter, potentially at the next National Association of Attorney General meeting, which will take place in November. But that there was no agreement on one clear path forward in regulating tech companies.

“I think the key takeaway is the Justice Department, at least, is still thinking about changing what is written or spoken on social media platforms and make it more to their liking,” says Frosh. “That’s very dangerous to free speech.”