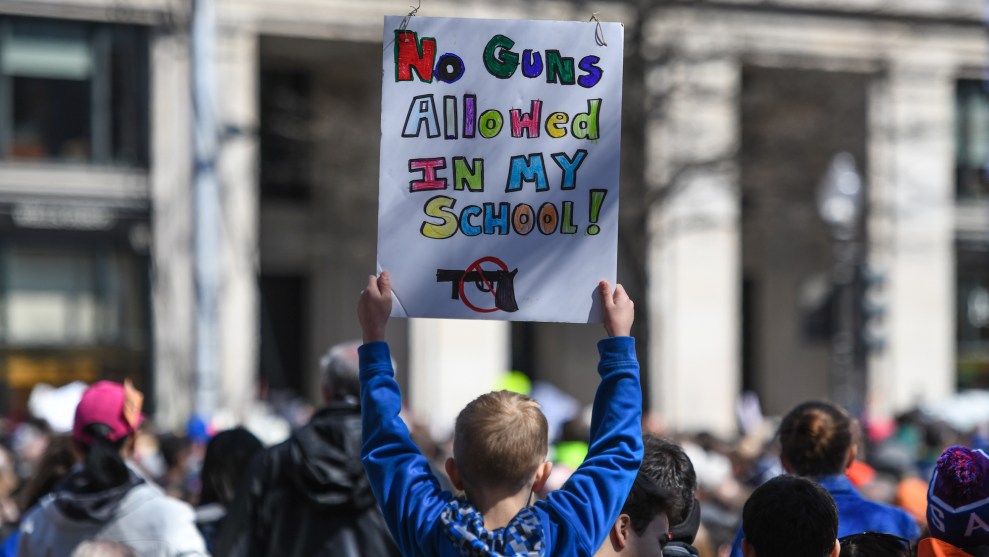 A young man holds a sign during the March for Our Lives protest in Washington, DC.Cal Sport Media/AP

The disturbing number of high-profile mass school shootings have forged an alliance between the gun safety movement and education advocates. Their partnership has been reinforced by the actions of the Trump administration in the aftermath of the February school shooting in Parkland, Florida, when it emphasized the importance of school safety measures instead of gun control.

Just weeks before the midterm elections, two prominent national organizations have come together to learn whether voters agree with the president’s approach. Today, they release a survey suggesting that in House battleground districts, they do not.

The survey, conducted by Public Policy Polling, a Democratic polling firm, was a joint venture between the Brady Campaign to Prevent Gun Violence, a national gun safety advocacy organization, and the American Federation of Teachers (AFT), one of the largest teachers unions in the country. The two have worked together on matters of gun violence and school safety since the 2012 Sandy Hook Elementary School massacre. Recently, they’ve been particularly concerned about the findings of Education Secretary Betsy DeVos’ commission on school safety—especially in light of reports DeVos is examining whether to use federal funds to arm teachers.

“One takeaway is the public is starting to move away from thinking about gun violence as a partisan issue.”

“We were interested in learning how folks on the ground felt about the efforts the [Trump] administration were working toward as opposed to the ones we’ve proposed,” says Kris Brown, Brady’s co-president. Brady, like the March For Our Lives student activists, advocates background checks for all gun sales, laws that keep guns out of the hands of those who pose a risk to themselves or others, and a ban on assault weapons and high-capacity magazines.

The poll surveyed voters in 11 House districts in California, Colorado, New Jersey, New York, Texas, and Virginia, where President Donald Trump’s approval rating trends slightly above the national average. In each of these districts, a pro-gun control Democrat is trying to unseat a Republican incumbent who supports gun rights.

Consistent with other recent polling on this issue, it found that roughly 90 percent of voters support requiring background checks for every gun sale, more than half support a ban on assault weapons and high-capacity magazines, and about three-quarters support “red flag” laws that would keep guns out of the hands of those who pose a risk to themselves or others. Those surveyed also expressed interest in seeing federal school funding spent on mental health programs and violence prevention services over arming teachers.

The survey suggests voters’ support doesn’t just end at policy, but extends to the ballot box. The results suggest voters would be more likely to support a candidate who advocates for those policies over one who does not. That support generally held across those who owned guns and those who did not; gun owners’ support dipped slightly for each measure. For example, while 51 to 71 percent of all voters surveyed say they support a ban on assault weapons and high-capacity magazines, only 51 to 66 percent of gun owners agreed.

Gun safety organizations have been particularly focused on the House during the midterm elections, in hopes of returning control of that body to Democrats who have expressed a greater willingness to take up gun safety measures. Brown and Weingarten say their teams plan to share the survey data with the candidates running in the districts surveyed.

“After Parkland, it’s important to get the sense of where people are in battlegrounds, because they are bellwether,” says AFT president Randi Weingarten. “The polls are an important education tool for those who are running for office. It shows them that regular folks, including gun owners, don’t want them to shy away from these issues.”