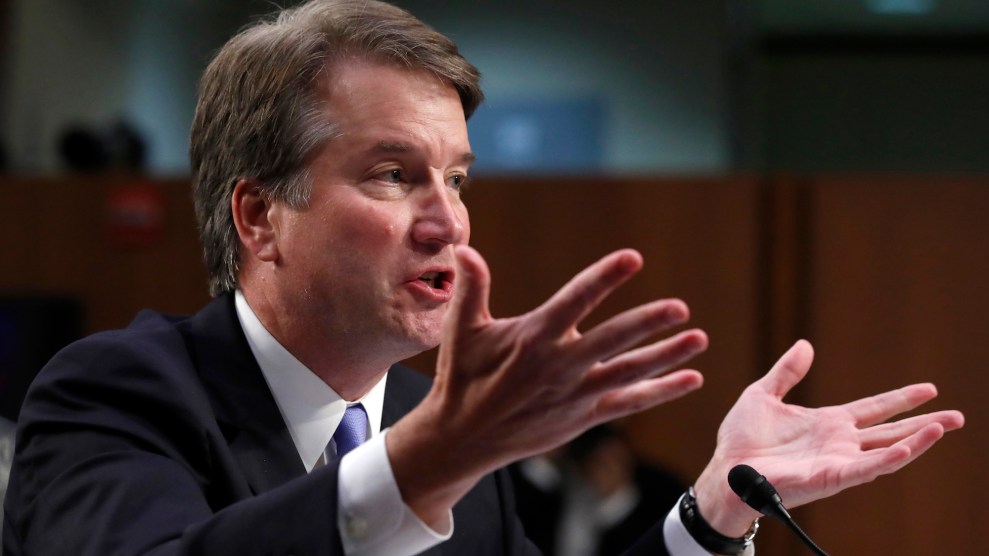 Over the past several months, Supreme Court nominee Brett Kavanaugh has told us a lot about himself: that he was a virgin in high school, that he has bought tickets to every home playoff game of the Washington Nationals baseball team, and even that he had his first date with his wife on September 10, 2001, the night before the attacks on the Pentagon and the World Trade Center. What he still hasn’t told us is how he pays his bills.

In the wake of the far more serious sexual assault allegations against him, his personal finance deficiencies might seem less important today than they did a month ago. But the way Kavanaugh has handled questions about these financial issues reflect a pattern that’s also evident in his responses to allegations he was a heavy drinker in his youth and sexually assaulted young women. He’s both defensive and evasive, even when it’s possible that admitting the truth would help him. And he’s been helped by a little-known loophole in federal disclosure rules that has the potential to create a host of conflicts of interest.

When President Donald Trump nominated him to the Supreme Court in July, Kavanaugh arrived with one of the most unusual financial profiles of any recent Supreme Court nominee. At the end of 2016, he had mountains of debt that vanished ahead of his nomination. Not long before he landed on the DC Circuit Court of Appeals in 2006, he bought a starter home for $1.225 million despite having few liquid assets. And even though he had heavy credit card and other debt and not much cash in the bank, in 2016, Kavanaugh somehow came up with the $92,000 initiation fee to join the Chevy Chase Club, an exclusive private country club in Maryland that also charges $9,000 in annual dues.

Kavanaugh’s finances have spurred lots of internet chatter as to whether the judge has a sugar daddy or a Koch-type conservative donor keeping him afloat. The White House’s early explanation—that Kavanaugh ran up the credit card debt buying season tickets to Washington Nationals games for friends, who repaid him—only seemed to spur the conspiracy talk. The speculation got so bad that in written follow-up questions after the confirmation hearing, Sen. Sheldon Whitehouse (D-R.I.) went so far as to ask Kavanaugh whether he had a gambling addiction.

Kavanaugh easily could have put these rumors to rest had he answered some of the questions directly and truthfully. It seems very likely the explanation is a simple one: He gets money from his family. Sponging off relatives to support a luxurious lifestyle on a government salary isn’t a crime, but Kavanaugh seems doggedly unwilling to own up to it.

And legally, he doesn’t have to. That’s because Kavanaugh appears to be hiding behind a loophole in federal rules that exempts loans and gifts from family members from disclosure. Federal judges are generally required to report all major gifts they’ve received. But the list of people who qualify as exempted family members is long:

That loophole seems to have the potential to create conflicts of interest, in which relatives who have an interest in a case can give money to the judge hearing it—money that would never have to be publicly disclosed.

Sponging off relatives to support a luxurious lifestyle isn’t a crime, but Kavanaugh seems unwilling to own up to it. And legally, he doesn’t have to.

Charles Geyh, a judicial ethics expert and law professor at Indiana University-Bloomington, says the loophole isn’t as big a problem as it might seem. The judicial code of ethics requires federal judges to recuse themselves from cases involving family members. “If you are receiving gifts from people where you’d have to disqualify yourself anyway, it’s less of a concern,” Geyh says. “The only issue is whether a judge can somehow manage to evade disqualification by nondisclosure on the forms and then hope no one notices [if he handles a case involving family members]. That sort of conduct is so extreme as to be impeachable.” Cases like that are rare, but Geyh recognizes there’s a legitimate question of whether the disclosure rules ought to be expanded to include some familial relationships, perhaps with a dollar threshold so at least large transactions would have to be reported.

Even so, it’s not hard to imagine a situation in which family money might influence a case where the relative isn’t directly involved. For instance, Kavanaugh’s father was a lobbyist for the cosmetics industry. Say the industry sued the Food and Drug Administration, which regulates its products. If the case came before Kavanaugh, he would have to recuse himself if his father was a party—but not necessarily from a case involving the industry he represented, even if his dad had given him hundreds of thousands of dollars that essentially came from the same industry before him in court.

Some intrafamily transactions do have to be disclosed. For instance, if family members had given Kavanaugh stocks or other securities, he would have had to report those holdings. In 2012, Justice Samuel Alito reported a big influx of stock he and his wife received when his father-in-law died. Justice Elena Kagan reported receiving securities as part of an inheritance during the year she served as solicitor general. Both explained the influx of assets in their disclosure forms. But cash from Mom or Dad doesn’t have to be disclosed, and while he seems unwilling to simply come out and say it, it seems clear Kavanaugh has received quite a bit of money from his family over the years.

There’s money to be had: Kavanaugh grew up the only child of a lobbyist and a Maryland state court judge. He lived in Bethesda, Maryland, a wealthy suburb of DC, and went to an exclusive private Catholic school, Georgetown Prep, before heading off to Yale College and, later, Yale Law School. His father, Ed Kavanaugh, golfed with House Speaker Tip O’Neill, and the year before he retired took in $13 million in compensation from his lobbying post. (Kavanaugh’s wife, Ashley Estes Kavanaugh, seems to come from more modest means. Her dad is a dentist in Abilene, Texas, and she attended a public high school and a state university.)

It appears Kavanaugh has continued to benefit from his family’s good fortune well into adulthood. Consider the house he bought in 2006—his first—in Chevy Chase, Maryland, another wealthy suburb just north of DC. He paid $1.225 million for the starter home he has suggested was a fixer-upper. At the time, Kavanaugh was still working in the George W. Bush White House as the president’s staff secretary, and Ashley was the president’s personal assistant. They had a combined income of about $237,000. Public land records indicate he and his wife put down $245,000 in cash and took out a $980,000 mortgage.

The transaction raised red flags for many members of the Senate Judiciary Committee, because despite their healthy incomes, the Kavanaughs had reported only $10,000 in the bank in 2005, plus about $90,000 in retirement funds and $25,000 in credit card debt. In addition, Kavanaugh’s reported bank balances didn’t go down after the house purchase. Clearly the couple didn’t dig $245,000 out of the couch, so in follow-up questions after the first round of Kavanaugh’s confirmation hearing, Whitehouse asked him where he got the cash. It was a simple question, but Kavanaugh didn’t answer it directly.

Instead, he referred to a lengthy statement he provided in response to an earlier question from Whitehouse that broadly addressed his overall financial picture. In that response, he said he was able to take out a loan against his retirement account to help with the down payment. According to his disclosure forms, that loan was not more than $50,000, a far cry from the $245,000 he put down for the house. But he also wrote, “We have not received financial gifts other than from our family which are excluded from disclosure in judicial financial disclosure reports…On the 2018 financial disclosure report, I correctly listed ‘exempt’ for gifts and reimbursements because those are the explicit instructions in the 2018 Filing Instructions for Judicial Officers and Employees.”

He referred to the same response in other written questions about his disappearing credit card debt, only writing, “Please see my response to Question 11.”

Kavanaugh noted the only reason he was disclosing his liabilities was to prevent future conflicts of interest. He wrote, “It bears repeating that financial disclosure reports are not meant to provide one’s overall net worth or overall financial situation. They are meant to identify conflicts of interest. Therefore, they are not good tools for assessing one’s net worth or financial situation.”

He’s right. There’s no obligation for him to open his books to the public, but the public might have a lot more confidence in the integrity of the courts if he, and other judges, did it anyway. At least Americans could reasonably be assured he didn’t have a gambling problem.