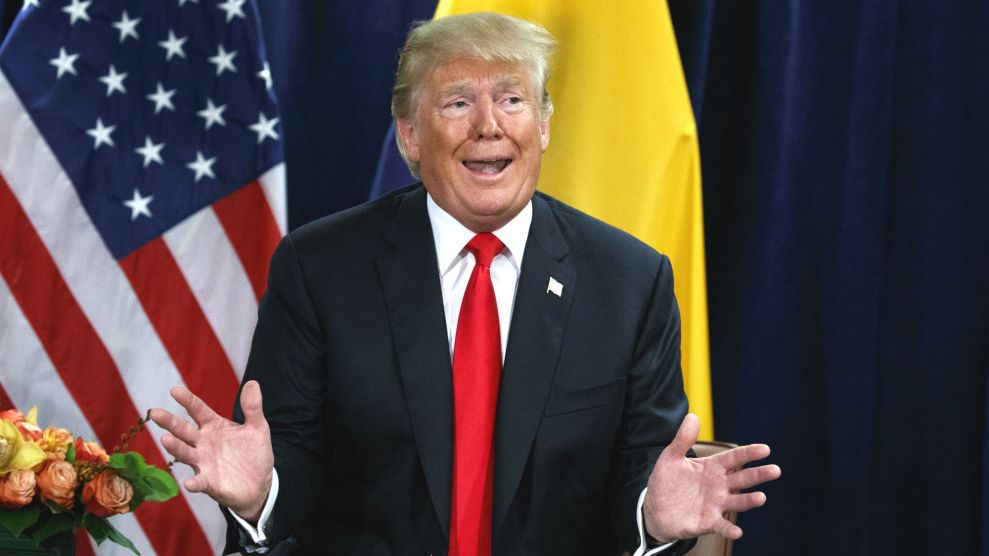 On Tuesday, President Donald Trump addressed the allegations against Supreme Court nominee Brett Kavanaugh at the United Nations while taking questions from reporters.

When asked if Kavanaugh’s second accuser—Deborah Ramirez, who alleges Kavanaugh exposed himself to her in college—should be allowed to testify, Trump failed to answer the question, but did attack Ramirez. The president said that she “admits she was drunk,” and asked if the allegations are going to take “one of the most talented intellects from a judicial standpoint” off the Supreme Court.

Here is the full transcript, as recorded by the White House press pool:

I think he is just a wonderful human being. I think it is horrible what the Democrats have done. It is a con game, they are really con artists. They are trying to convince they don’t bite, they don’t believe it themselves. They know he is a high quality person, they don’t believe it, it is just resist and obstruct. They are playing a con game, and they are playing it very well, much better than Republicans. They are lousy politicians, they have lousy policy, they don’t know what the hell they are doing. They want to get rid of ICE, they want to get rid of law enforcement, they don’t want to take care of our military, they want to raise your taxes, but they are good at one thing. That is obstruction and con [Trumps voice starts to sound angry here]. He is one of the highest quality people. He said when he was focused on being No. 1 in his class at Yale, to me, that was so believable. I understand college very well, being number 1 in your class, I understand a lot of things. When he said that, I understood exactly. He was so truthful. But for the Democrats to be trying to make him into something lets be nice about it: Something he is not.This isn’t his footing, he’s never been here before. He’s never had any charges like this, charges come up from 36 years ago that are totally unsubstantiated. I mean, you, as a president of a great country, Columbia, I mean how is this possible 36 years ago?…and now a new charge comes up and she says it may not be him and there are gaps. And she was totally inebriated and all messed up, and she doesn’t know. It might have been him, or it might have been him. Gee, lets not make him a Supreme Court judge. This is a con game being played by the Democrats these are the same lawyers who have been fighting for years it is a shame you can do this to a persons life. Ill tell you: Maybe even more important. Who is going to want to go before the system to be a Supreme Court judge or even a politician? I can tell you that false accusations of all type are made against a lot of people. This is a high quality person, and it would be a horrible insult to our country if this doesn’t happen. And it’ll be a horrible, horrible thing for future political people. It cannot be allowed to happen. And the Democrats are playing a con game, C-O-N.

Q: Should the second accuser be allowed to testify?

Trump: The second accuser doesn’t even know, she thinks maybe it could have been him, maybe not. Admits she was drunk. She admits time lapses, this is a person, and this is a series of statements that is going to take one of the most talented intellects from a judicial standpoint in our country keep him off the U.S. Supreme Court? He has the chance to be one of the greatest justices in the United States Supreme Court. What a shame. His wife is devastated, his children are devastated. I don’t mean, Oh gee, I am a little unhappy. They are devastated. And it is because of these Democrats.