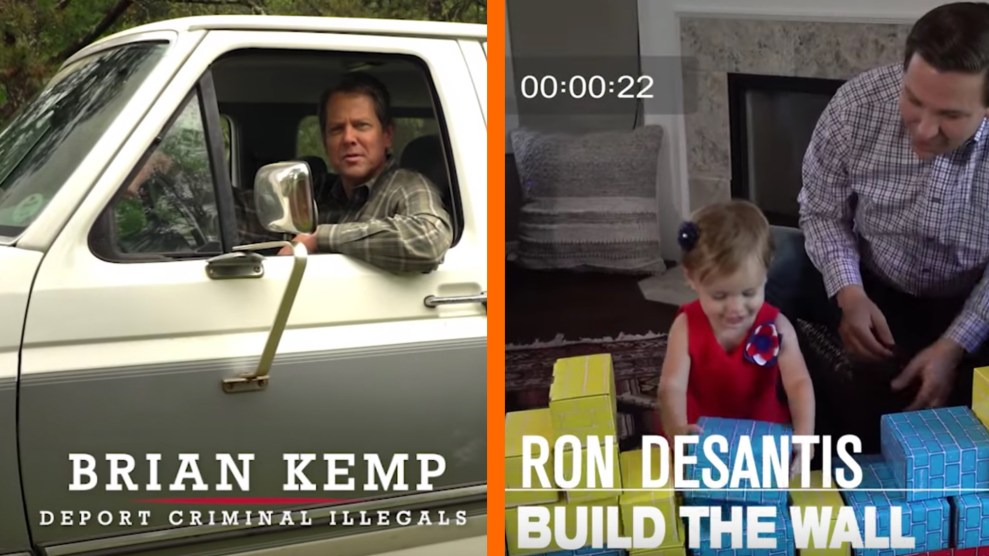 Ever since President Donald Trump rode to victory on an anti-immigration platform, Republican politicians around the country have been quick to adopt his talking points. This year, GOP campaigns are spending heavily on ads that feature pledges to build the border wall, end sanctuary cities, and help the president secure the border. But a handful of candidates have distinguished themselves by the lengths they’ve gone to show their anti-immigrant credentials:

Brian Kemp: Kemp, Georgia’s secretary of state, became the Republican nominee for governor after winning a primary in which candidates competed to see who could be the most anti-immigrant. In an ad, the self-described “politically incorrect conservative” suggested he would abduct undocumented immigrants and deport them himself. “I got a big truck,” Kemp said, sitting in his truck. “Just in case I need to round up criminal illegals and take ’em home myself. Yep, I just said that.” He’s also promised to “track and immediately deport all criminal aliens so our kids don’t become the next victims.” In September, his campaign sent out mailers that falsely claimed his opponent, Democrat Stacey Abrams, wanted to “allow illegal immigrants to vote.”

Corey Stewart: The Republican running against Virginia Sen. Tim Kaine may be this year’s most infamous Senate candidate, known for his far-right views and embrace of Confederate monuments. On his campaign website, he boasts that as chairman of the Prince William County Board of Supervisors, he “led the nation’s toughest crackdown on illegal immigration,” referring to a measure he championed that denied public services to undocumented immigrants and instructed police to check the immigration status of people they arrested. Recently, Stewart faced off against immigration activists at a “Support ICE” rally he held in front of the Immigration and Customs Enforcement building in Fairfax, Virginia. “The time has come to end the scourge of illegal aliens who are preying on law-abiding United States citizens,” Stewart said at the rally. He is nearly 20 points behind his opponent in the polls.

Rep. Steve King: King, an eight-term Iowa congressman, is unlikely to lose his reelection bid. His reputation for racist anti-immigrant rhetoric is well known: He infamously claimed that Dreamers have “calves the size of cantaloupes,” supposedly because of drug smuggling; he’s also compared immigrants to dogs and said that illegal immigration is causing a “slow-motion holocaust.” Long before Trump talked of building a wall, King was pushing a plan to build an electrified wall on the US-Mexico border. On Twitter, he’s made comments like “Cultural suicide by demographic transformation must end.”

Rep. Paul Gosar: This Arizona congressman once suggested that lawyers who help undocumented immigrants should be prosecuted. Earlier this year, he called on Capitol Police to arrest undocumented immigrants attending the president’s State of the Union address. His extreme views have even alienated him from his own family: Six of Gosar’s siblings recently endorsed his opponent, David Brill, in a series of ads in which they criticize his stance on immigration and other topics. “It would be difficult to see my brother as anything but a racist,” his sister Grace Gosar says in one clip. FiveThirtyEight gives Gosar a 99.7 percent chance of keeping the seat he’s held since 2011.

Rep. Lou Barletta: Barletta, a Republican congressman running against Democratic Pennsylvania Sen. Bob Casey, has been an immigration hardliner since his time as mayor of a town he vowed to make “the toughest place on illegal immigrants in America.” Barletta supported a 2006 ordinance that penalized landlords who rented to undocumented immigrants and businesses who hired them, while also making English the city’s official language. (The ordinance was struck down in court.) In a February campaign mailer, Barletta wrote that “America is at war” with undocumented immigrants and falsely claimed that “with every day that passes, more Americans are killed or victimized” by “violent criminal aliens” and “radical terrorists.” Casey is currently up by an average of 16 points in the polls.

Rep. Tom McClintock: At the height of the family separation crisis in June, the congressman from California’s 4th District blamed migrant families for the unpopular policy. “Family separation is not the president’s fault for arresting and prosecuting lawbreakers,” McClintock said in a statement. “It is the lawbreakers’ fault for breaking the laws in the first place.” He’s the only California lawmaker to earn an A+ grade from the hardline anti-immigration group NumbersUSA. Though Democrats are trying hard to flip the seat, challenger Jessica Morse is in a tough race against the five-term incumbent.

Ron DeSantis: The conservative former congressman has closely allied himself with the president ever since he entered the Florida governor’s race, echoing Trump’s stance on ending the diversity visa lottery and “chain migration.” He’s also railed against sanctuary cities, saying he’ll remove “any official engaging in that sanctuary behavior” if he’s allowed to. DeSantis’ most memorable moment was in a campaign ad in which he teaches his toddler to “build the wall” using blocks. DeSantis is currently neck and neck with Democrat Andrew Gillum.

Steve Gaynor: Gaynor, a candidate for secretary of state in Arizona, has said the state shouldn’t have to print Spanish-language ballots and has argued for repealing the Voting Rights Act requirement that most counties in the state do so. He beat incumbent Michele Reagan in August’s primary, a month after his campaign sent out a robocall falsely claiming that she was “allowing illegal immigrants to vote in federal elections.” (The call came after Reagan settled a lawsuit that had challenged some of the state’s obstacles to voter registration.) A recent poll shows Gaynor leading the Democratic candidate, Katie Hobbs.

Kris Kobach: Before he became Kansas’ secretary of state, the Republican gubernatorial candidate built his career on helping states write anti-immigration laws. One of his most high-profile achievements was helping to draft a controversial Arizona law that would have required police to ask people they suspected of being undocumented about their immigration status and allowed cops to arrest people for immigration violations without a warrant. (The Supreme Court gutted the law before it could take effect.) More recently, Kobach has made voter suppression his signature issue: He was the architect of a Kansas law that required proof of citizenship for voter registration. That law was also struck down in federal court. Fresh off his tenure as vice chairman of Trump’s now-disbanded voter fraud commission, Kobach is trying to beat Democrat Laura Kelly in a very close race.

Ken Paxton: The Texas attorney general made his name by suing to end two Obama-era programs to protect undocumented immigrants. In 2015, he successfully led a challenge to Deferred Action for Parents of Americans Lawful Permanent Residents (DAPA), a program that protected certain undocumented parents from deportation and allowed them to get work permits. This year, he’s spearheading an effort from a group of conservative states to end the Deferred Action for Childhood Arrivals program, too. Paxton, who was indicted for fraud in 2015 but hasn’t gone to trial yet, is facing a challenge from Democrat Justin Nelson.

Rep. Dana Rohrabacher: After three decades in office, the California congressman is facing a tough reelection battle against Democrat Harley Rouda. In April, Rohrabacher baselessly linked a shooting at YouTube’s headquarters to “the sanctuary state movement.” Before any information about the suspect had been released, Rohrabacher suggested the shooter could be an undocumented immigrant and cited the shooting as an opportunity to “emphasize that any illegal in this state should be sent back whether he’s a criminal or not.” More recently, Rohrabacher has offered to personally fund a lawsuit against California’s “sanctuary state” law.

* This story has been revised for clarity.