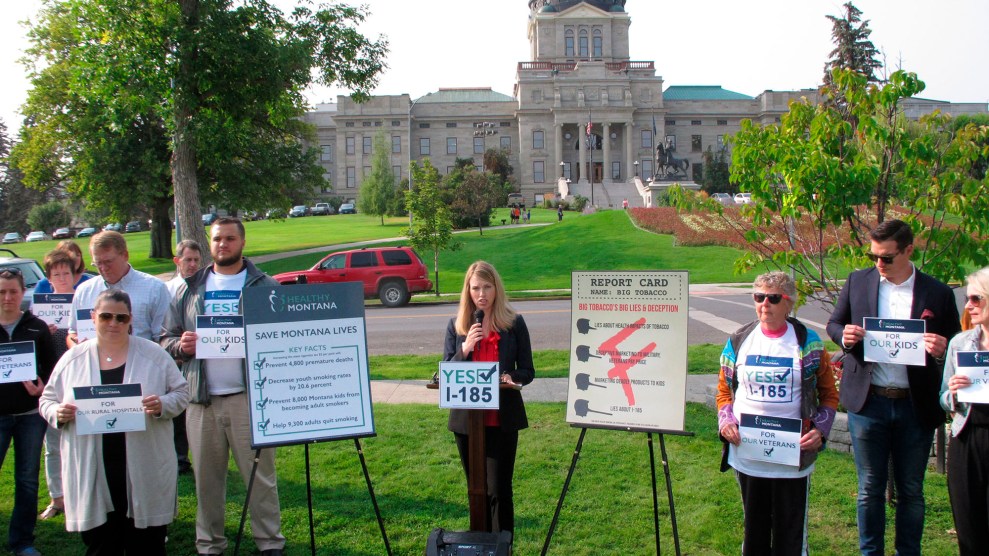 A rally in August at the Montana state capitol for a ballot initiative to raise the state's tobacco taxes in August.Matt Volz/AP

Tobacco companies are continuing to pour money into a state ballot fight in Montana, waging a campaign that could result in near 100,000 people—about 10 percent off the entire state—losing their health insurance.

A new set of filings in the state’s campaign finance database show that tobacco companies Altria (the parent company of Phillip Morris in the US) has now contributed more than $17.1 million to Montanans Against Tax Hikes, the group opposed to ballot question I-185. The measure would raise taxes on cigarettes in order to fund the continued operation of the state’s Medicaid expansion program. RAI Services (the parent company of RJ Reynolds) has also contributed $295,000 to campaign.

The Medicaid expansion program—the provision of Obamacare that offers health insurance to everyone who makes up to 138 percent of the poverty level—has enrolled nearly 100,000 people in Montana since the state started participating in it in 2015. But the state legislature added a time bomb to the law that implemented Medicaid expansion: It would sunset in June 2019 unless further action was taken to establish a dedicated funding source for the program.

Health advocacy groups in the state decided to fund Medicaid expansion with an increase to the state’s cigarette tax, a win-win in the eyes of public health experts. That’s caused Altria to invest heavily in the state. As I explained last week:

The state’s tobacco taxes have remained flat since 2004, when a ballot initiative increased them by $1 per pack of cigarettes. That initiative passed by a 26-point margin. Health groups in the state tried to raise those taxes again in recent years, but were stymied in the state Legislature. “The tobacco lobby is incredibly influential in our legislature,” says Kristin Page-Nei, Montana government relations director at the American Cancer Society Cancer Action Network, one of the groups behind the initiative. After those efforts failed, the groups decided on another ballot measure. The effort is primarily funded by the Montana Hospital Association, but it has also received a boost in signature collection from the Fairness Project, a national organization that has spearheaded the recent nationwide push to get Medicaid expansion on the ballot. The Fairness Project has spent about $130,000 in the state.

“We pay billions of dollars every year to treat illnesses caused by Big Tobacco,” says Jonathan Schleifer, executive director of the Fairness Project. “And so this initiative asks the multinational corporations that get rich off those illnesses to give a little back into the system, and frankly, they just don’t want to pay their fair share.”

Altria’s $17 million investment is massive for the state. In this year’s US Senate campaign, which the Cook Political Report lists as a toss-up, incumbent Democratic Sen. Jon Tester has raised $17.8 million, while his Republican challenger has raised just $3.8 million.