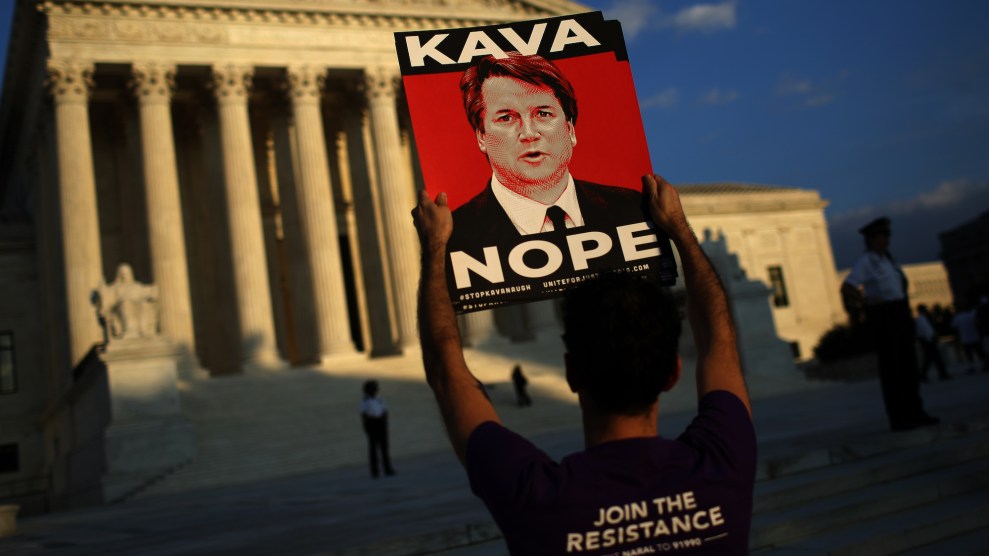 With Supreme Court nominee Brett Kavanaugh likely to be confirmed this weekend, Democrats have raised the possibility that they will try to impeach him if they retake the House in November. At least 17 members of the House Judiciary Committee have said they’re on board with an investigation into whether Kavanaugh lied to Congress during his confirmation hearing testimony. “Someone committed perjury under oath in the Senate Judiciary Committee, and I think it was Judge Kavanaugh, and therefore, he should be prosecuted to the full extent of the law and should not serve as a judge on any court,” Rep. Luis Gutiérrez (D-Ill.) told HuffPost last week. Rep. Jerrold Nadler (D-N.Y.), who would likely become the chair of the House Judiciary Committee if Democrats win back enough seats next month, told ABC’s George Stephanopoulos on Sunday, “We would have to investigate any credible allegations of perjury and other things that haven’t been properly looked into before.”

Democrats may be furious about the confirmation process, bitter about Merrick Garland, and justifiably upset about Senate Republicans’ treatment of women who accused Kavanaugh of sexual assault. But turning Kavanaugh into the Democrats’ Benghazi would not only be bad for the court; it would be bad for the country. Here’s why.

Impeachment is a liberal fantasy like DC statehood or nuclear disarmament. It’s never going to happen. If the Democrats can’t stop Kavanaugh’s confirmation in the Senate, there’s no way they’re going to be able to boot him from the bench after he’s secured his lifetime appointment. No Supreme Court justice has ever been successfully impeached and removed by Congress. The last time Congress even tried was in 1804. The bar for impeachment and removal is much higher than the bar to prevent a justice’s confirmation. It takes a majority House vote on articles of impeachment, then a two-thirds majority in the Senate to convict. Republicans are likely to hold the Senate in this year’s midterms, making a Kavanaugh conviction all but impossible. Even if Democrats manage to win the Senate, they won’t come anywhere near the two-thirds majority needed to toss Kavanaugh overboard. (The Senate’s two-per-state setup is effectively rigged against Democrats, who won the popular vote in the 2016 presidential election but carried only 20 states, the equivalent of 40 senators out of 100.)

That means any impeachment proceedings would be essentially a show trial. But even a failed impeachment effort would be a hugely divisive event. Imagine what it would look like. Hours of testimony from Squi, Timmy, and PJ over whether a Devil’s Triangle is really, as Kavanaugh testified, a drinking game. Expert debates over the definition of “boofing.” Microscopic scrutiny of Zillow floor plans of Mark Judge’s grandma’s house, where some internet sleuths think the alleged attack on Christine Blasey Ford might have taken place. Michael Avenatti could figure prominently. It’s the kind of stuff that could end up making former House Oversight Committee chairman and Benghazi conspiracy theorist Rep. Jason Chaffetz (R-Utah) look like an elder statesman.

Sen. Patrick Leahy (D-Vt.) might get his wish to see former GOP operative Manny Miranda hauled in front of a congressional panel to account for the documents he stole from Senate Democrats in 2004 and allegedly gave to Kavanaugh when he worked in the Bush White House. Democrats could spend months relitigating that episode alone. But does anyone believe the American public really yearns for more of Squi and Timmy or Manny? Most of these issues have already been raised, however imperfectly, in the appropriate forum: Kavanaugh’s confirmation hearing. Beating this dead horse is not likely to tell us anything we don’t already know, save Roe v. Wade, or knock Kavanaugh off the bench.

If the Democrats retake the House in November, there is much genuine oversight work to be done. There are the big things: Russian meddling in US elections, the president’s business dealings and tax returns, the corruption presided over by Scott Pruitt at the Environmental Protection Agency. But there’s plenty of smaller stuff, too, that affects millions of Americans. High-level posts at the Department of Housing and Urban Development are being filled by the likes of a wedding planner and an HVAC salesman. The man in charge of fighting racial discrimination in lending at the Consumer Financial Protection Bureau is the author of racist blog posts. There’s a fake jihadi implementing Trump’s executive orders at the Department of Homeland Security. A man who worked for disgraced lobbyist Jack Abramoff promoting a sweatshop economy is now in charge of worker protections at the Labor Department.

The list of potential investigations of the Trump administration is long and growing. Perhaps more important, though, a pointless impeachment proceeding would continue to overshadow what may be a far bigger threat to judicial balance than Kavanaugh: Trump’s stacking of the lower federal courts. The Supreme Court decides only about 80 cases a year, a small fraction of the workload handled by federal courts. Yet since July, the Kavanaugh fight has all but eclipsed attention to the Senate’s quiet confirmation of two dozen Trump judicial nominees, including one, Charles Goodwin of Oklahoma, deemed unqualified by the American Bar Association. Trump also will get to fill the vacancy Kavanaugh will leave on the powerful DC Circuit Court of Appeals, a court that hears virtually every challenge to environmental, health, safety, and worker-protection regulations.

And with more than two years left in Trump’s first term, there’s plenty of time for him to appoint at least one more Supreme Court justice. Rumors have been rampant for a while now that Justice Clarence Thomas is going to retire next year. Ruth Bader Ginsburg, a two-time cancer survivor, is 85. Stephen Breyer, another liberal justice, is 80. Replacing Ginsburg or Breyer with someone from Trump’s Federalist Society-drafted shortlist would swing the court even farther to the right than currently imaginable. Given those dynamics, if they want to influence the Supreme Court, Democrats should focus on winning elections, and it’s not clear that trying to impeach Kavanaugh would help much in that regard. Polls suggest that the messy attempts to block his confirmation may already be galvanizing the Republican base heading into the midterm elections and strengthening the GOP’s odds of holding the Senate.

Investigating Kavanaugh after he’s been confirmed would also set a terrible political precedent that threatens the very core of the Constitution’s separation of powers. After all, why stop with Kavanaugh? Why not just go ahead and try to impeach Thomas? There’s a compelling case to be made that he also lied under oath and that he’s continued to harass women even after joining the court. (At least one congressional candidate this year has campaigned on a Thomas impeachment.) And Republicans can play that game, too, as they’ve shown. If they retain or retake the majority, why not go after Ginsburg for bashing Trump? For that matter, why not try a Franklin D. Roosevelt-inspired court-packing scheme to add more justices to the court and dilute the conservative majority, as some liberals have proposed?

Those politically motivated stunts, like impeaching Kavanaugh, would likely fail. But impeachment proceedings would also be highly disruptive to the work of the court and could set up a constitutional crisis. As with any Kavanaugh impeachment attempt, there would be fights over subpoenas and whether a justice could be compelled to testify before Congress. The court itself might have to draw the battle lines: The law over judicial impeachment is not especially settled when it comes to how far Congress can go in meddling in the affairs of the high court. This is not a road anyone who cares about the independent functioning of the judiciary should want to go down.

For all the frothing they’re doing now, Democrats’ enthusiasm for a Kavanaugh impeachment proceeding may wane quickly after the election anyway. That’s what happened with Thomas. There were a few threats of a continued investigation of Thomas after his controversial confirmation fight, including one into the leak of Anita Hill’s name to the press. The Senate special counsel spent five months and millions of dollars trying to determine the source of the leak but eventually gave up, and that was the end of any official investigation. Republicans and Democrats alike were eager to move on from that debacle, as they likely will be once Kavanaugh is confirmed.

Among those who seem to understand the potential dangers of an impeachment investigation is Rep. Nancy Pelosi (D-Calif.), the liberal icon who may be poised to return as House speaker if the Democrats do well in November. On Tuesday, when she appeared at the Atlantic Festival, Pelosi was asked about threats to impeach Kavanaugh. “That would not be my plan,” she said. “We are not about impeachment. [Democrats are] not about dividing the country. We’re about ‘E pluribus unum.'”