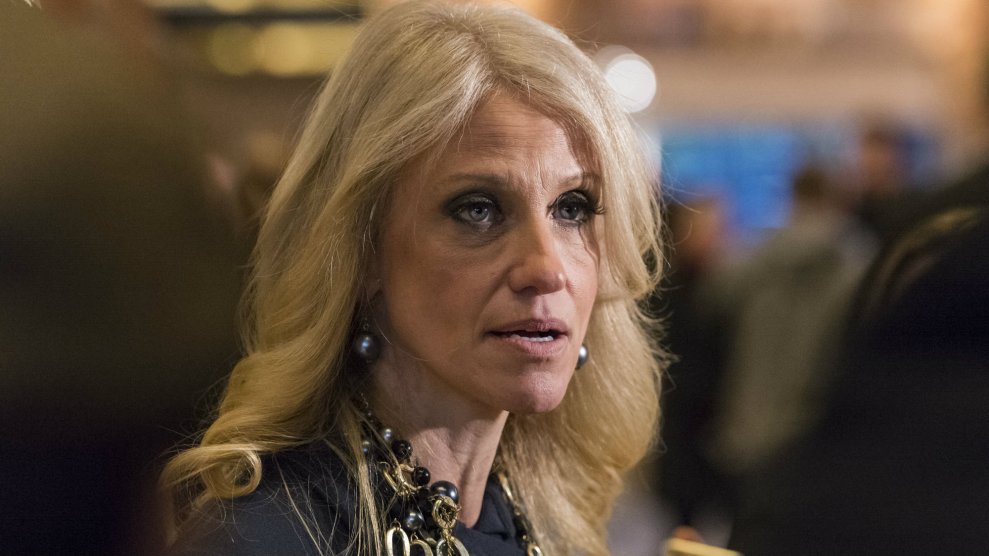 After a gunman opened fire at the Tree of Life synagogue in Pittsburgh, Pennsylvania, killing 11 people and telling law enforcement officials that “all Jews must die,” much of the national discussion has been about the rise in anti-Semitic hate crimes since the election of Donald Trump. But on Monday morning, White House Counsel Kellyanne Conway shared a different theory about the nature and causes of the rampage that left an elderly Holocaust survivor dead: The alleged shooter, Robert Bowers, was not explicitly anti-Semitic; he was part of a culture in which late-night comedians make fun of people of faith.

“The anti-religiosity in this country that is somehow in vogue…and funny…to make fun of anybody of faith,” Conway said on Fox News on Monday morning. “The late-night comedians…the unfunny people on TV shows—it’s always anti-religious.”

Conway tries to frame Pittsburgh shooting as really being about “anti-religiosity” writ large.

“The anti-religiosity in this country that is somehow in vogue… making fun of people who express religion, the late night comedians,.. It’s always anti-religious.” pic.twitter.com/yw6ZvY1CIQ

Conway also compared the tragedy in Pittsburgh to the shooting in Charleston, South Carolina, that left nine black churchgoers dead. “Remember, these people were gunned down in their place of worship, as were the people in South Carolina several years ago,” she said. In 2015, Dylann Roof, a 21-year-old white supremacist went to Mother Emanuel AME Church and shot and killed nine people who were having a Bible study. He was subsequently charged with 33 federal hate crimes and sentenced to death in 2017.

The suspect in the Pittsburgh shooting, Robert Bowers, is facing 29 federal charges, some which carry the penalty of death. During the shootout on Saturday morning, Bowers allegedly told police officers “I just want to kill Jews” and that Jewish people were “committing genocide to my people.” The suspect was also active on Gab, a social media platform that bills itself as a “free speech” website to serve as a safe space for white supremacists, neo-Nazis, and other right-wing extremists to air their toxic views. On the site, Bowers posted conspiracy theories about Jewish people and complained that Donald Trump was too soft on the community. Just before he entered the synagogue, Bowers wrote “HIAS likes to bring invaders in that kill our people. I can’t sit by and watch my people get slaughtered. Screw your optics, I’m going in.”

Roof and Bowers held similar views. While Roof was awaiting trial, he wrote a diary revealing his motives that would later be read aloud to jurors at his trial. He ranted against Jews,  black people, Muslims, the LGBT community, and others. He showed no remorse for the innocents he slaughtered, but saved his pity for “the innocent white children forced to live in this sick country, and I do feel sorry for the innocent white people killed daily at the hands of the lower races.” In 2015, conservatives tried to spin the Charleston shooting as an attack on religion, ignoring the fact that white supremacists have long targeted black churches because they have historically been gathering places for community organizers and civil rights activists.

Since Donald Trump became president, anti-Semitic attacks have been on the rise. The Anti-Defamation League identified 1,986 such incidents in 2017, up from 1,267 in 2016. Perhaps Conway is reviving this old talking point to distract from Donald Trump’s incendiary language, but as more information emerges about Bowers it becomes clearer that the real link between these two acts of unspeakable violence is not opposition to religious people; it’s white supremacy.