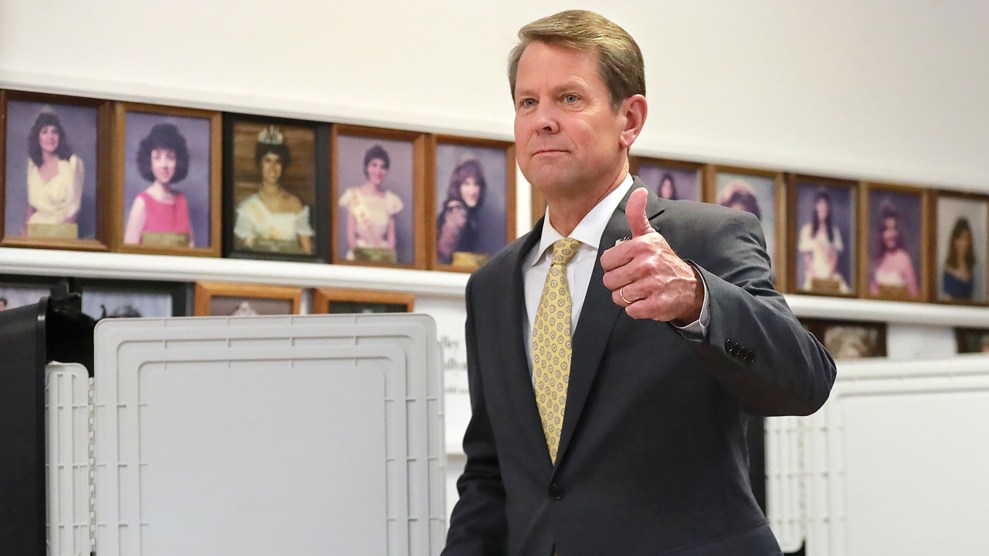 Georgia Secretary of State Brian Kemp casts his ballot in his runoff election for GOP gubernatorial nomination in July.Curtis Compton/TNS via ZUMA

A civil rights group sued Georgia Secretary of State Brian Kemp and Gwinnett County on Monday night over the county’s high rejection rate of absentee ballots from people of color. The rejection rate for white voters is 2.5 percent, whereas it’s 8 percent for African Americans and nearly 15 percent for Asian Americans.

The Gwinnett absentee ballot accepted and rejected counts and rejection rates by race as of the evening of 10/15 pic.twitter.com/COk5b6J6W9

The suit was filed in federal court by the Coalition for Good Governance on behalf of several voters whose ballots were discarded. It seeks to stop the county’s aggressive discarding of ballots and provide time for those who have already been disenfranchised to ameliorate whatever issues caused their ballots to be discarded.

Kemp is the Republican candidate for governor. The lawsuit alleges that the policies of his office caused absentee ballots to be rejected. In 2016, Georgia’s rejection rate for mail-in ballots was the third highest in the country. This is the second voting rights suit against Kemp in less than a week. Last Thursday, civil rights groups sued his office for a policy that blocked 53,000 people, most of them minorities, from registering to vote.

“Certain Georgia laws and policies prevent the counting of valid ballots cast by eligible voters merely trying to exercise their right to vote,” Marilyn Marks, executive director of the Coalition for Good Governance, said in a press release.

According to the Atlanta Journal-Constitution, most of the rejections are the result of voters making errors when they fill out the outside envelope of their absentee ballot, where they are required to provide their date of birth and signature.

The complaint alleges that Georgia, and Gwinnett in particular, have a history of “rejecting an alarmingly high percentage of mail ballots.” It asks for a number of remedies, including notifying rejected voters by one-day mail, telephone and email and a “bi-partisan signature review team.”

It also asks for voters to “be given until the Friday after Election Day to resolve any…mail ballot eligibility questions.”

Election expert Michael McDonald of the University of Florida says Gwinnett County’s bilingual ballots are confusing and might be the source of the problems:

This is Gwinnett’s ballot return envelope. Gwinnett was recently covered by VRA Sec 203 language provisions, and is now required to provide bilingual election material. Note the line to provide a voter’s birth year mashes English and Spanish in a way that is causing confusion pic.twitter.com/JfXNjosqVu