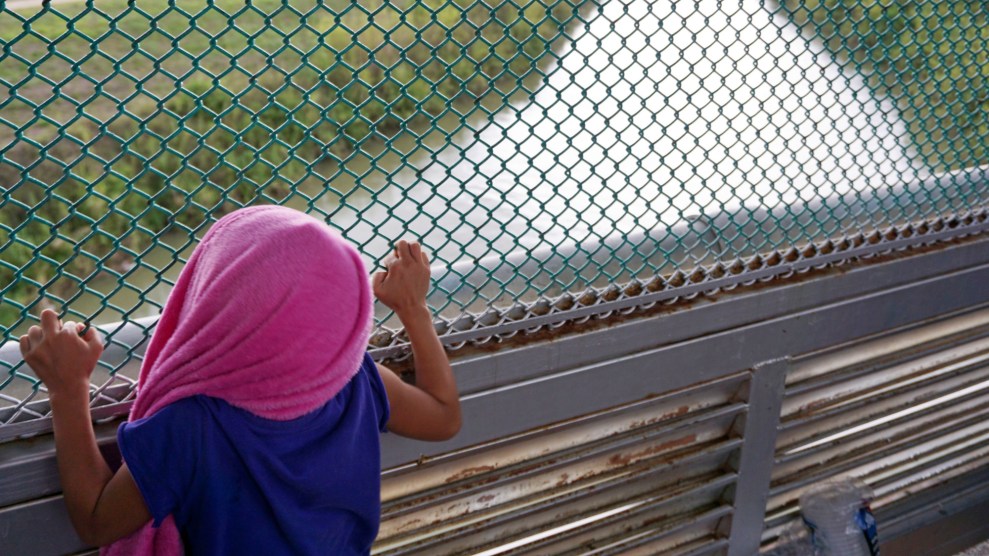 Genesis, a five-year-old from Honduras, peers through fencing in June along a bridge connecting Brownsville, Texas, and Matamoros, Mexico.Miguel Roberts/AP

The Department of Homeland Security’s internal watchdog has concluded that the agency was not fully prepared to implement the zero-tolerance policy that separated more than 2,000 immigrant families this summer. The report released on Tuesday by DHS’s Office of Inspector General provides an inside look at how bureaucratic incompetence and indifference exacerbated the suffering caused by family separations.

OIG’s main findings were that DHS failed to adequately track separated families, held children in short-term detention for longer than the law generally allows, and may have encouraged asylum-seekers to cross the border illegally by forcing people to wait at official ports of entry. The report also states that some families may have been separated so that Customs and Border Protection (CBP) officials could fill out less paperwork.

The Trump administration’s family separation policy, which began on a wide scale in April and ended when President Donald Trump abandoned it on June 20, split families by prosecuting parents for crossing the border without authorization. Their children were then classified as “unaccompanied minors” and transferred to the custody of the Department of Health and Human Services. The OIG report provides further confirmation that the Trump administration adopted the family separation policy without developing a plan or the technical infrastructure needed to track and quickly reunite families after parents were prosecuted.

During the family separation crisis, DHS Secretary Kirstjen Nielsen and Attorney General Jeff Sessions told asylum-seekers that they could avoid being separated from their children by requesting protection at official ports of entry. Yet in May, as the family separation policy ramped up, CBP officials began blocking asylum-seekers from setting foot in the United States when they requested protection at ports of entry. They continue to tell asylum-seekers that they need to wait on the Mexican side of the border until there is enough capacity to process them.

This “metering” has led some families to wait for more than a week on or near the bridges over the Rio Grande, in intense heat. Two asylum-seekers told OIG they crossed the border illegally after being turned away at a port of entry. A Border Patrol supervisor said illegal entries increase when metering is in place. It is unclear how many families have been apprehended while crossing the border and then separated after first going to a port of entry.

Under US law, unaccompanied children who are apprehended crossing the border must be transferred to HHS within 72 hours, unless there are “exceptional circumstances.” The Inspector General found that nearly one-third of separated children—at least 861 children—were held at short-term CBP processing facilities for longer than 72 hours. In one case, a separated child was held for 25 days in the Rio Grande Valley border sector. As the Washington Post reported, many of the children were detained in chain-link pens.

DHS and HHS also lacked basic systems for sharing information about separated families, making it harder to harder to reunite them and easier deport parents without their children. The report states:

ICE officers reported that when the Zero Tolerance Policy went into effect, ICE’s system did not display data from CBP’s systems that would have indicated whether a detainee had been separated from a child. They explained that although CBP enters this family separation data into certain fields within its own system, those particular fields are not visible in ICE’s system. As a result, ICE officers at the Port Isabel Detention Center stated that when processing detainees for removal, officials initially treated separated adults the same as other detainees and made no additional effort to identify and reunite families prior to removal.

At some point, CBP officials began using a free text field to record family separation information because that field is visible in ICE’s system. However, that information was apparently not consistently recorded and is not searchable. Therefore, without reviewing individual files, ICE was unable to determine which aliens had been separated from their children.

DHS claimed on June 23 that it had “a central database” that HHS and DHS could use to keep track of separated family members. The Inspector General’s office “found no evidence that such a database exists.” Multiple Immigration and Customs Enforcement employees, including some who were working at headquarters to reunify separated families, said they weren’t aware of that database. Two officials suggested the database was actually what the report calls a “manually-compiled spreadsheet.” That explanation is not plausible because the spreadsheet was created after June 23, according to OIG. “DHS has since acknowledged to the OIG that there is no ‘direct electronic interface’ between DHS and HHS tracking systems,” the report states.

The report concludes with four “Additional Observations.” One is that Border Patrol does not appear to “take measures to ensure that pre-verbal children separated from their parents can be correctly identified.” Specifically, Border Patrol agents do not provide them with bracelets or other ways for officials to identify them. In its final observation, OIG finds that CBP may have separated families to avoid filling out paperwork:

CBP may have been able to avoid separating some families. In McAllen, Texas, many adults prosecuted under the Zero Tolerance Policy were sentenced to time served and promptly returned to CBP custody. Several officers at CBP’s Central Processing Center in McAllen stated that if these individuals’ children were still at the facility when they returned from court, CBP would cancel the child’s transfer to HHS and reunite the family. However, CBP officials later arranged to have adults transferred directly from court to ICE custody, rather than readmitting them where they might be reunited with their children. According to a senior official who was involved with this decision, CBP made this change in order to avoid doing the additional paperwork required to readmit the adults.