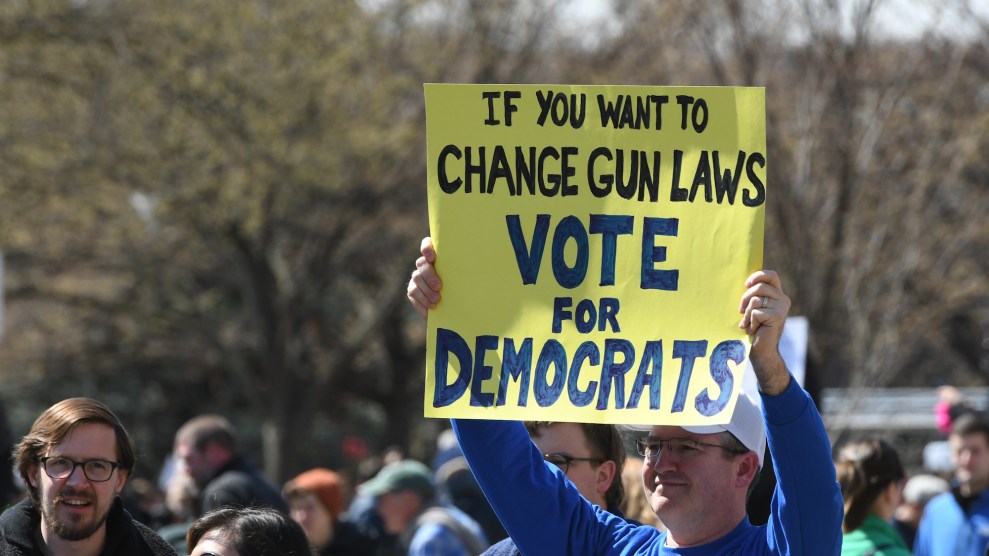 A protester carries a sign during the March for Our Lives on March 24, 2018 in Washington, DC.Cal Sport Media via AP

When Everytown for Gun Safety released a list of more than 70 political endorsements this week, most of the names were unsurprising. The influential gun control group backed by former New York City Mayor Michael Bloomberg threw its weight behind dozens of Democratic candidates for state and federal office. But one name stood out: Brian Fitzpatrick. The freshman Republican congressman is facing a fierce reelection fight in a suburban Pennsylvania district won by Hillary Clinton. And in a year when voters are paying closer attention than ever to guns, Everytown’s backing provided a welcome boost in a race that could help decide which party controls Congress next year.

“Everytown’s actions reflect who we are. We felt really strongly that we needed to send a message to Everytown that this is not okay.”

Some of the gun violence prevention movement’s most powerful players have identified Fitzpatrick as a rare Republican ally—one of the few members of his party willing to buck the National Rifle Association and voice support for modest firearms regulations. Gun control advocates have, for example, cheered his 2017 vote against a bill that would require states to recognize concealed-carry permits issued by other states, legislation that was a top priority for the NRA. Fitzpatrick has also co-sponsored legislation that would ban bump stocks, expand background checks, and raise the minimum age required to purchase firearms to 21. Earlier this year, he sought out and received the “Gun Sense Candidate” distinction from Moms Demand Action, the volunteer grassroots network that has existed under Everytown’s umbrella since 2014.

But Everytown’s decision proved deeply controversial for other gun control activists, who point out that Fitzpatrick’s record hasn’t always reflected their priorities. As I reported this summer, after Fitzpatrick voted against the concealed carry reciprocity bill last year, he wrote a letter to constituents explaining that he’d opposed the legislation because it contained unspecified “extraneous provisions,” and he said that he still hoped to support a future reciprocity bill. “In an increasingly polarized environment where law-abiding gun owners unfairly find themselves demonized by partisan politicians and the media, advancing reciprocity is a critical step in protecting Second Amendment rights from the whims of partisan legislators and activist judges,” the letter said.

Members of the local Moms Demand Action group in Bucks County—the county that makes up most of Fitzpatrick’s district—told me that Fitzpatrick shared a somewhat different story when he met with the group after the Parkland massacre. According to these activists, Fitzpatrick at the time affirmed his support for concealed carry reciprocity but said he didn’t support the House measure because it didn’t include universal background checks. That position, in combination with Fitzpatrick’s past absence from the group’s events, motivated several of the local Moms Demand members to back Democrat Scott Wallace, who also received a “Gun Sense Candidate” distinction from the group and has put gun control front and center in his campaign.

Some members of the Bucks County group began worrying an Everytown endorsement of Fitzpatrick might be in the works when federal campaign reports showed he’d received $1,000 from the national group in June. They’d shared their concerns with an Everytown liaison, asking the national political arm—which, while housed under the same Everytown banner as Moms Demand Action, doesn’t coordinate with the grassroots group—to stay out of the race. But this week, Everytown announced its support for Fitzpatrick and other candidates in a press release that promised, “Moms Demand Action volunteers will be making calls, knocking on doors and turning out the vote for them in November.” The Bucks County group’s disappointed leaders then emailed their roughly 100 members to inform them that the local group, under their leadership, would cease to exist.

“I think Moms is an amazing organization,” says Jessica Getz, one of the leaders who left the Bucks County group. “But Everytown’s actions reflect who we are. We felt really strongly that we needed to send a message to Everytown that this is not okay.”

That view is by no means unanimous among the Bucks County activists. Everytown’s Taylor Maxwell noted that the local organization still has many volunteers in the area and that it would be inaccurate to say the local group no longer exists.

Gun reform, of course, belongs to no party. Polling conducted in the wake of the Parkland massacre found that 97 percent of Americans support expanded background checks. Some of the states that have been most successful in their quest for tougher gun legislation—such as Massachusetts, Vermont, and Florida—are led by Republican governors. Everytown and Giffords have tried to reinforce that message by endorsing candidates from both parties, a move that even some of their strongest Democratic allies have applauded.

“In the current political climate, things will not see the light of day if the Democrats don’t take over the House.”

But the reason gun control has stagnated at the federal level since the 2012 Sandy Hook Elementary School massacre is that Republican leadership, helmed most recently by Senate Majority Leader Mitch McConnell (R-Ky.) and House Speaker Paul Ryan (R-Wis.), has refused to take up the issue. Politicians and pundits generally agree that any meaningful progress on gun legislation would require Democratic control of Congress. Indeed, flipping the House is the stated priority of groups like Everytown, Giffords, and the Brady Campaign to Prevent Gun Violence. These organizations have long awaited the moment when gun control might become a bipartisan issue, and the national outcry that followed Parkland initially seemed like it could be a tipping point. But the political reality—for this election cycle, anyways—is that GOP leaders simply aren’t going to buck the NRA.

Endorsing Republicans is a delicate dance. There’s no doubt that moderates like Fitzpatrick and Lance have records that are far more palatable to gun control advocates than those of most GOP lawmakers. But some of the Democrats who have been snubbed by these groups have actually staked out much stronger gun control positions. Long Island Republican Pete King, who received a nod from Everytown, has no stated position on gun safety on his campaign website, while his Democratic challenger, Liuba Grechen Shirley, lays out a three-point plan for banning assault weapons, establishing universal background checks, and keeping guns out of the hands of domestic abusers. Lance, like every other House Republican, has failed to sign on to a proposed assault weapons ban, something his Democratic challenger, Tom Malinowski, supports. Wallace—who’s been on the airwaves since May with ads touting his support for an assault weapons ban, universal background checks, and “red flag” laws designed to keep guns out of the hands of people who pose a risk to themselves or others—attended the March for Our Lives rally in Doylestown, Pennsylvania. Fitzpatrick was a no-show.

“I think, in an attempt to try to seem bipartisan, Everytown is grading Republicans on a curve, and I don’t believe that’s fair,” says Lauren Winward, another one of the Bucks County Moms Demand Action leaders who departed the group earlier this week. She notes that even Fitzpatrick has acknowledged the gun control measures he supports are unlikely to get a vote if Republicans continue to control Congress.

“Moms Demand Action is not a partisan group, but in the current political climate, things will not see the light of day if the Democrats don’t take over the House,” Winward say. She added that she’d support a “true vocal and visible” Republican ally, even in this partisan environment. But to her, Fitzpatrick isn’t that.

What adds pressure to these dynamics is the fact that most of the controversial endorsements have come in competitive races that Democrats think they can win. The Democratic Congressional Campaign Committee—the national party arm charged with getting Democrats elected to the House—has identified three of the five Republicans backed by gun control groups as being among their highest-profile targets. Gun safety, a top voting issue this year, has had particular resonance in suburban districts, where control of the House could be determined. The DCCC has done its own competing work to criticize the gun records of the GOP incumbents. Last month, the organization released a TV ad drawing attention to Lance’s past opposition to an assault weapons ban.

In some ways, these endorsements may be mostly symbolic gestures. A nod from one of the groups may come with a campaign contribution, but federal election law caps such donations at $5,000. The real prize this cycle is the seven-figure independent expenditures groups like Everytown and Giffords have doled out—and in congressional races, those have so far been reserved for Democratic candidates aiming to unseat NRA-backed Republicans.

And an endorsement is a way of making friends and hedging bets. “If Republicans remain in control of Congress, having leaders like Brian Fitzpatrick is even more important,” Isabelle James, Giffords’ political director, told me earlier this summer when I asked her about the group’s Fitzpatrick endorsement. “He can work behind the scenes to help block the gun lobby’s dangerous agenda.”

Everytown’s Maxwell echoed that stance. “When Republicans do the right thing, we’re going to stand with them,” she said, recounting Fitzpatrick’s vote against concealed carry reciprocity and his co-sponsorship of a red-flag bill. “As an organization with more than 5 million supporters, it’s unlikely we’ll all always agree. But it’s essential to work across the aisle and prove that this issue is about safety—and owned by no political party.”

But what’s perhaps most noteworthy is the fact that voters are scrutinizing these groups’ endorsements at all. The money and influence that gun control advocates are wielding this cycle speaks to the rapid maturation of a movement that was rebuilt in the wake of the Sandy Hook massacre, just six years ago. Shannon Watts, the founder of Moms Demand Action and Kris Brown, a co-president of Brady—which has not yet endorsed any Republicans this cycle—both said their groups can barely keep pace with the requests for endorsements and support. “We are really at a watershed moment with the number of candidates we’ve endorsed who are truly running on this issue,” Brown said over the summer. “It’s almost evolutionary in my mind, like the next phase of an organism at its growth.”