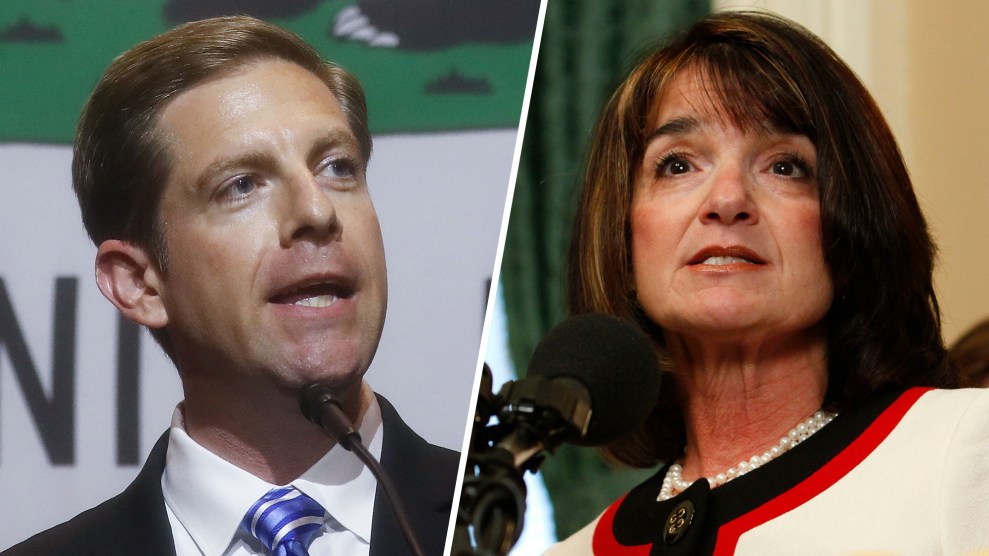 Shortly before a San Diego television station airs a pre-recorded debate between Democratic House candidate Mike Levin and his Republican opponent Diane Harkey, Levin warns me, “It gets a bit heated. Someone must have told her she needs to go on the attack.”

Levin, an environmental attorney, and Harkey, a former state assemblywoman, are battling over California’s 49th District, a strip of coastline straddling southern Orange and northern San Diego counties. For the past 18 years, it’s been represented by political lightning rod and Obama administration foe Rep. Darrell Issa, who early this year announced that he would not run for reelection.

Levin and Harkey met for their second debate last Thursday afternoon. As it was about to be broadcast that night, about 40 of Levin’s campaign staffers and volunteers gathered at his Solana Beach campaign headquarters for a viewing party.

“I’m curious how she’ll come off in this,” he says in his office beforehand. “Sitting across from her, some of what she said was just…unbelievable. And I’m sitting there thinking, What the hell am I even watching?” He stresses that he “tried to be respectful,” but adds, “If you’re attacked, you’re going to respond.”

Soon after the broadcast begins, Levin, surrounded by his supporters, stifles a grin as he watches Harkey answer the moderator’s first question: How should the United States deal with the migrant caravan making its way toward the southern border? “Well, number one,” she says, “I think it’s just criminal that these people were sent up to trek for thousands of miles and with no guarantee of anything,” Harkey begins.

“Sent up?” someone in Levin’s crowd blurts out. “What’s she talking about?”

Harkey continues, getting in some choice words about “gun runners,” “human traffickers,” and “money launderers.” She calls the caravan “politically motivated”—a phrase she utters frequently—which draws eye rolls from the Levin camp. When she concludes her answer by saying that the caravan is made up of people trying to escape from Venezuela, the room erupts in laughter. “That’s not where they’re coming from,” Levin stage whispers.

On screen, Levin pounces. He calls President Donald Trump’s proposed border wall “a monument to his own ego,” and slams the administration’s anti-immigrant policies. “We’ve seen draconian policies like family separation, and yet we still see those who are desperate for safety trying to flee.”

The obvious differences between Levin and Harkey are a window into the district they’re competing for. The 49th has long been known as a predominantly white, wealthy, and fairly conservative Republican stronghold. But redistricting in 2011 and a growing Latino population have fueled a steady shift to the left. Republicans still have the voter advantage, but it’s been shrinking. That dynamic became apparent in 2016 when Issa, who’d previously throttled opponents by double-digit margins, barely eked out a half-point victory over his Democratic challenger. Overall, voters in Orange County—Reagan Country—backed Hillary Clinton over Trump by a 9-point margin, the first time the county went to a Democrat for president since 1936.

In August, Trump tweeted that Harkey is “an extraordinary woman of great accomplishment & potential.” But Harkey’s association with the president—and her Trumpian disregard for the facts—does not seem to be helping her. “It’s a district that Hillary won, so a Trump endorsement is probably not good for her,” says Oceanside Councilman Jerry Kern, a Republican. And running as a Trump conservative won’t necessarily help her with the local breed of “coastal Republican”—”that moderate, almost liberal Republican.”

The 49th is one of the 10 California districts the Democratic Congressional Campaign Committee has focused on flipping from red to blue. So far, the numbers are looking good for Levin. In the last quarter, he raised $2.3 million to Harkey’s $616,000. A New York Times poll conducted last Wednesday showed Levin leading by 14 points—a jump from a September poll that already had him at 10 points ahead. (Levin’s own internal polling shows him leading, but by a slimmer margin.) “If this was a normal cycle, I would say Diane would have no problem,” Kern says. “But in the age of Trump, this whole different dynamic, it’s really a toss-up.”

Harkey also brings a lot of baggage to the race. She was long involved in local politics, serving as the mayor of Dana Point and a state assembly member before joining what Kern calls the “black hole of politics”—the state Board of Equalization. While she was there, a state audit criticized its members, including Harkey, for mismanagement, nepotism, and improperly using regular employees for political benefit. Harkey told the San Diego Union-Tribune the charges were “politically motivated.”

Harkey’s candidacy has been dogged by reports of her husband’s multimillion-dollar Ponzi scheme. In 2013, Dan Harkey and his real estate company were found liable for $10 million in damages for swindling senior citizens, including some who lost their life savings. In July, a state appeals court affirmed the judgment against Dan Harkey, declaring that “substantial evidence” shows that Harkey “looted the plaintiffs’ investment funds by running a Ponzi scheme.” (Diane Harkey was dismissed from the lawsuit in 2013. She has repeatedly denied that her husband was responsible for the losses, and instead blamed the 2008 real estate crash for investors’ losses.)

In a district where a Trump endorsement may hurt more than it helps, there is another issue that might give Harkey problems: the environment. As one local Republican operative told me last year, the 49th is “a highly environmentally conscious district,” where Republicans “can’t really win being anti-environment.” Though climate change is one of the least sexy themes of the current election, Levin has made it central to his campaign. Last week, he told a crowd at a meet-and-greet at a Montessori school in Solana Beach that climate change is the most important issue facing Americans. “If we don’t get this right,” he said, “nothing else is going to matter…There’s no Planet B here, folks.” Harkey has repeatedly side-stepped the topic by emphasizing that she’s not a scientist. “I can’t read all of that stuff and make a decision,” she told the San Diego Union-Tribune. “I’m an economist person.”

“It’s a district that Hillary won, so a Trump endorsement is probably not good for [Harkey].”

Positioning herself as a “tax fighter,” Harkey has also supported Proposition 6, a state ballot measure that would repeal the gas tax and vehicle registration fee increases passed in 2017 to fund infrastructure improvements. At a recent rally, Harkey called the gas tax a “fraud” and suggested it would make driving unaffordable: “It’s forcing you to take bikes, get on trains, hose off at the depot, and try to get to work. That does not work. That does not work with my hair and heels. I cannot do that and I will not do that.” (State Sen. Scott Weiner of San Francisco tweeted that he’d seen “many drag queen ride bikes” with “hair & heels.”)

Even as her rhetoric has made headlines, Harkey hasn’t been very visible in the district, Kern notes. “She did do some outreach, some workshops for taxpayers and things like that,” he says. “But quite frankly they weren’t real well attended, and they were very narrowly focused.” Levin has attended approximately 25 protests that progressive activists have held outside Issa’s office since 2016, and he’s participated in nearly 200 meet-and-greets. Francine Busby, the former chair of the San Diego County Democratic Party, credits Levin with a strong “ground game.” “Mike knows how to run a campaign, and he can connect with people,” she says.

Back at Levin’s debate watch party, the mood in the room swings between amused and cringey as Harkey continues her increasingly antic harangue about the migrant caravan, which she falsely claims has 7,000 people in it. (It’s currently half that.) “How are you going to deal with that, Mike? I mean, it’s ridiculous… Are you going to open up your front door and let them come in? I don’t think so!” The screen is split between her and Levin, who finally breaks into a laugh. “Well, I support comprehensive immigration reform,” he responds, “and common sense.”

During a break, Levin says to the crowd watching with him, “Hold on to your hats, folks. It gets worse.” On screen, Levin points out that Harkey has been endorsed by San Diegans for Secure Borders—which the Southern Poverty Law Center classifies as an anti-immigrant hate group—and the San Diego Patriots, which called the deadly Parkland, Florida, massacre a “false flag” conspiracy theory.

The moderator hangs back as Levin and Harkey spend much of the 30-minute debate trading jabs. He calls her out for her 93 percent lifetime rating from the National Rifle Association and for taking money from the Koch brothers. (She received $5,000.) Harkey calls Levin “a carpetbagger” who “just moved into the neighborhood” (that’s not accurate) and says, on multiple occasions, that he will be “Nancy Pelosi’s pet” if he’s elected. The debate devolves into a confounding argument over the word “resist,” which Harkey uses to pivot to a tirade on the liberal policies she opposes. Just as she is really getting revved up, the television feed cuts out.

“That was a good time to cut her off,” someone says. “How did you stay so calm with her?” asks another. When the showdown finally ends—only after Harkey interrupts Levin’s closing statement—his team is clearly happy with its candidate’s performance. Levin’s campaign manager, Adam Berkowitz, leans over to me and says, “I can see why they didn’t agree to more debates.”