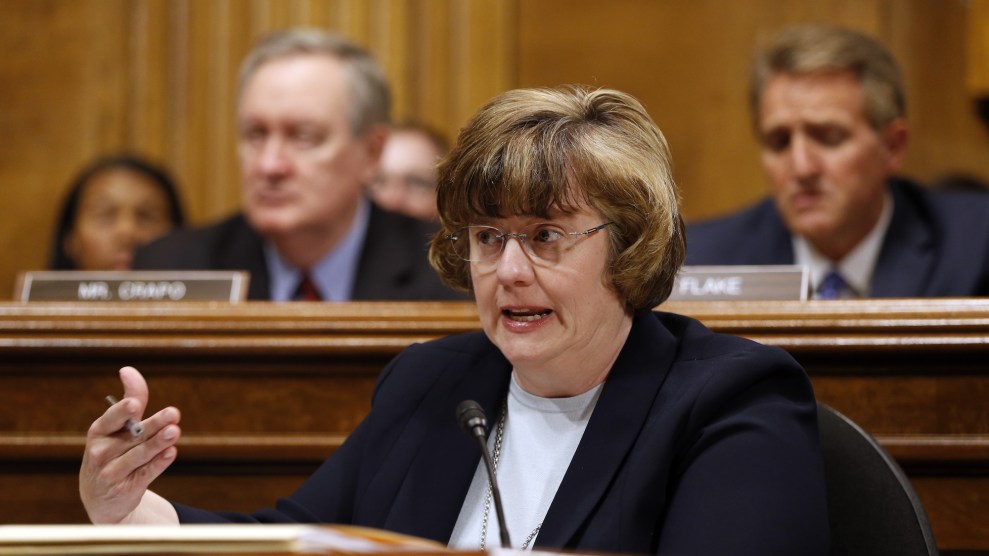 A former colleague of Rachel Mitchell, the sex crimes prosecutor hired by Senate Republicans to question Christine Blasey Ford, blasted Mitchell for writing a memo casting doubt on Ford’s allegations against Supreme Court nominee Brett Kavanaugh. Matthew Long, a former sex crimes prosecutor who was trained by Mitchell in the Maricopa County, Arizona, attorney’s office, told Mother Jones the memo was “disingenuous” and inconsistent with Mitchell’s own practices as a prosecutor. “I’m very disappointed in my former boss and mentor,” Long said.

On Sunday, Mitchell submitted the memo to the Republicans who had hired her, stating that Ford’s case would be too weak to bring charges in a criminal trial. “A ‘he said, she said’ case is incredibly difficult to prove,” Mitchell wrote. “But this case is even weaker than that…I do not think that a reasonable prosecutor would bring this case based on the evidence before the Committee.”

The memo rankled Long, beginning with how Mitchell framed it. “I find her willingness to author this absolutely disingenuous. She knows better,” Long said. “She should only be applying this standard when there’s an adequate investigation.” Rather than jump to conclusions, Mitchell should have laid out the steps that needed to be taken in order to gather enough information to make a determination about the case. “Mitchell doesn’t have sufficient information to even draw these conclusions,” he said.

Mitchell’s memo emphasized Ford’s inability to recall with certainty the timeframe of Kavanaugh’s alleged sexual assault of her when they were both in high school. Mitchell pointed out that in some interviews, Ford said the attack happened in the “mid-1980s,” and in others, in the “early ’80s.” Long found this section of the memo insincere. “I challenge Ms. Mitchell directly on this issue, because her office often charges cases with a very expanded timeline,” he said. Victims are often unable to pinpoint the exact date of an attack, and Mitchell’s office, he said, will often bring charges for an act that can’t be narrowed down to a more specific time period than a window of several years. “I was trained explicitly by her to not consider this time thing as an inconsistency,” he said.

Long, who now works partly as a defense attorney, said he is currently defending a former police officer charged with a 30-year-old crime by Mitchell’s office, which has given a broad time range in which the crime is alleged to have taken place. “They apparently have no problem with expanding the timeline when it comes to the people they charge, but she wants to apply a different standard to Kavanaugh,” he said.

Mitchell stated in her memo that potential witnesses named by Ford have “either refuted her allegations or failed to corroborate them” in signed statements submitted to the committee. “That’s absolute bullshit,” said Long, again arguing Mitchell is applying a different standard to Ford’s case than she would to an investigation her own office was pursuing. “It’s bullshit because all we have are these signed statements, which are unreliable. They’re hearsay. They wouldn’t meet any type of standard Ms. Mitchell would allow in considering their statements, but instead would have demanded they be interviewed in a full-blown interview to really flesh out these people’s motivations.” As a judge, he added, Kavanaugh, who leaned on these statements in his own testimony before the Senate, knows they do not meet a standard of reliable testimony.

Long next attacked a section of the memo in which Mitchell focused on Ford’s inability to recall certain details about the circumstances of the assault, including whose house she was at, who invited her, how she got there, and how she got home. “The spotty memory Ms. Mitchell talks about, as if that’s an indication it didn’t happen, is just absurd,” he said. “Again, I was trained by Ms. Mitchell about how trauma explicitly does prevent memory from happening.” Trauma causes the body to go into “fight, flight, freeze,” a survival mode that creates tunnel vision and prevents certain memories from forming that might otherwise have been retained. “I was trained explicitly by Ms. Mitchell to identify that as corroborative, as corroborating that someone has been victimized and experienced trauma,” he stressed. “Ms. Mitchell knows better than that.”

Long was a prosecutor for 12 years, first under Mitchell in Maricopa County, then in neighboring Pinal County for eight years. Under Mitchell, he was trained in investigating sex crimes. He now represents both victims and defendants in private practice. Long said there’s no question in his mind Ford was assaulted. What’s unclear is whether the perpetrator was Kavanaugh or someone else. The situation, he said, requires further investigation. If Mitchell were handling this case in her office, he said, she would not have leapt to conclusions and instead would have demanded further investigation.

“Her only analysis should have been: The process you’ve given me, the information we have, is insufficient,” he said. Moreover, he noted, she didn’t analyze Kavanaugh’s testimony, which contained obvious falsehoods already pointed out by the media, or remark on the unreliability of the accused. To Long, the memo reflected the political theater of a fraught Supreme Court battle rather than the expertise of a seasoned prosecutor. “Rachel Mitchell’s failure to include any analysis of Kavanaugh reveals her political bias,” he said.