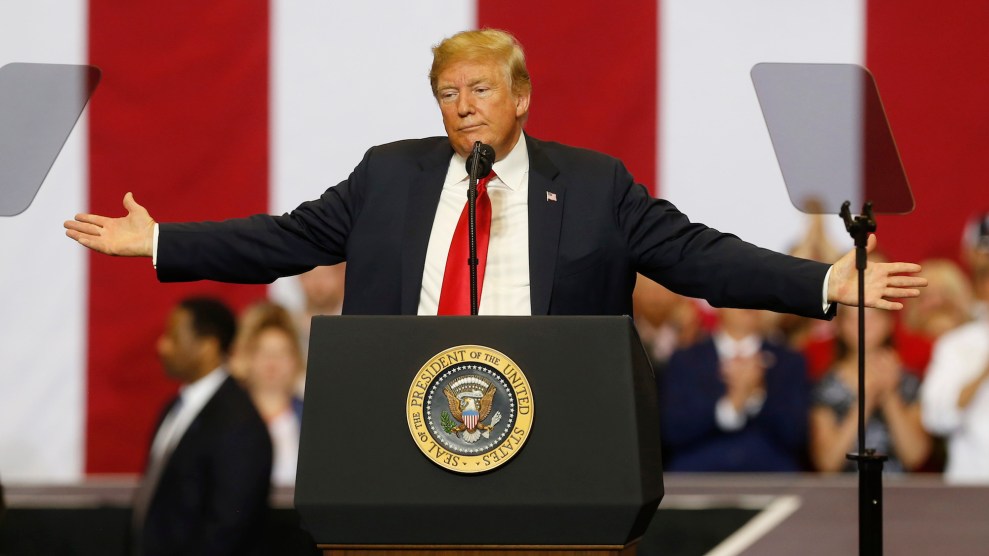 Yet when President Donald Trump held a rally in Fargo in June, he made sure to attack Heitkamp for supporting what he called the “deadly, very very dangerous, horrible” cities. In August, the National Republican Senatorial Committee devoted an entire ad to the issue.

The attacks are part of a coast-to-coast GOP strategy to hold onto congressional majorities by playing into Republican base voters’ fears about immigrants. A new CNN analysis finds that about $124 million has been spent on more than 280,000 immigration-related TV ads this year. That is more than a fivefold increase from the $23 million spent on immigration ads in House, Senate, and governor’s races during the 2014 midterms.

Democratic strategists seem to agree that they’re better off focusing on President Donald Trump and other policy issues. A memo from the liberal Center for American Progress and the centrist Third Way obtained by the New York Times advises Democrats to spend “as little time as possible” talking about immigration. After doing interviews over the summer, the authors concluded that “even the most draconian of Republican policies”—including Trump’s family separation policy—were unlikely to help Democrats in states that Trump won in 2016. On the other hand, the memo sates, “Sanctuary attacks pack a punch.”

A Gallup poll found in early July that 22 percent of Americans believed immigration was the most important problem facing the country—the highest share ever recorded by Gallup. It was only the second time that Americans listed immigration as their top issue. (The other was when unprecedented numbers of Central American children arrived at the border alone in 2014.) In May, only 4 percent of Democrats and 17 percent of Republicans considered immigration the most important issue in the country. Two months later, soon after Trump was forced to abandon his family separation policy, that increased to 18 percent among Democrats and 35 percent among Republicans.

Interest in immigration quickly faded once Trump backtracked on family separation. The percentage of Americans most concerned about immigration dropped from 16 percent to 12 percent between August and September, returning to about the same level as before the family separation crisis. Republicans’ immigration advertising has followed a similar path. About a quarter of pro-Republican ads mentioned immigration between January and August, before dropping to 17 percent in September.

The Washington Post reported on Friday that the Trump administration is considering a new family separation policy, one that would force migrant parents to choose between separation and indefinite detention with their kids. Trump confirmed on Saturday that he is considering the policy. “If they feel there will be separation, they won’t come,” he said. (The Trump administration has not shown that family separation actually deters migrants.)

Meanwhile, ads in others races make the attacks against Heitkamp look restrained. In New York, indicted Republican Rep. Chris Collins tried to smear his Democratic opponent, Nate McMurray, by adding misleading captions about outsourcing jobs to a video of McMurray speaking in Korean. (McMurray’s wife is a US citizen from South Korea.)

In California, another federal indictee, Republican Rep. Duncan Hunter, ran an ad that claims without evidence that his Palestinian-Mexican-American opponent, Ammar Campa-Najjar, is supported by the Muslim Brotherhood. Hunter also falsely insinuated that Campa-Najjar, a Christian, is a “radical Muslim” who is trying to infiltrate Congress. Hunter was indicted in August for allegedly spending $250,000 in campaign money on personal expenses, including a $600 flight for a pet rabbit.