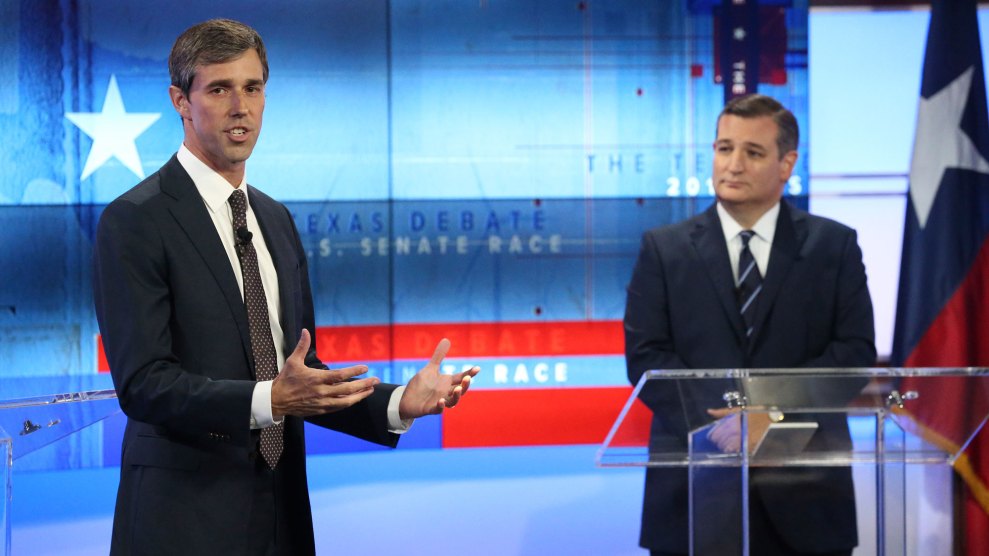 Here’s a revealing stat about the Texas Senate race by way of the Dallas Morning News: Over the last month, 80 percent of the ads paid for by Republican Sen. Ted Cruz and his two allied super-PACs were attacks on his Democratic opponent, Rep. Beto O’Rourke. The percentage of O’Rourke ads that went after Cruz? Zero.

O’Rourke has resisted going negative in part because much of his success is tied up in staying positive. He is the candidate who makes voters feel good, and he does so by talking less about Cruz than about other parts of the state he’s visited, the people he’s met in Abilene and Harlingen and Rockport, the ties that bind, etc. But Cruz’s attacks have taken their toll. Texans now view O’Rourke more unfavorably than they do Cruz, and if you’re losing a popularity contest to Ted Cruz, that’s the ballgame; O’Rourke is down seven points in the RealClearPolitics polling average. Over the weekend, O’Rourke acknowledged that supporters had started asking him when he’d go after Cruz, and he promised to mix things up.

It didn’t take long to see what that looked like. In San Antonio on Tuesday at their final scheduled debate, O’Rourke lit into Cruz from the beginning. Six minutes in, after a question about election security, he brought up the Cruz presidential campaign’s relationship with Cambridge Analytica—”the very company that helped to undermine our democracy.”

A few minutes later, after Cruz weaved uneasily when asked why he disagreed with his state’s own oil companies about climate change, O’Rourke made his most direct personal jab of the night:

“This is what you can expect over the course of the debate,” he said. “Sen. Cruz is not going to be honest with you. He’s going to make up positions that I’ve held, that I’ve never taken. He’s dishonest. It’s why the president called him Lyin’ Ted. And it stuck, because it’s true.”

It was true in more ways than one—what you could expect over the course of the debate was for O’Rourke to keep prosecuting his Case Against Cruz. Perhaps the cleanest version came when the subject turned to the tax cut Cruz backed in the Senate and touted on the debate stage Tuesday. O’Rourke, put on the defensive about the cost of implementing a Medicare-for-all health care plan like the kind he supports, flipped into a different gear to launch an attack on Cruz’s priorities. It’s worth watching the answer in full:

O’Rourke previewed traces of this kind of attack in the first debate and in his speeches and town halls across the state, but during Tuesday’s debate, he returned to it again and again. After all, it’s a theme so simple and apparently self-evident that even President Donald Trump picked up on it. If there was a bumper sticker version of the new O’Rourke message, it was this line: “Ted Cruz is for Ted Cruz.”

The most effective criticisms of Cruz were suggested by the Republican senator’s own comments. Cruz got defensive when the subject turned to the tax cut, telling the moderator he was wrong about projections that showed it ballooning the deficit. (The moderator wasn’t wrong.) He promised, unprompted, to protect health care coverage for people with preexisting conditions—the kind of thing you might say if there’s a well-founded understanding that you’ve spent a large chunk of your career trying to do the opposite. When, on Wednesday morning, O’Rourke debuted his first real contrast ads, it wasn’t a shock to see preexisting conditions front and center:

A second one on health care: pic.twitter.com/H536YCol7e

Both candidates are trying to adjust their image in delicate ways. While O’Rourke finds himself in a new role as attack dog, Cruz, who is and always has been a political Rottweiler, is attempting to find his footing as a voice of sunshine and optimism.

It’s a difficult trick to land. For years Cruz has embraced a reputation as a sort of political wrecking ball, a bad boy of disruption. And Cruz’s message when it comes to O’Rourke has largely been aimed at stoking fear, particularly when it comes to the War on Drugs, law enforcement, and immigration. Stuff like this isn’t subtle.

On Tuesday, Cruz, who famously shut down the government over the Affordable Care Act, argued that an O’Rourke win would be very bad for the discourse, producing “two years of a partisan circus shutting down the federal government.”

“Every one of us has a responsibility to bring civility and respect. That’s something I’ve endeavored to do throughout politics,” he said in response to a question of civility in politics. “The personal attacks and going to the gutter that is so common in politics, I try not to engage in it.”

But even as he waxed about civility, he barked at the moderator not to interrupt.

"Don't interrupt me, Jason," says Ted Cruz as the moderator tried to ask a follow-up question on the importance of remaining civil in debate.#TexasDebate https://t.co/zx11ahFiDT pic.twitter.com/4gxaJK3vw1

When it was time for closing statements, Cruz walked up close to the camera, standing awkwardly in the lights, to make his case. “Elections are about who we are,” he said. “Do we choose fear or hope? I believe in hope.”

If you had to guess which candidate said that at the outset the debate, would you have picked Ted Cruz?