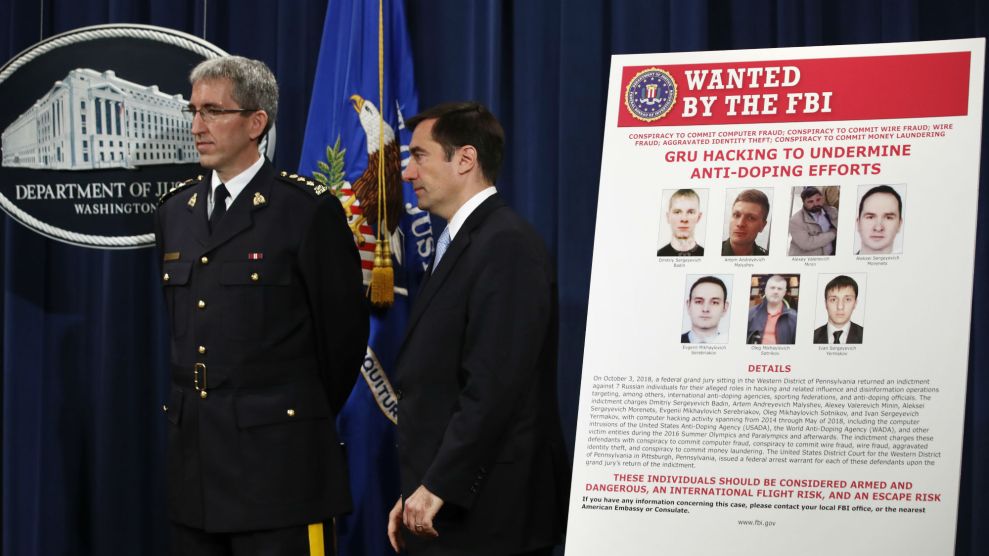 The Justice Department on Thursday brought criminal charges against seven officers of Russia’s military intelligence directorate, known as the GRU, for computer hacking, wire fraud, aggravated identity theft, and money laundering. The charges were unveiled shortly after the British and Dutch governments accused the GRU of directing a series of cyberattacks on European targets.

According to Justice Department officials, the GRU officers hacked anti-doping agencies in the US and around the globe seeking to steal and publish the private medical information of hundreds of athletes, an act of retaliation for Russia’s ban from the 2018 Olympic games over doping by many of the country’s athletes. The DOJ also alleged that the officers targeted Westinghouse Electric Corporation, a nuclear energy company in Pennsylvania; the Organization for the Prohibition of Chemical Weapons (OPCW), an intergovernmental group that polices the use of chemical weapons and which has been probing the March 2018 poisoning of former Russian intelligence officer Sergei Skripal and his daughter in Salisbury, England; and a Swiss lab that analyzed the deadly nerve agent used in the attack on the Skripals.

Three of the GRU officers charged on Thursday—Artem Malyshev, Dmitry Badin, and Ivan Yermakov—were previously indicted by Special Counsel Robert Mueller in July for their role interfering in the 2016 election. According to Justice Department officials, the new indictments, though not technically part of Mueller’s probe, point to similar efforts by Russia to sow chaos through hacking and disinformation campaigns.

In a press conference at the Hague earlier on Thursday, Dutch officials described how they had apprehended and expelled four GRU officers after they launched a cyberattack on the OPCW this spring. The British Foreign Office on Thursday accused the GRU of “indiscriminate and reckless” cyberattacks  against various political, financial, and media institutions in the UK, US, Russia, Ukraine, and more.

The Kremlin has responded to the hacking allegations by denouncing the claims without clearly denying them. Russian Foreign Ministry spokeswoman Maria Zakharova called the UK claims a “diabolical blend of perfume”—a reference to the fake bottle of Nina Ricci perfume used by suspected Russian agents to transport the deadly nerve agent Novichok to the UK for use in poisoning the Skripals.

“They mixed everything up in one bottle, which could be a bottle of Nina Ricci perfume: GRU, cyber spies, Kremlin hackers, and the [World Anti-Doping Agency],” Zakharova said at a press briefing Thursday.

This summer, Special Counsel Robert Mueller indicted 12 GRU officers, accusing them of a participating in a plot to steal and distribute emails from Democratic targets as part of an effort to help Donald Trump’s campaign. Russia and the United States do not have an extradition treaty, and there is little chance the officers in either case will be extradited to the United States in the near future.