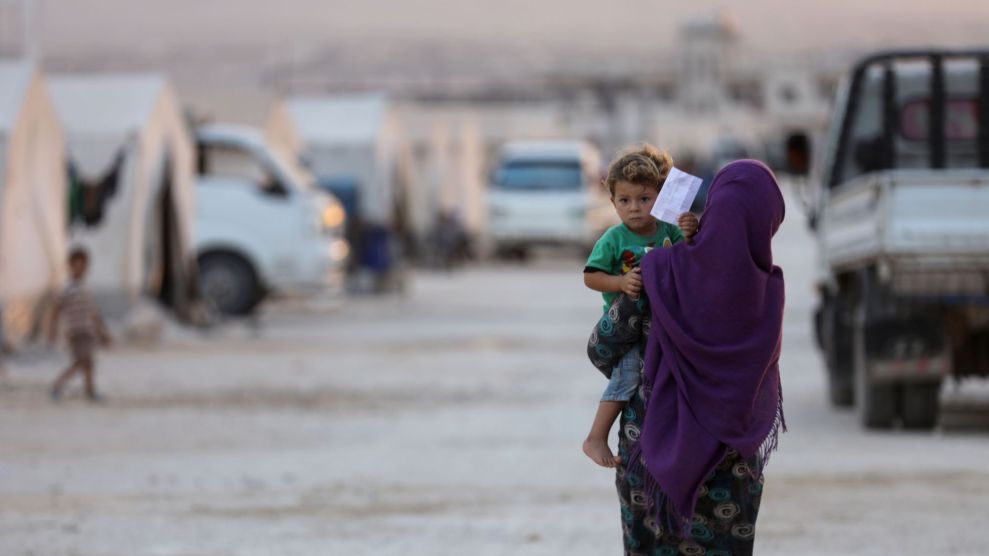 A displaced Syrian woman holds a toddler in camp "Hope" in the Syrian village of Kafr Lusein in September. Omar Haj Kadour/Getty

A year ago, the Trump administration cut the United States’ annual limit on refugee admissions to the lowest level on record. The 45,000-person cap for the 2018 fiscal year, which ended on Sunday, was less than half the 110,000-person limit set by the Obama administration in 2016.

The reality for refugees ended up being far worse. Government data show that the United States ended up letting in only 22,491 refugees in the last fiscal year, just under half the cap. The country has admitted more refugees in every year since at least 1980, when the modern refugee program began. The sharp cutback comes as the number of people across the world who have been forced from their homes reached a record high of 68.5 million last year, according to the United Nations.

Secretary of State Mike Pompeo announced last month that refugee cap for this fiscal year will be 30,000, another record low. As with last year, there is no guarantee that the Trump administration will reach the cap.

The numbers were not a surprise. State Department data on refugee admissions are updated in real time, and it has been clear for months that the Trump administration would fall far short of reaching the cap. In October, the Trump administration effectively banned refugees from 11 countries, most of them with Muslim majorities, for 90 days. Melanie Nezer, a senior vice president at HIAS, a Jewish group that helps resettle refugees, told Mother Jones at the time that the new restrictions meant that the United States was “highly unlikely” to reach the 45,000-person cap.

The drop in refugee admissions from majority-Muslim countries has been particularly severe. In the 2016 fiscal year, for example, the United States allowed in 12,587 Syrian refugees. That fell to 62 in the last fiscal year. The Trump administration has also been far less likely to let in Iraqi refugees with ties to the United States, such as those who served as military interpreters.

Final numbers just provided to me by @statedept show that 51 Iraqi refugees with US affiliations (e.g. former military interpreters) were allowed into US in FY 2018.

Reuters reported last month on the wide range of steps that the Trump administration has quietly taken to slow down refugee admissions:

The administration has instituted opaque and complicated new security vetting procedures that have bogged down admissions and eliminated many candidates for resettlement who would previously have been accepted, many of the officials said. It has extended the strictest kind of vetting to women as well as men from 11 countries, mostly in the Middle East and Africa. And it has reduced by nearly two-thirds the number of officials conducting refugee interviews, reassigning about 100 of 155 interviewers to handle asylum screenings for people already in the country, including those who crossed the border illegally…

One primary source of the long delays, five current or former officials told Reuters, is the Federal Bureau of Investigation, which shares responsibility with other intelligence agencies for Security Advisory Opinions, the extra background checks now required of most refugees from the 11 countries.