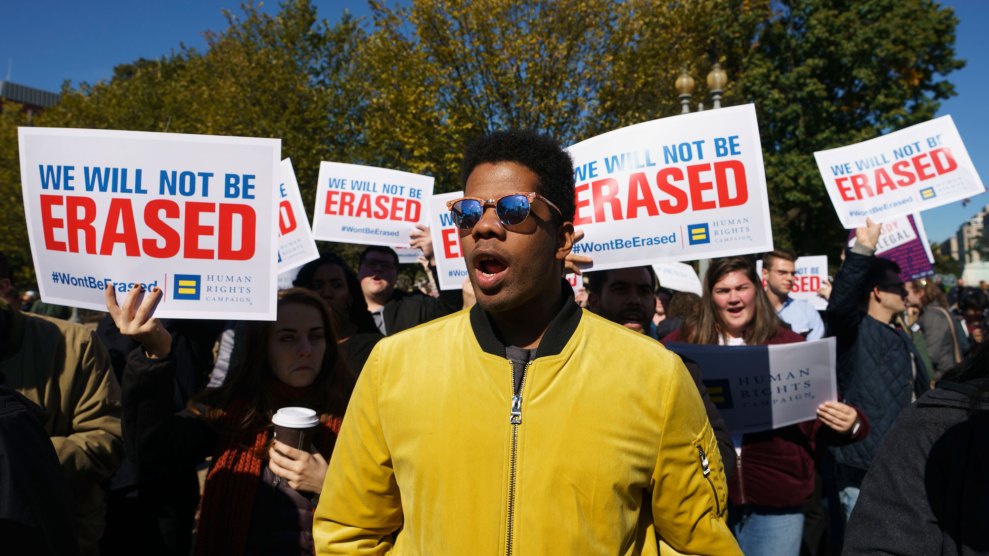 Demonstrators gather in front of the White House on Monday to protest the administration's new memo on defining a person's sex.Carolyn Kaster/AP

A Department of Health and Human Services proposal urging federal agencies to narrow the legal definition of a person’s sex “stands to inflict significant harm on the transgender community,” an Obama-era civil rights official told Mother Jones on Monday.

Jocelyn Samuels, a former HHS civil rights chief, said in an interview that the Obama administration took the stance that people were protected from discrimination under federal law based on their gender identity. The Trump administration, Samuels said, “is seemingly attempting to eviscerate that understanding.”

If the proposal were enacted as drafted, Samuels argued, it would have a chilling effect on transgender people hoping to bring claims of gender discrimination to the federal government and those who are expecting protection from discrimination by federally funded health care services.

I spoke to Samuels, now executive director of the University of California-Los Angeles’ Williams Institute, about the administration’s proposal and what it means for trans rights moving forward. Our conversation was edited for length and clarity.

Mother Jones: How is this proposal consistent with how the Trump administration has treated the rights of transgender people?

Jocelyn Samuels: This administration has repeatedly signaled its view that sex discrimination does not apply to discrimination based on gender identity. They withdrew a Department of Education guidance protecting trans students from harassment and other adverse treatment in school. They have reportedly refused to process complaints filed by transgender students through the administrative complaint system. The attorney general issued a memorandum saying he was disavowing a prior Justice Department interpretation that gender identity discrimination was covered under employment discrimination laws and the administration has filed briefs to that effect. They have signaled that they are planning to revise regulations under Section 1557 of the Affordable Care Act that said gender discrimination was prohibited in federally funded health care, and that they are going to rescind those provisions.

“This memo is sending a clear message to the transgender community that they have no protection.”

In this memo, they seem to be going even further in saying not simply that gender identity discrimination is not prohibited under existing civil rights laws, but that it is the government that has the right to determine a person’s sex. I haven’t seen the memo itself. It is a remarkable expansion of their legal position to now say that the government will accept as evidence of someone’s sex exclusively a birth certificate or some kind of genetic testing. It stands to inflict significant harm on the transgender community. I think it is significantly broader than that. It suggests that anyone who does not identify with the sex on their birth certificate is now going to be forced to prove via genetic testing that they are who they believe themselves to be.

MJ: What message does this send to the transgender community?

JS: This memo is sending a clear message to the transgender community that they have no protection and no ability to hold entities accountable if those entities discriminate against them in health care, in education, in housing, or in public accommodations. So whether or not this memo ultimately gets released as a statement of administration policy, it is doing work to chill the trans community’s willingness to go to the government to seek vindication of their rights. The clear message is that these are not enforcement agencies that are going to act to protect vulnerable people from discrimination.

The weight of court authority says that gender-identity-based discrimination is in fact prohibited under existing civil rights laws. For many of those laws, individuals have the right to go directly to court. They do not have to go to the Department of Health and Human Services or the Department of Education to file a complaint. They can file a lawsuit in federal court and ask a judge to make the determination about whether they have been subjected to unlawful discrimination.

If the administration puts its thumb on the scale saying that gender identity discrimination is not covered under existing law and that sex needs to be described in this extraordinarily circumscribed way, that unfortunately could have a trickle-down impact eventually. It’s a potentially very damaging interpretation that is inconsistent with precedent and with the way in which medicine today understands the way in which sex manifests itself.

MJ: How would adopting a definition affect services for transgender people?

JS: When I was at [the Office for Civil Rights], we issued a regulation that gender identity discrimination was covered under Section 1557, which is the nondiscrimination provision of the Affordable Care Act. As a result of that legal determination, medical providers had to treat trans people the same as they treated cisgender people with regard to any medical services.

“Providers could turn trans people away with impunity for any kind of medical service that they sought. If a cardiologist didn’t want to treat a trans person for a heart condition, there would be nothing this person could do.”

Basically, what these positions would be saying is that transgender people have no protection against discrimination in health care based on their gender identity. That would mean that providers could turn trans people away with impunity for any kind of medical service that they sought. If a cardiologist didn’t want to treat a trans person for a heart condition, there would be nothing that this person could do under Section 1557 to hold that cardiologist accountable. To take the position that people who are turned away from care because of their gender identity can seek no relief from a civil rights law that is intended to expand access to care and reduce barriers for marginalized communities is not only a violation of the terms of this law but also the mission of the Department of Health and Human Services.

MJ: How would the definition specifically affect transgender students?

JS: Trans students subject to harassment would not be able to hold students accountable under federal law. Trans students who were barred from restrooms or locker rooms consistent with their gender identity would not be able to challenge their schools. The end product is that you could have students like Gavin Grimm and numerous others who have filed similar claims forced to use restroom facilities that do not match their gender identity without any ability to create relief from that situation. Students who were suspended because of their transgender status would have no way to argue that federal law barred schools from taking those disciplinary actions against them.

“Trans students who were barred from restrooms or locker rooms consistent with their gender identity would not be able to challenge their schools.”

Because there is the right to file independent lawsuits in court, students who are aware of their rights and have the wherewithal to be able to file court complaints could potentially do that and get some relief. But the point of the administrative enforcement mechanism is to basically ensure that people don’t have to go to court to vindicate their rights, and that the federal government will act to ensure that discrimination is remedied and that entities that get federal funds will be barred from discriminating against vulnerable students or employees or people seeking health care.

MJ: How if at all would this hold up if challenged in court?

JS: I think it would be deeply vulnerable to court challenge. I’m quite confident that were the administration to adopt this as the interpretation of these laws, it would be challenged in court as being inconsistent with the underlying law and quite possibly unconstitutional. That obviously would depend on the specifics on what the policies or regulations said, so I can’t tell you that it is clear that particular challenges would be successful.

I anticipate that there will be groups and individuals who will argue strenuously that, with the weight of court authority, the appropriate interpretation of anti-discrimination laws is to include gender-identity discrimination. That’s an interpretation that has been adopted by numerous courts across the country. It would be extremely difficult for this administration to successfully say that their current interpretation of the law is consistent with the understanding of the underlying statutes that have been adopted over numerous years.