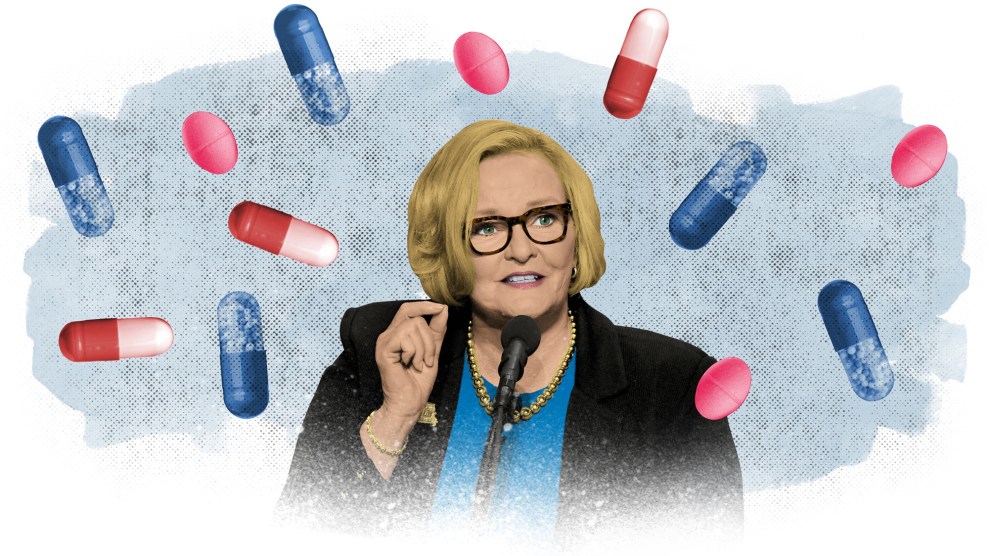 When her elderly mom was dying in the hospital, Claire McCaskill, the Demo­cratic senator now facing a tough reelection fight in Missouri, noticed a disturbing pattern. Betty Anne McCaskill, 84, would seem energetic and upbeat until nurses came to check her pain levels on a 1-to-10 scale. Then she’d moan, “Ten! It’s a 10!”

“She knew that the more she said 10, the more opioids she’d get,” says McCaskill, whose mom died in 2012. “There’s no question my mother was addicted at the end of her life.”

People chat around us in a gilded reception hall outside the Senate floor, their conversations echoing off the marble walls, but McCaskill sits chin on one hand, leaning forward, green eyes unwavering. She talks as if she’s confiding in a good friend, though in reality she’s squeezing in a quick interview between votes. “The other part of the story about my mother,” she says after a pause, “is realizing that younger members of our family were stealing from her.” After some of Betty Anne’s pills went missing, safes were bought and home health aides were monitored. “First there’s the sinking sensation that my mother’s addicted to opioids, combined with this sinking sensation of, ‘Who’s taking them?’” she says. “And then, of course, people started dying everywhere around me in Missouri.”

And they kept on dying. Between 2012 and 2016, Missouri’s opioid overdose death rate jumped more than 70 percent, thanks to compounding waves of painkillers, heroin, and fentanyl. In 2017, drug overdoses claimed the lives of nearly 1,400 Missourians. In town halls—McCaskill often mentions she did 50 in her home state last year—she heard their stories. “It may not be the issue that’s getting covered in Washington, but I know how many Missourians are going to sleep tonight worrying if the phone’s going to ring. And that their child or their sister or their cousin is going to be dead.”

Today, McCaskill leads the most far-reaching congressional investigation into opioid manufacturers and distributors to date. Her team has dug up documents exposing years of deceptive painkiller marketing techniques, millions of dollars that pharmaceutical companies donated to pain management advocacy groups, and a flood of painkillers entering Missouri—260 pills for each resident between 2012 and 2017.

If McCaskill is voted out, says one expert, “I’m not sure anyone else would take it on.”

Some dismiss this work as political maneuvering—preelection talk by one of the nation’s most vulnerable Democratic senators on an issue that everyone can get behind. But supporters counter that President Donald Trump, despite promises to spend “the most money ever” on the opioid crisis, has done next to nothing. His much-publicized declaration of a public health emergency brought no new funding. Repealing the Affordable Care Act, a long-standing goal of the administration, would result in a loss of coverage for some 3 million Americans with substance-­use disorders. Meanwhile, McCaskill has centered the opioid issue in a way few other politicians have, says Adriane Fugh-Berman, a Georgetown pharmacology professor who studies industry influence in medicine. If McCaskill is voted out, she says, “I’m not sure anyone else would take it on.”

McCaskill was born in 1953 in rural Rolla, Missouri, a sleepy town surrounded by farms on the Ozark Plateau. She took to the campaign trail at a young age: On Halloween in 1960, Betty Anne trained her seven-year-old daughter to say, “Trick or treat and vote for JFK!” Betty Anne became the first woman to serve on the Columbia City Council; her husband, Bill, worked as the state insurance commissioner.

For Claire, high school cheerleading and debate club gave way to a political science degree in college, followed by law school at the University of Missouri. She later rose through the ranks in state politics, three kids in tow, from state representative to county prosecutor to state auditor, and then to US senator in 2006. All the while, she made a name for herself as a pragmatic and tough politician, one who took on arsonists, rapists, evasive government agencies, and greedy companies with a vengeance. And charm: “She’s someone who, in the middle of a big fight, will find something funny about it—it’s very disarming,” says Jay Nixon, Missouri’s Democratic governor from 2009 to 2017. But “when she gets her teeth in you, until she’s swallowed some hide, she’s not done.”

McCaskill got a glimpse of the challenges of addiction as Jackson County prosecutor, when in 1993 she helped start one of the nation’s first drug courts, which divert nonviolent drug offenders to treatment rather than prison. “Please don’t make the mistake of assuming that I am a lightweight, liberal, do-gooder woman who doesn’t believe in locking people up,” she said before a Senate Judiciary Committee hearing about drug courts in 1994. “I am not here advocating drug courts as a social worker, but rather as a no-nonsense prosecutor who embraces this model because it works.”

The company’s informal motto, according to one internal document obtained by McCaskill, was “Start ’em high and hope they don’t die.”

In the spring and summer of 2017, as mounting overdoses started to make national headlines, McCaskill sent letters to nine opioid makers and three pharmaceutical distributors requesting information on behalf of the Homeland Security and Governmental Affairs Committee. Drew Pusateri, McCaskill’s communications director, remembers expecting the opioid manufacturers to attract a lot of political scrutiny. “It’s funny looking back on that now,” says Pusateri. “It’s remarkable how lonely this effort has been.”

The findings, released in a series of highly publicized reports over the past year, have been eye-opening. McCaskill’s team revealed that seemingly independent institutions like the Academy of Integrative Pain Management and the American Academy of Pain Medicine accepted millions of dollars from five opioid makers and proceeded to lobby against policies aimed at curbing opioid abuse. (In June, McCaskill introduced legislation that would require pharmaceutical companies to publicly disclose payments to patient advocacy groups and professional societies.)

The team also dug up court documents showing that prescription fentanyl maker Insys trained employees to claim they represented doctors’ offices and to falsify patient diagnoses in order to secure insurance coverage. The most recent report, released in October, found that Insys rewarded sales reps who encouraged physicians to prescribe higher doses of fentanyl. The company’s informal motto, according to one internal document obtained by McCaskill, was “Start ’em high and hope they don’t die.”

The investigation cast a glaring light on opioid makers and distributors, which already face dozens of lawsuits from states and municipalities demanding damages for the epidemic’s strain on the public sector. “Congressional investigations have far more ability to command public and press attention than do lawsuits,” says Keith Humphreys, a Stanford University drug policy expert. “The companies that caused the epidemic often fear that more than they do the piddling settlements they typically pay.”

Simultaneously, the reports have generated much-wanted publicity for McCaskill: Coaxing grieving mothers to tell their stories during roundtables and slamming pharmaceutical executives during hearings make for great press. That’s led some to be skeptical. “I would just raise the question whether this kind of hearing is moving any legislative ball forward—or whether it’s for PR,” says Missouri’s former Republican Sen. John Danforth.

McCaskill often boasts that she pisses off people on both sides of the aisle and appeals not to the folks who watch Fox or MSNBC, but to the Missourians who are sick of politics and watch Dancing With the Stars instead. But she’s also known for being a shrewd politician. In the 2012 election, she ran ads that helped Todd Akin, the ultraconservative candidate who claimed “legitimate rape” didn’t cause pregnancy, win the Republican Senate primary. In the general election, as McCaskill’s pollsters predicted, the state’s moderates veered away from Akin—and toward her.

“I know experience is a bad thing right now in politics.”

McCaskill faces a formidable challenger in Josh Hawley, the state’s 38-year-old attorney general, who boasts a résumé enviable to any ambitious conservative: degrees from Stanford University and Yale Law School, where he was the head of the Federalist Society; a clerkship for Supreme Court Chief Justice John Roberts; an appointment as an associate professor at the University of Missouri Law School.

On the opioid crisis, Hawley’s record is mixed. Last summer he sued three opioid makers, alleging that as “Missouri families and communities suffered from the scourge of opioid abuse, Defendants earned billions in profits as a direct result of the harms they imposed on Missouri.” But then in February he signed on to a lawsuit with 19 other states that aims to take down the Afford­able Care Act, a lifeline for Americans with substance-use disorders.

In the Senate room, McCaskill goes on the offensive when I ask how Hawley might approach the opioid crisis. “I can’t really say—he hasn’t had enough time to get a lot done,” she says. “I know experience is a bad thing right now in politics.”

Is it? Dave Robertson, a political scientist at the University of Missouri-St. Louis, points out that McCaskill is holding her own “in an election where you often expect the result to be a couple of percent apart in a very prominent race.” The opioid epidemic, he adds, is a “golden” issue “from the point of view of politicians”—one that bridges the political divide in a state that went for Trump by more than 18 points. Ultimately, he says, McCaskill has appealed “to the Missourians who care about opioids, who care about being left behind.”