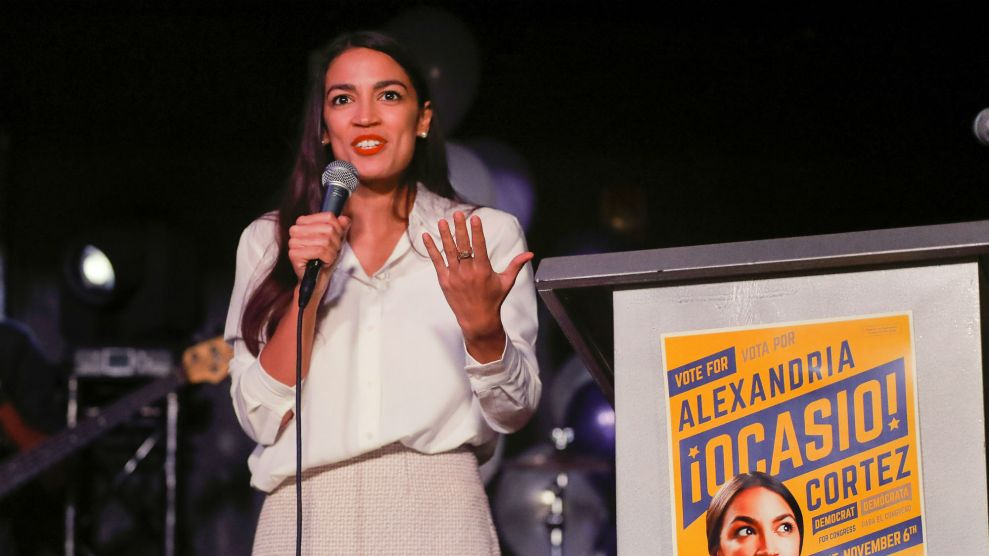 Tuesday’s midterm election results are full of firsts. More than 100 women, an unprecedented number, were elected to the House and Senate as first-time female candidates swept one race after another. In 18 races (some remain to be called), Democratic women flipped formerly Republican House seats, often by beating out male challengers. The night also ushered in a flock of diverse victors, from the first Native American women to be elected to congress, to Texas’s first Latina congresswomen, to the country’s very first female-majority legislature, on the island of Guam.

Here’s a look at some of last night’s historic firsts:

1) Connecticut’s first black woman elected to Congress: Jahana Hayes. A political newcomer, Hayes is a longtime educator who was designated 2016’s National Teacher of the Year. In her campaign in Connecticut’s 5th district against Republican Manny Santos, Hayes didn’t shy away from talking about details of her background that would make her an unconventional representative in the predominantly white and male Congress, including having been raised by her grandmother in public housing in a poor neighborhood, and having a baby at 17.

3) Massachusetts’s first black woman elected to Congress: Ayanna Pressley. As the first African-American woman elected to Boston’s City Council, Pressley, 44, ran unopposed in Massachusetts’s 7th congressional district, following her primary defeat of 10-term incumbent Michael Capuano this summer. In a speech to supporters on Tuesday night, she noted the historic nature of her win: “Can a congresswoman wear her hair in braids? Rock a black leather jacket?” she said, to cheers from the audience.

6) New York’s first black female statewide official: Letitia James. James is no stranger to making electoral history: In 2013, she became the first black woman to win citywide office in New York City when she became public advocate. She won her race on Tuesday, becoming New York’s first black attorney general, with more than 80 percent of the vote. As attorney general, James has promised to crack down on Trump’s “constitutional abuses” and “shady business practices” in New York.

7) Youngest woman elected to Congress: Alexandria Ocasio Cortez. Democrat and Bronx resident Ocasio Cortez catapulted onto the national stage when she beat 10-term incumbent Rep. Joseph Crowley in a summer primary, just months after leaving her job as a bartender. On Tuesday, the former Bernie Sanders campaign organizer sailed to victory in New York’s 14th congressional district, where about half of residents are immigrants.

8) Iowa’s first women elected to the House of Representatives: Cindy Axne and Abby Finkenauer. Democrats Axne and Finkenauer both triumphed over Republican incumbents: Axne took on Rep. David Young in the 3rd congressional district, while Finkenauer defeated Rep. Rod Blum in the state’s 1st district. Before this race, Axne was a newcomer to politics, but had worked in state government on environmental policy under former Iowa governor Chet Culver. The 29-year-old Finkenauer had served in the Iowa legislature since 2015 and on Tuesday also became the second youngest women elected to Congress after Ocasio Cortez.

9) Iowa’s first elected female governor: Kim Reynolds. A Republican, Reynolds served as the lieutenant governor of Iowa from 2011 to 2017. She assumed the post of Iowa governor in May 2017, following Terry Branstad’s departure to serve as ambassador to China. On Tuesday, she officially won the seat she’s held for over a year, in a close race against Democrat and businessman Fred Hubbell. Reynolds is best known for her decision to privatize Medicaid in Iowa, and the approval of the nation’s most restrictive abortion ban, which restricts the procedure in Iowa after a fetal heartbeat is detected, at about six weeks into pregnancy. (The law is temporarily blocked, pending resolution of a lawsuit.)

10) Massachusetts’s first black district attorney: Rachael Rollins. The Democrat and Cambridge-native handily beat her opponent on Tuesday to become the top prosecutor in Boston’s Suffolk County. Rollins, who has served as a prosecutor in the US Attorney’s office, ran on a progressive criminal justice reform platform.

11) Guam’s first female governor and the United States’ first female-majority legislature: Lou Leon Guerrero won the governorship in Guam on Tuesday and celebrated by dancing the electric slide. Along with her, 10 women were elected to Guam’s 15-member legislature, making the island the first US state or territory to ever elect a legislature where women outnumber men.

13) First Latina congresswomen from Texas: Veronica Escobar and Sylvia Garcia. Escobar, a former county commissioner and county judge in El Paso, won the state’s 16th congressional district while Garcia, a current member of the Texas state senate, won the 29th. Both won their races against Republican challengers with large margins.

14) Michigan’s first openly gay person elected to statewide office: Dana Nessel. Nessel, a Democrat, won the Michigan’s attorney general race on Tuesday, flipping a post that had been held by republicans for 16 years. A former prosecutor, she’s known for litigating Deboer v. Snyder, a key case that helped led to the nationwide legalization of gay marriage. She also gained attention for a 2017 #MeToo inspired campaign ad that referred to her as the candidate voters could “trust most not to show you their penis in a professional setting.”

17) Tennessee’s first female senator: Rep. Marsha Blackburn. An eight term congresswoman, Blackburn is a self-identified “card-carrying conservative” on issues like abortion and gun control. She beat out former Tennessee governor Phil Bredesen, a Democrat, after running a campaign that highlighted her alignment with President Donald Trump, who won Tennessee in the 2016 election.

18) New York’s first DREAMer elected to public office: Catalina Cruz. A Democrat and former housing attorney, Cruz came to the United States from Colombia at age 9 without papers; she only gained citizenship after marrying her husband in 2009. On Tuesday, she won her race for New York’s 39th Assembly District, defeating the incumbent Democrat and another candidate, and becoming only the third Dreamer ever to win public office nationwide.

20) Minnesota’s first openly gay member of Congress: Angie Craig. A democrat, Craig beat Republican incumbent Rep. Jason Lewis on Tuesday. Craig, who works in health care policy and has four sons with her wife, ran against Lewis in 2016 as well, but lost by a narrow 2 point margin.

Listen to our journalists explain all the twists and turns of Election Day 2018, and what comes next for America, on this special episode of the Mother Jones Podcast:

We want to hear from you. How are you reacting? Do you have a message for the winners? Let us know by filling out the form below, send us an email at talk@motherjones.com, or leave us a voicemail at (510) 519-MOJO. We may use some of your responses in a follow-up story.