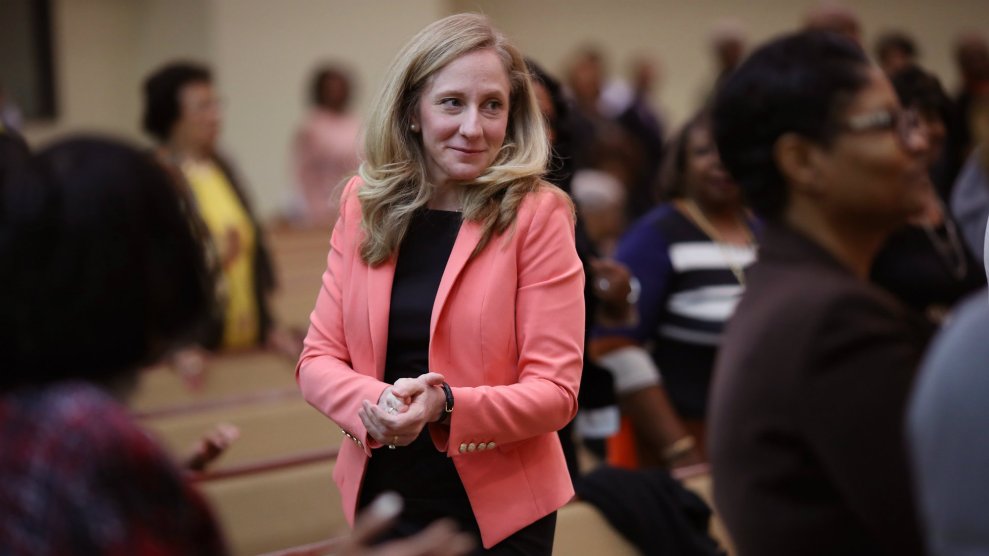 With her victory, Abigail Spanberger will become the first Democrat in more than four decades to represent Virginia's 7th District in Congress. Win McNamee/Getty

Now former CIA agent Abigail Spanberger has defeated Brat and will be the first Democratic representative from Virginia’s 7th District in more than four decades, NBC News and the Cook Political Report confirmed Tuesday night. Brat, once the darling of Breitbart and the insurgent conservative movement, aligns with the far-right House Freedom Caucus.

In recent weeks, pollsters had identified the 7th District, which stretches across central Virginia and includes the suburbs of Richmond, as a potential bellwether for a Democratic “blue wave,” given its large population of college-educated women. “It’s a good early test of how far the ‘suburban revolt’ will take Democrats,” Dave Wasserman of the Cook Political Report told NBC News on Monday.

Since a federal court redrew the boundaries of the district in 2016, a Democratic victory became more possible there. Steve Bannon, Trump’s former adviser, sounded the alarm for Republicans during a recent visit in support of Brat. “If we lose this district we’re going to lose the House of Representatives,” Bannon said in comments reported by the Richmond Times-Dispatch. “There’s no doubt. This is an absolute bellwether of the entire country.”

Democrats did in fact win the House Tuesday night.

Polls showed the race tightening for weeks, with a Christopher Newport University poll released last week that found Spanberger leading by one point. A month earlier, Monmouth University had her up by five points. With support from the national Democratic Party, Spanberger raised more than twice as much as Brat, a former economics professor from Randolph-Macon College. She has been endorsed by former Vice President Joe Biden, Sen. Tim Kaine (D-VA), and a laundry list of state lawmakers. Her campaign, which had showcased her national security bona fides, received an unexpected and unwanted burst of publicity in August when a super PAC aligned with House Republican leadership acquired her application for a federal security clearance. The release of the highly-classified information startled Spanberger, who worked as an intelligence officer overseas for eight years.

“I am proud of my background and my service, and not ashamed of the information I submitted,” she told supporters after the leak was disclosed. “I have nothing to hide in my background. But, as any American in a similar situation would be, I am concerned about my privacy and security.”