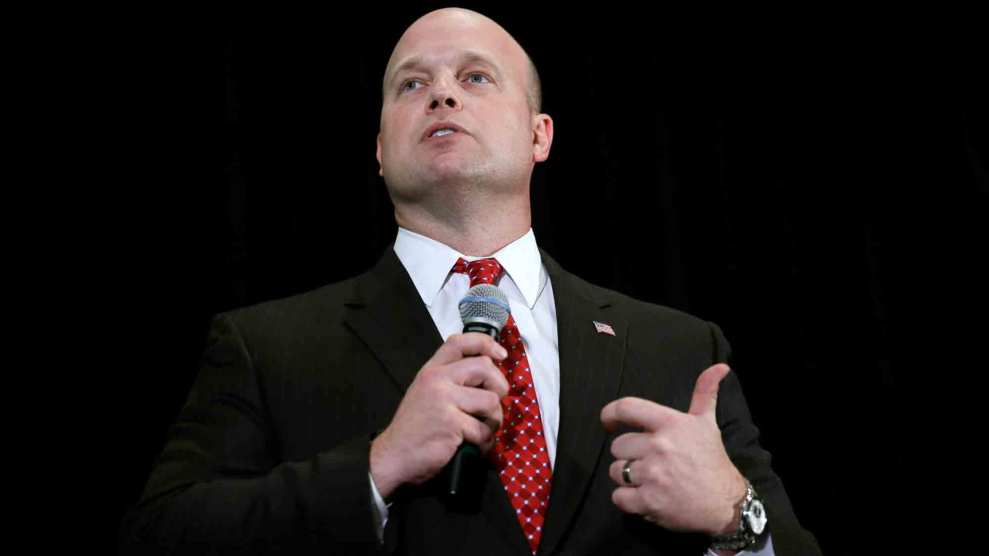 As soon as President Donald Trump installed Matt Whitaker as acting attorney general, media outlets began mining his appearances as a radio and television pundit and discovered he had repeatedly denigrated the Mueller investigation, which he now will be overseeing, and claimed there was no collusion between the Trump campaign and Russia. Mother Jones reported that Whitaker had gone so far as to claim that Trump, as president, had the power to kill the Mueller probe—or any slice of it—for any reason and was immune to any charge of obstruction of justice. All of this has led to critics questioning whether Whitaker ought to recuse himself from the Trump-Russia investigation—which he has declined to do—and speculation that Whitaker would accept a Trump order to crush the Mueller investigation.

Well, there’s more. On one of his 2017 pundit outings, Whittaker even denied that Moscow had attacked the 2016 campaign. During a May 30, 2017, radio show appearance, he declared, “A foreign power attempting to interfere in elections is obviously a very salacious claim, but you know again I have not seen a single fact that would suggest that anything like that has happened. But this doesn’t prevent folks from going on CNN and other media outlets and saying that it happened.”

Note the date. Whitaker said this five months after the US intelligence community had publicly released an assessment that concluded that “Russian President Vladimir Putin ordered an influence campaign in 2016 aimed at the US presidential election.” The report, issued on January 6, 2017, noted, “Russia’s goals were to undermine public faith in the US democratic process, denigrate Secretary [Hillary] Clinton, and harm her electability and potential presidency. We further assess Putin and the Russian Government developed a clear preference for President-elect Trump.” The document said the secret Kremlin scheme blended “covert intelligence operations—such as cyber activity—with overt efforts by Russian Government agencies, state-funded media, third-party intermediaries, and paid social media users or ‘trolls.'” In other words, Moscow attacked the United States with information warfare in part to help Trump win the presidency.

What was Whitaker thinking when he said there was no evidence to back up the assertion that Russia assaulted the election?

Here is a clue. In an interview a week earlier, Whitaker pushed the conspiracy theory that talk of Russia intervention was nothing but a hoax cooked up by the media and Trump’s political enemies: “You have a media that does not like this president or this administration. And it’s trying to—I think it’s successfully now hamstrung him and made him pretty ineffective at least in the near term with a special counsel being appointed to investigate the situation with Russia. I can’t see a single shred of evidence to suggest that anything happened. And so I think you have a media together with a minority party in the Democrats that you know don’t want to see Donald Trump’s vision for America implemented.” Got that? Nothing had happened. It was all a media fabrication concocted to lead to a special counsel investigation that would damage Trump’s presidency.

Whitaker seemed to be ignorant of a basic fact: the Trump-Russia investigation was initiated by the FBI a year earlier in complete secrecy, due to information the bureau had received. Mueller was only appointed to lead the existing inquiry after Trump in May 2017 fired James Comey as FBI director. The media and Trump’s Democratic foes had nothing to do with the origins of the investigation.

As the acting head of the Justice Department, Whitaker now has the responsibility of overseeing the department’s and the FBI’s counterintelligence activities—that is, their actions aimed at thwarting Russian spying against the United States and Moscow’s covert actions aimed at America. That would include any further Kremlin attacks against US democracy. Yet even though the US intelligence community, which includes the FBI, plainly stated Russia had tried to subvert the 2016 election, Whitaker still denied that had happened, which raises questions about his ability to oversee the ongoing Russia investigation. Either Whitaker had not bothered to read the 25-page report or he had discarded its findings in favor of partisan hackery. Whatever the reason, this certainly must be encouraging news for Moscow.