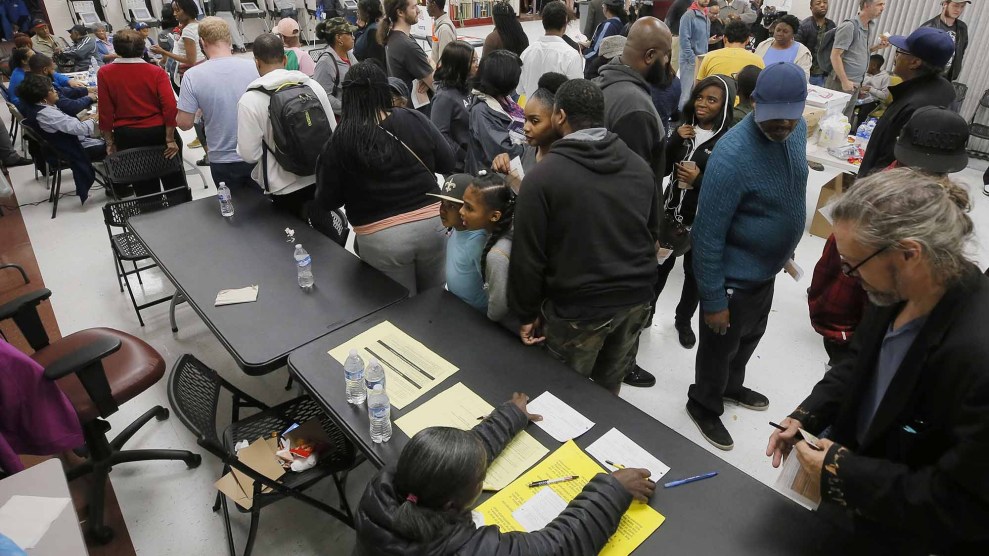 The wait time to vote at the Pittman Park precinct in Atlanta on Election Day was reported to be three hours. The precinct had only three voting machines at the start of the day.Bob Andres/Atlanta Journal-Constitution/TNS via ZUMA

Brian Kemp, Georgia’s secretary of state and Republican candidate for governor, has implemented voter registration policies that caused the state to suspend 53,000 registration applications since last summer. Kemp’s office has insisted that people who submitted those applications will still be able to vote as normal, but on Tuesday, a group monitoring election irregularities has received hundreds of reports from voters in Georgia who say their registrations were suspended and they are being turned away from the polls.

When news of the suspended registrations broke last month, Kemp’s office tried to tamp down the outrage by pointing out that these voters could still cast regular ballots under Georgia law. His spokeswoman expressed indignation that the rejected applications—70 percent of which belonged to African Americans, even though Georgia is just 32 percent black—were being cited as evidence of voter suppression. But Kemp’s office may have failed to adequately educate county election officials about the issue, resulting in some voters being disenfranchised on Election Day. This kind of confusion is exactly what voting rights advocates warned about.

The rejected registrations are due to the state’s “exact match” rule. Georgia election officials, under a process Kemp has vigorously advocated, run every new registration application against the state’s Department of Driver Services database or Social Security Administration records. If an applicant’s information does not precisely match the previously stored information, down to a hyphen in a name, the person’s registration is marked as pending. If the issue is not cleared up within 26 months, the registration becomes invalid.

Because these voters are catalogued as “pending,” their names are not showing up in the poll books alongside other registered voters, according to Sara Henderson, executive director of Common Cause Georgia. Instead, they are on a lengthy list of pending registrations, which at many precincts exists only in a hard copy. As a result, Henderson says, people on the pending list are reporting being turned away at the polls or being forced to cast a provisional ballot.

Common Cause is part of the Election Protection Coalition, a nonpartisan group that runs a hotline for voters experiencing problems and tries to resolve those issues. According to Henderson, the coalition has received hundreds of complaints from Georgia voters on the “pending” list who say they’re being denied regular ballots.

The Georgia secretary of state’s office contested this account. An official there told Mother Jones that pending voters do show up in the regular poll books and that Kemp’s office has tried to educate local officials about the issue. His office received one alert on Election Day of a pending voter being turned away in Gwinnett County, outside Atlanta.

Henderson’s group has its own copy of the pending list and can verify that hundreds people who have contacted the coalition—by calling into the hotline or speaking to the coalition’s poll monitors stationed throughout the state and nationwide—who have been turned away are in fact on the pending list. “We verify that they are actually pending on the list, and then we have our attorneys take it from there,” she says.

Election Day has brought long lines across the metro Atlanta area, where the state’s 16-year-old voting machines are showing signs of wear and sometimes breaking down. Some precincts don’t have enough voting machines, and others lack enough poll workers. Checking the pending list only slows things down further, especially for precincts where the list is a large stack of paper.

News of problems in Georgia, Henderson says, keep rolling in. “We’ve just had two reports of precincts in Fulton County that have run out of provisional ballots, so voters are being turned away and told to come back later,” she says. Fulton County, home to Atlanta, is the state’s most populous county. The precincts, she adds, are close to three historically black colleges in Atlanta, so many African American students are casting ballots there.