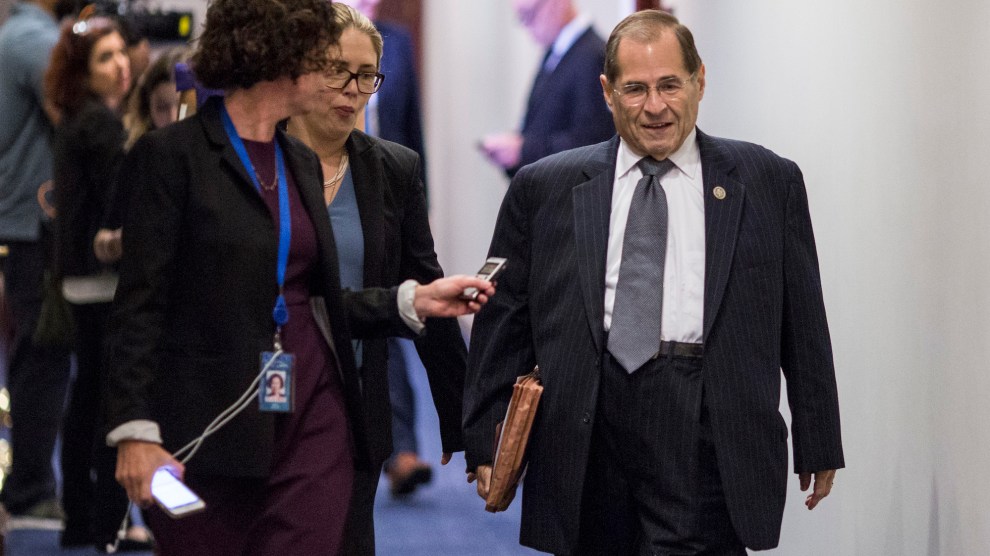 Any Democrats hoping that the party’s big win in last week’s midterm elections would lead to an immediate onslaught of aggressive investigations into President Donald Trump’s actions—or even impeachment proceedings against him—got a reality check on Sunday. The top two incoming Democratic chairmen who will gain sweeping subpoena power both struck a cautious note and emphasized that they are not rushing to pick fights with the president.

Rep. Jerrold Nadler (D-N.Y.), who is set to become chairman of House Judiciary Committee in January, said on ABC’s This Week that he will not launch any immediate effort to impeach Trump. “We’re far from that right now,” Nadler told host George Stephanopoulos.

Rep. Elijah Cummings (D-Md.), who will gain far-reaching investigative power as head of the House Oversight and Government Reform Committee, likewise downplayed his plans to take on Trump. Cummings said he will investigate responsibly. “I’m not going to be handing out subpoenas like somebody’s handing out candy on Halloween,” Cummings told Stephanopoulos. “If I have to use them, they will be used in a methodical way, and it must be in the public interest.”

Trump threatened Wednesday to take a “warlike posture” if Democrats investigate him. “I’m not one to war with anyone,” Cummings said, promising to provide what he said Americans voted for on Tuesday: “accountability with regard to this president.”

Nadler said his top priority is to protect Special Counsel Robert Mueller’s investigation into Trump’s ties with Russia. He said the “very first witness” he calls before the Judiciary Committee will be Matthew Whitaker, whom Trump tapped on Wednesday as acting head of the Justice Department after he forced the resignation of Attorney General Jeff Sessions. Before joining the department as Sessions’ chief of staff, Whitaker had criticized the Mueller probe and even interviewed for a job as a lawyer defending Trump against the probe, the New York Times reported on Saturday.

Nadler has raised the prospect of investigating Supreme Court Justice Brett Kavanaugh, who has been accused of perjuring himself in statements he made during his Senate Judiciary Committee testimony in September. But the congressman indicated on Sunday that any Judiciary investigation he launches will be limited to reviewing the limited FBI probe into allegations that Kavanaugh sexually assaulted women during high school and college.

“There was not a complete investigation,” Nadler said. “We have to look into that, with the view that future FBI investigations are not subject to the same kind of White House interference and can be relied upon.”