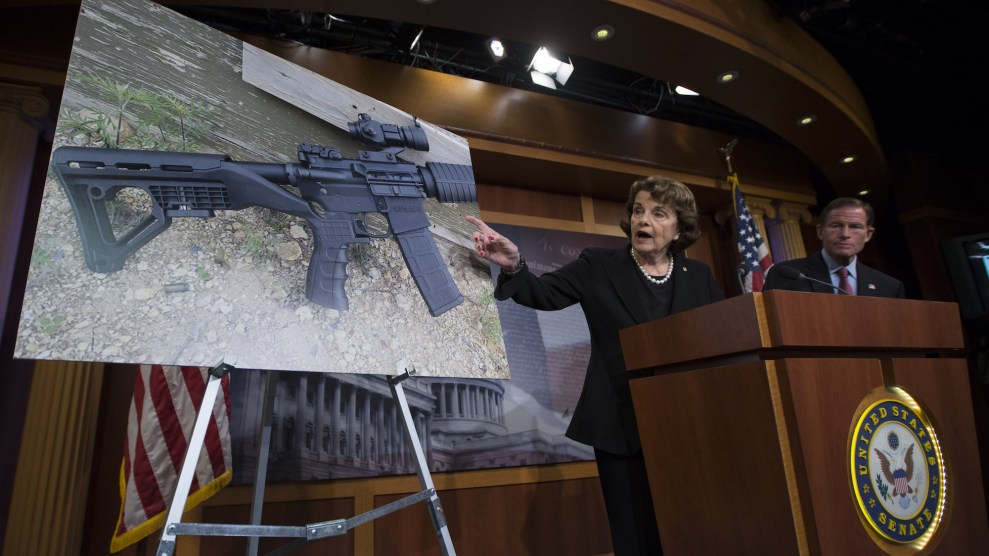 The Bureau of Alcohol, Tobacco Firearms and Explosives will soon ban bump stocks, appliances that enable semi-automatic weapons to behave like machine guns, according to late breaking news last night from CNN. Gun reform activists are cautiously celebrating the long-awaited change as a victory against the device that was used in the deadliest mass shooting in US history at a music festival in Las Vegas in 2017. But they worry the ban may be subject to legal challenges that delay its implementation and are cautious in giving it too much importance within the broader priorities of their movement.

The ban on the devices has been a long time coming but gained greater momentum after the Las Vegas shooting, when the gunman added bump stocks to the weapons that killed 58 people. After the February school shooting in Parkland, Florida—a massacre that did not involve bump stocks—President Trump directed the Justice Department to propose a rule to ban the devices. At the end of March, Attorney General Jeff Sessions announced that ATF would make a rule change to expand the definition of “machine gun”—banned since 1986 under the Firearm Owners’ Protection Act—to include bump stocks.

“Vegas was the 9-11 of gun crimes, and you would have expected there would be swift action, but there wasn’t.”

“Vegas was the 9-11 of gun crimes, and you would have expected there would be swift action, but there wasn’t,” David Chipman, a former ATF special agent and senior policy advisor at gun reform group Giffords, tells Mother Jones. “This whole process is going on so members of Congress don’t have to be on the record taking action.”

The rule change, which is expected to be handed down before the end of the year, is taking place after eight-months of a rulemaking procedure that included a lengthy public comment period, during which gun reform groups mobilized their supporters to submit tens of thousands of notes in favor of the ban. A swifter and more straightforward solution would have been legislative action, something ATF acting director Thomas E. Brandon said himself during a hearing on the subject earlier this year. Lawmakers of both parties introduced bills in the House and Senate to ban not only bump stocks but any device that increased a semi-automatic weapon’s rate of fire—a rare showing of bipartisanship on a typically polarizing subject. But Republican congressional leadership wouldn’t bring the bills up for a vote.

Gun violence prevention activists are pleased that the long-awaited rule change will soon occur but see shortcomings in the regulatory route. Lindsay Nichols, the federal policy director at Giffords, tells Mother Jones that she would have preferred to see a broader category of devices that increase firing speed, like Hell-fire triggers, which allows shooters to pull triggers faster, included in the ban. This is another difference between the new DOJ rule and some of the proposals put forth in Congress.

Nichols also worries about the legal challenges that could stymie the implementation of the rule. While gun control laws passed by state or federal legislatures often face constitutional challenges, regulatory changes are often vulnerable to procedural complaints, such as whether the federal agency faithfully adhered to the rulemaking process, or whether Congress has vested that agency with the authority to make the change. The Firearm Owners’ Protection Act of 1986  constrained the authority of ATF, requiring it to regulate only with Congressional approval. “It’s had a chilling effect on ATF, so their changes have had to be very narrow,” Nichols explains.

Should a suit arise, though, it likely won’t come from the gun violence prevention movement’s usual foe. The National Rifle Association actually endorsed restrictions on the devices following the Las Vegas massacre—though its leaders wanted any changes to filter through ATF, not Congress. Chipman said that opposition to the regulatory shift may still come from Gun Owners of America, which has opposed the bump stock ban, or manufacturers of these devices.

Of greater concern to gun reform advocates, however, is the fact that a bump stock ban only addresses a relatively small corner of the policy landscape these activists would like to see change. After all, most mass shooters do not use bump stocks. In the next session of Congress, national gun reform organizations have said they’ll remain focused on expanding background checks and implementing red flag laws—measures that are much more likely to pass the Democratically-controlled House than the GOP-held Senate.