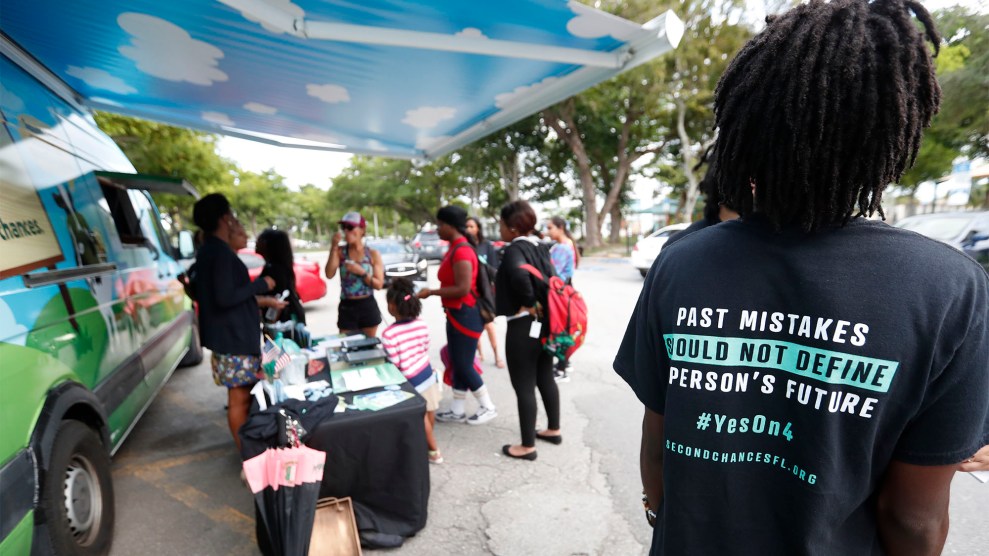 People gather around a Ben & Jerry's "Yes on 4" truck to learn about Amendment 4 in Miami. Wilfredo Lee/AP

In a huge victory for voting rights, Florida voters overwhelmingly approved a ballot initiative on Tuesday that could restore voting rights to as many as 1.4 million ex-felons in the state. It received about 64 percent of the vote with most votes counted, clearing the 60 percent threshold needed to pass.

Amendment 4, as it was called on the ballot, automatically restores voting rights to people with felony records who have completed their full sentences, except those convicted of murder or a sexual offense. Florida is one of only four states that prevent ex-felons from voting even after they’ve paid their debt to society. This felon disenfranchisement law, which dates back to the Jim Crow era, blocks 10 percent of Floridians from voting, including one in five African Americans. Amendment 4 repeals this law and could lead to the largest increase in new voters in the state since the passage of the Voting Rights Act of 1965.

A huge and unlikely coalition supported the ballot initiative, ranging from the American Civil Liberties Union to the Christian Coalition to the Koch brothers’ political network. “We are fighting just as hard for that person that wishes he could vote for Donald Trump as that person who wanted to vote for Barack Obama or Hillary Clinton,” Desmond Meade, an ex-felon stripped of his voting rights who leads the Florida Rights Restoration Coalition, told me when I visited Florida in August. “We don’t care about how a person may vote. What we care about is that they have the ability to vote. That is our compass.”

The passage of Amendment 4 was particularly remarkable given that Florida hasn’t elected a Democratic governor in nearly 20 years. According to polls, a majority of Republicans in Florida supported the initiative even as their party invested heavily in making it harder to vote nationwide.

“We’re challenging the notion that only certain people care about voting rights,” Faiz Shakir, the national political director of the ACLU, which put more than $5 million behind Amendment 4, told me this fall. “Building a massive coalition across the ideological spectrum would send the most resounding message in a state like Florida: What you thought possible was totally wrong.”

The political impact of Amendment 4 will depend on how many of the newly enfranchised ex-felons register to vote and turn out to cast ballots. But there are signs Amendment 4 could give a big boost to Democrats in one of the country’s most important swing states. Of the 40,000 ex-felons who were granted clemency under Gov. Charlie Crist in 2007 and registered to vote, 59 percent registered as Democrats. And one academic study showed that Al Gore would have defeated George W. Bush in 2000 by up to 60,000 votes in Florida if not for the felon disenfranchisement law.

Regardless of the political impact, the passage of Amendment 4 marks a huge expansion of voting rights that could reverberate in other states. The campaign to pass Amendment 4 comes amid a broader push by Democrats to reverse some of the widespread voting restrictions Republicans have implemented since 2010. Fourteen states, including red ones like Alaska, have adopted automatic voter registration in recent years.

On Tuesday, voters also weighed in on ballot initiatives in several other states that will make voter registration easier or draw legislative districts in a nonpartisan way. “We’ve been playing on defense for ages on voter ID laws and all manner of voting restrictions,” Shakir told me earlier this year. “One of the major storylines of 2018 will be: This is the year we went on offense and expanded voting participation.”

For more on Amendment 4, read my story in the November/December issue of Mother Jones, “Inside the Unlikely Movement That Could Restore Voting Rights to 1.4 Million Floridians.”