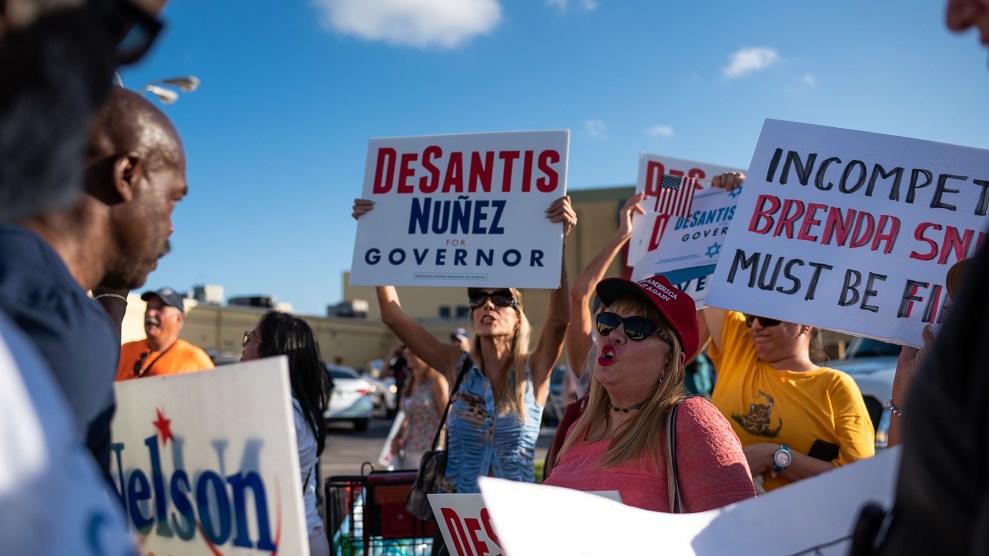 Republican and Democratic protesters demonstrate outside the Supervisor of Elections office in Broward County, Florida, on November 9.Emilee Mcgovern/SOPA Images via ZUMA

The machine recount currently underway in Florida is a cakewalk compared to what will unfold here in Broward County when the hand recount begins. Machines are currently tabulating every ballot, and the results will remain unknown until Thursday afternoon, when they are transmitted to the Florida secretary of state. That’s when the manual recount will begin—along with the bitter fights over thousands of individual ballots.

Broward County is ground zero for the Florida recount in the US Senate race between incumbent Democrat Bill Nelson and Republican Gov. Rick Scott. This is where there are the most “undervotes” in the Senate race—ballots that registered a vote in the governor’s race and other top races but not in the Senate race. Nelson currently trails Scott by 12,562 votes out of more than 8 million cast, and if he’s going to catch up, it’ll likely be from undervotes in Broward County where voters tried to cast their ballots for Nelson but the machines failed to detect a vote for him. According to an analysis by the Tampa Bay Times, there could be as many as 125,000 votes recounted by hand statewide in the Senate race.

When the machine recount concludes, any race whose margin is .25 percent or less will immediately begin a manual recount. The only ballots that will be recounted by hand will be those marked as undervotes or “overvotes,” where the voter selected more than one candidate in a race. Results of the manual recount will be due on at noon on Sunday, but that may not be enough time for the state’s largest counties, which are more Democratic and likely to have the highest number of contested ballots. The Nelson campaign filed a federal lawsuit on Tuesday to extend the deadline.

Once the manual recount begins at the Broward County election headquarters, a large facility in a suburban strip mall, hundreds of volunteers, including attorneys, will fill between 100 and 150 long tables. An equal number of representatives from each party will be at each table. One by one, they will go over the contested ballots. If the two sides can’t agree on the voter’s intent on a ballot, that ballot gets brought before the canvassing board to make the final call. The canvassing board proceedings, where lawyers will be arguing for a reading favorable to their candidate, will take place in public, with reporters watching.

This is an example of an overvote. According to Mike Bennett, Manatee County Supervisor of Elections, this is one of the ballots the machine flagged as having voted for two candidates in the same race. A ballot like this would be processed in a manual recount ⁦@BN9⁩ pic.twitter.com/1q9GRUN3fI

As the machine recount continues today, the two sides are making preparations for the hand recount, including recruiting and training volunteers and working out the logistics of the entire operation, from where to send certain people to who will provide lunch.

As the lead recount lawyer for Senator Nelson, I need your help! If you are a lawyer, please sign up. Otherwise, please share. https://t.co/rP57TVXYQt

Facing a deficit, the Nelson campaign is looking to ensure that as many ballots as possible are tallied in the hand recount. On Tuesday, the campaign and the Senate Democrats’ campaign arm filed a lawsuit in federal court in Tallahassee to force the secretary of state, a Scott appointee named Ken Detzner, to allow canvassing boards to accept certain types of ballots that would otherwise be rejected. According to the lawsuit, Detzner promulgated rules that require canvassing boards to reject a ballot if a voter used different methods to select different candidates—for example, circling one choice but filling in the bubble next to another. The lawsuit says this rule will disenfranchise some Florida voters, particularly “language minorities and those with limited literacy.”

The lawsuit also challenges a Detzner regulation that does not allow canvassing boards to approve ballots where a voter has crossed out one choice and filled in another if the voter did not also write in clarifying language such as “this one” or “wrong” or “yes.” The Nelson campaign argues that crossing out one answer and filling in another is indication enough of intent. “These unconstitutional ballot-counting rules subject Florida voters to disparate treatment and arbitrary disenfranchisement,” Nelson’s lawyers state.

The judge in this case, Mark Walker, scheduled a first hearing for Wednesday morning and is likely to move quickly ahead of the manual recount. The case is a preview of the kinds of battles that will play out over thousands of ballots across the state, as canvassing boards ultimately decide voter intent on a case-by-case basis—and perhaps next senator from Florida.