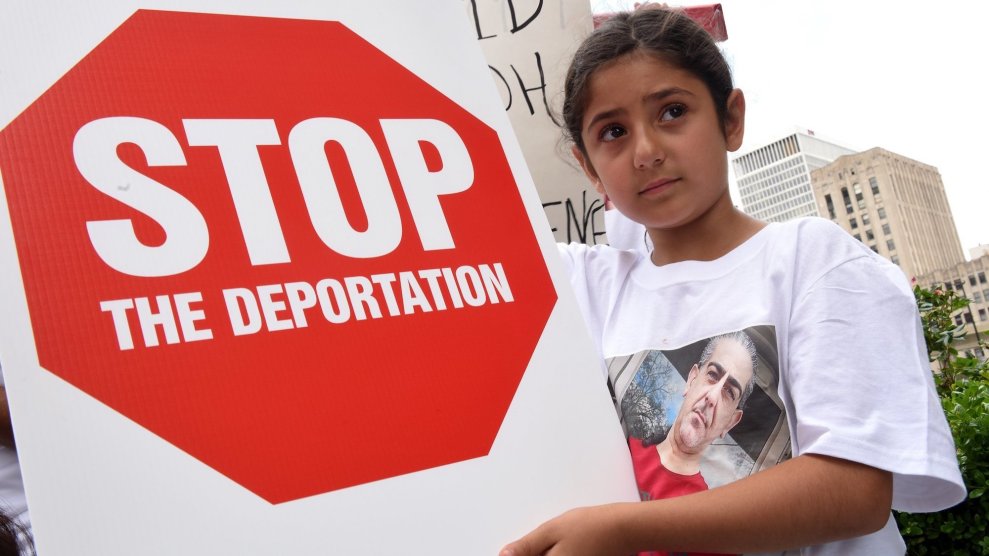 Eight-year-old Khloe Marogi wears a t-shirt with her detained father's photo on it at a June 2017 rally in Detroit to protest the recent Immigration and Customs Enforcement raids in which 114 Iraqi nationals in metro Detroit were detained and are facing deportation.Tanya Moutzalias/AP

A federal judge ordered the Trump administration on Tuesday to release Iraqis facing deportation who have been detained for more than six months, slamming the government for making false claims in order to justify keeping the Iraqis in detention.

A 2001 Supreme Court decision blocks the government from detaining immigrants indefinitely if they cannot be deported. As Mother Jones reported in October, internal emails and memos obtained by the American Civil Liberties of Michigan revealed that US Immigration and Customs Enforcement officials misled the judge in the case, Mark Goldsmith, by telling him that the administration had reached a nonexistent agreement under which Iraq would accept deportees after decades of refusals. Now Goldsmith is ordering that Iraqis who have been detained more than six months be released within 30 days.

Goldsmith wrote in his preliminary injunction that “the Government has acted ignobly in this case, by failing to comply with court orders, submitting demonstrably false declarations of Government officials, and otherwise violating its litigation obligations.” Margo Schlanger, a law professor at the University of Michigan who is helping represent the Iraqi immigrants, says about 100 Iraqis have been detained for more than six months. Few of the Iraqis arrested by ICE under President Donald Trump—some of whom were born in refugee camps and have never been to Iraq—want to go to Iraq.

Fifteen years after the US invasion, Iraq remains a dangerous place. The State Department warns on its website, “Do not travel to Iraq due to terrorism and armed conflict.” Many of the detainees are Chaldean Catholics who face potential persecution if they are deported.

Goldsmith’s decision allows the government to argue against the release of specific individuals if it has a “strong special justification,” but it will be up to Goldsmith to decide whether that justification is valid. Iraqis who have been detained for fewer than six months will also have to be released within 30 days of hitting the six-month mark established in Zadvydas v. Davis, the 2001 Supreme Court ruling. The government does not need to release Iraqis whom it can legally deport within 30 days.

Miriam Aukerman, the ACLU’s lead attorney in the case, said in a statement, “ICE thought it could get away with lying to a federal judge.” She added, “Today, Judge Goldsmith made it clear that ICE is not above the law.”

For months, the Trump administration blocked the ACLU from obtaining the documents that ultimately proved ICE misled Goldsmith. But the government was forced to turn over the documents earlier this year, and its deception became clear when they were unsealed in late October. Goldsmith criticized the “glacial pace” at which the government provided documents to the ACLU. The detainees, he wrote, “should not be made to languish in detention while the Government puts this case on the back burners.”

“You don’t get to play fast and loose in federal court,” Schlanger says. She stresses that Goldsmith was not looking to “slam” the government in the case. “This was a judge who gave [ICE] absolutely every opportunity to explain to him what was going on, to give him the evidence, to provide the discovery,” Schlanger says. “And they abused that system.”

Goldsmith concluded his decision by highlighting the human cost of the government’s deception. “Families have been shattered,” he wrote. He added that the harm to “people who are ostensibly not being punished for criminal activity” is “intolerable and ongoing.”

Read the full decision below.