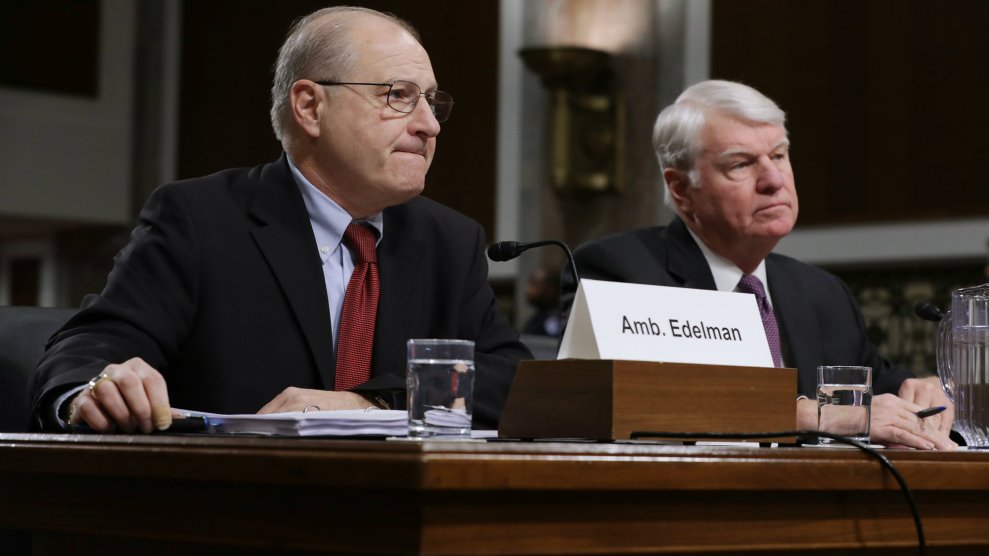 The release of a landmark, independent assessment of the Pentagon’s national defense strategy earlier this month called for a stark change in the way America confronts global powers like Russia and China. But as a policy recommendation, the report by the bipartisan National Defense Strategy Commission, echoed many of the same pleas made by Defense Department officials for decades: boosting defense spending for an indeterminate reason in order to counter an undefined threat.

As part of last year’s final defense budget, Congress authorized a 12-member group, composed of appointees selected by top Republican and Democratic lawmakers, to review the national defense strategy then in development at the Pentagon. To a certain extent, the report reflected the strategy outlined by Defense Secretary James Mattis in January. Two of the report’s main authors addressed lawmakers Tuesday to defend its findings and use them as evidence for increasing the military budget.

Eric Edelman, the former US ambassador to Turkey and Finland, along with retired Adm. Gary Roughead told members of the Senate Armed Services Committee that spending on national security should not dip below $733 billion, only a 2.37 percent increase from current funding levels. Edelman, who also served in the Pentagon during George W. Bush’s administration, said he was troubled by Trump administration officials telling him that the defense budget may be flat in future years. The $733 billion figure, he said, ought to be a “floor, not a ceiling.”

This wording should be familiar to those who have followed the regular debates about the military budget. Republicans used similar language two years ago to describe Barack Obama’s proposal to budget less than $600 billion for the Pentagon in fiscal year 2017.

I suspect we're going to hear "floor, not a ceiling" a lot from Republicans next year. So pretty much like the first half of 2016.

The similarity was not lost on Sen. Elizabeth Warren (D-Mass.), who used her brief appearance near the end of the hearing to blast the commission leaders for their lack of specificity when requesting more funds. “It’s not really a strategy to just keep saying ‘more,’ ” she said. Surprisingly, Donald Trump agrees.  He demanded in October that the Pentagon cut spending in its next budget request to $700 billion.

“It’s not really a strategy to just keep saying ‘more.'”

These statements by their commander-in-chief were likely a serious blow to officials who were expecting to make the expensive technological improvements outlined in Mattis’ strategy document and preparing to devote anywhere from $3-5 billion on the Space Force. Deputy Defense Secretary Patrick Shanahan vowed to submit two budget requests, including one that incorporates Trump’s proposal, but warned the White House of the opportunity cost of slimmer budgets. “What I want the president to understand when we bring forward this budget is: what are those tradeoffs?” Shanahan told reporters at the Pentagon last week.

Rep. Adam Smith (D-Wash.), who is set to become the next chair of the House Armed Services Committee, has indicated that defense budgets should decrease in the future. “It is my firm belief that, given the $22 trillion debt and trillion-dollar deficit produced by the Republicans’ tax cuts, the Pentagon is going to have less money in the future,” he told McClatchy after Democrats won control of the House earlier this month. “We need to scrub the defense budget to better reflect that reality.”

During Tuesday’s hearing, despite some limited pushback from Warren and a thin roster of Democratic senators—lame duck Sens. Bill Nelson (D-Fla.) and Joe Donnelly (D-Ind.) stopped by briefly but had no questions—the authors urged lawmakers to boost defense spending by at least 3 to 5 percent. In addition to modernized weaponry and cyber capabilities, the authors called for “new operational concepts”—in other words, new ideas—”that expand U.S. options and constrain those of China, Russia, and other actors.”

The report’s grim portrait of America’s ability to deter global rivals will no doubt reassure budget hawks who were blindsided by Trump’s sudden desire to rein in deficit spending. It may also provide the fuel Republicans need to secure more dollars for the Pentagon from a reluctant president.

To that end, Sen. Jon Kyle (R-Ariz.) earlier this month called the report a “valuable messaging document” in an interview with Defense News. “My hope is that the bipartisan nature of this commission will enable Democrats who are in doubt to come to the right conclusions, and that the intelligent Democratic members of the commission can perhaps persuade members who don’t have the facts on the need to do this,” he said.

In no uncertain terms, the report stated that it would be impossible to maintain American dominance on the world stage while decreasing defense spending. And, in a blow to Democrats who have voiced a desire to reduce the president’s nuclear arsenal, the report strenuously rejected any plan to offset a cut in spending on nuclear power with an investment in conventional forces. “Sustained and predictable funding is equally important to sustaining the portion of the defense industrial base devoted to nuclear matters,” the commissioners wrote.

The commissioners’ greatest concern appeared to be repeating what happened during Obama’s second term, when a period of divided government led to persistent budget gridlock. This uncertainty posed a major impediment to increasing the “size, readiness, and future capabilities of the armed forces,” they wrote.

“The failure to pass a predictable budget has done more to harm readiness than anything else that has happened,” said Adm. Gary Roughead, former chief of naval operations and the commission’s other co-chair.

The emphasis on defense spending at the hearing largely evaded a relevant, recent development: the passage of a $1.5 trillion tax cut in December. Only Sen. Tim Kaine (D-Va.) drew attention to the projected $1.9 trillion the cut would add to the federal deficit. “We need to align our actions with our words,” he said.

Upon the report’s publication two weeks ago, commentators drew attention to its skeptical portrait of America’s progress at deterring global rivals, and its withering criticism of the dominant role military officers have in shaping national security policy at the expense of civilians. “Constructive approaches to any of the foregoing issues must be rooted in healthy civil-military relations. Yet civilian voices have been relatively muted on issues at the center of U.S. defense and national security policy, undermining the concept of civilian control,” the report notes.

Pentagon spokesperson Johnny Michael called the report a “call to action” in a statement after its release, and said the Defense Department would consider its recommendations. “The commission’s description of the complexity of the current security environment—in which strategic competition is occurring across domains and rapid technological developments are changing the character of warfare—is also a stark reminder of the gravity of these issues,” he said.

Whether House Democrats will sign off on a defense budget that increases spending is still unclear, but if history is any guide, lawmakers will approve an increase just as they did when Democrats held majorities in both chambers of Congress during the early part of Obama’s first term.