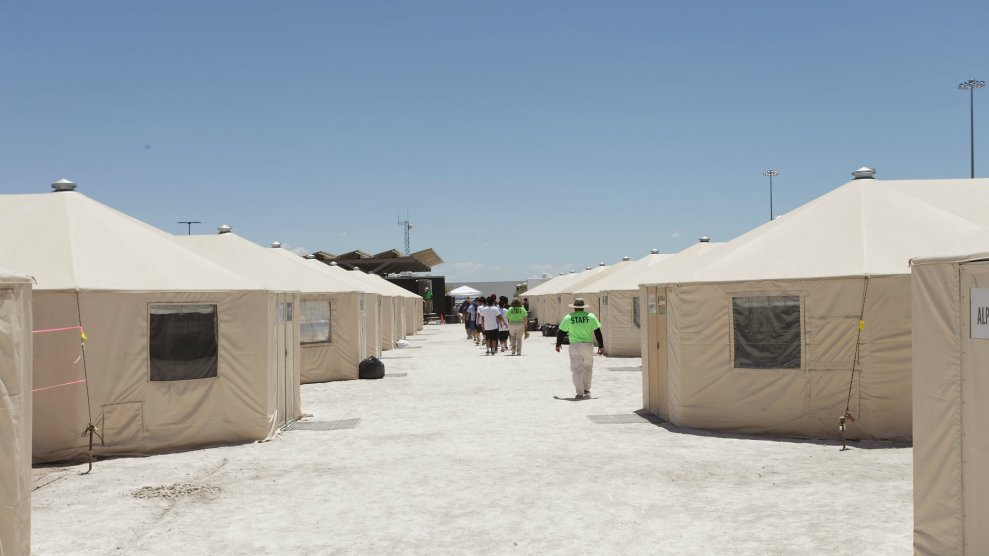 The Tornillo facility in Texas.US Department of Health and Human Services/ZUMA Wire

A “tent city” for migrant children in Texas has been operating for months with staff who never completed the required FBI background checks, according to a federal watchdog memo released Tuesday afternoon. The facility, officially known as the Tornillo influx care facility, was opened in June at the height of the Trump administration’s family separation crisis. It was initially supposed to remain open for 30 days and accommodate 1,800 unaccompanied minors. But as the crisis at the border continued, the Department of Health and Human Services announced that it would triple the size of the facility and keep it open through the rest of the year.

The new report, from the department’s Office of the Inspector General, highlights two main areas of concern. First, it found that BCFS Health and Human Services, a nonprofit which operates Tornillo, wasn’t conducting the minimum background checks on employees that are required by the Office of Refugee Resettlement. This included an FBI fingerprint background check, as well as a “child abuse and neglect” (CA/N) check, which shows whether someone has a record of “substantiated maltreatment” of a child. Instead, Tornillo was using a private contractor, which would not have had as much access to information as an FBI background check.

According to the report, the then director of the Office of Refugee Resettlement (ORR), Scott Lloyd—whose controversial actions my colleague Hannah Levintova has written about repeatedly—had granted the facility a waiver on the CA/N check, because of how quickly the facility needed to be set up, and because he believed the facility was already conducting FBI background checks. (It was not.)

ORR is now working with BCFS Health and Human Services to conduct the fingerprint background checks on its staff, following communication with the inspector general about the findings.

The report also chronicled another major concern: that Tornillo may not be providing adequate mental health care for the children at the site. As of October, the facility had one clinician for every 55 children, which the IG called “especially worrisome” considering the growing number of children at the site and their likelihood of having experienced substantial trauma. ORR’s standards generally require shelters to provide one clinician per 12 children, and while emergency facilities like Tornillo do not have to comply with these standards, the report noted that it only had a budget for one clinician per 100 children—meaning that the situation there could get even worse. “We are concerned that both the current staffing ratio and the ORR allowable budgeted staffing ratio are dangerously low,” the report stated.

The IG called the issues “serious safety and health vulnerabilities” that could pose “substantial risk” to the children at the facility. ORR will have 30 days to post an official response.

These aren’t the only issues plaguing Tornillo. The Associated Press published an investigation into the facility, also on Tuesday, that details its ballooning costs to taxpayers—and the likelihood that it will remain open until 2020. Read the full report here.