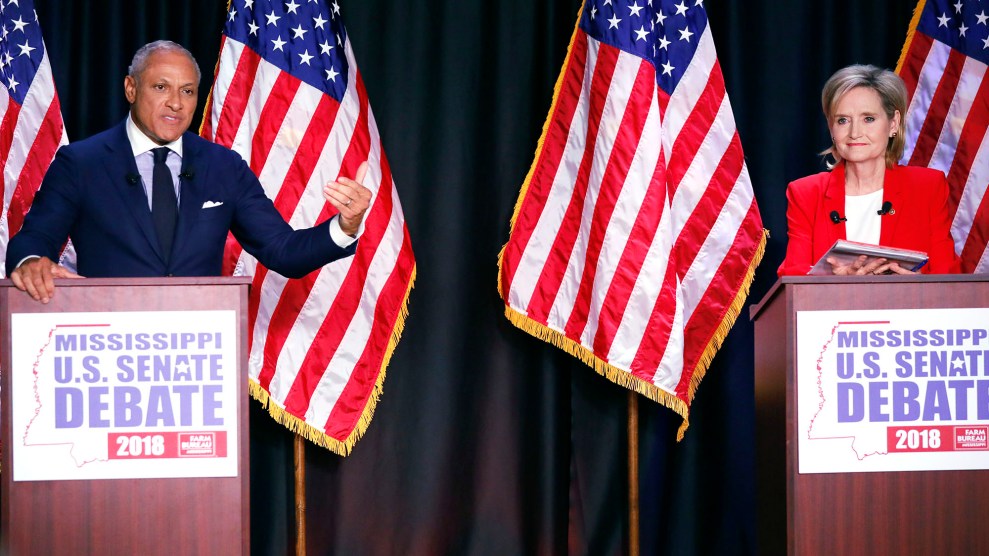 Update, November 27, 4:30 p.m.: A federal judge on Tuesday denied the request to accept absentee ballots that arrived after Monday’s 5 p.m. deadline in Mississippi’s runoff election Tuesday. Though Judge Daniel Jordan III acknowledged that Mississippi’s deadline for requesting, receiving, and returning an absentee ballot “is tight—if not impossible—for some voters,” he concluded that it is too late in the process to extend the deadline.

Ahead of Mississippi’s runoff election for US Senate on Tuesday, a national civil rights group has sued the state’s governor and top election officials over stringent absentee ballot requirements that make it impossible for many voters to have their ballots counted.

Republican incumbent Cindy Hyde-Smith and Democrat Mike Espy both failed to secure a majority in the November 6 election, triggering a runoff. But Mississippi county election officials didn’t begin sending absentee ballots out until Saturday, November 17, according to the lawsuit from the Lawyers’ Committee for Civil Rights Under Law. Many out-of-state voters received those ballots around Thanksgiving. Under Mississippi law, an absentee ballot must be notarized and received by county election officials by 5 p.m. on the day before Election Day. A voter who didn’t receive his ballot until November 23, the day after Thanksgiving, would have had just three days—and one weekday—to get his ballot notarized, put it in the mail, and have it delivered to the county office.

“Mississippi’s absentee ballot procedures stand out as some of the most burdensome in this country,” lawyers with the Lawyers’ Committee argued in their complaint, filed in federal court in Mississippi last week.* The burdens, they said, go so far as to violate the Constitution.

The Lawyers Committee is representing three Mississippi voters who requested absentee ballots but did not receive them by November 20, making it nearly impossible to get them back in time to be counted. The lawsuit asks a federal judge to force Mississippi officials to count all absentee ballots that are postmarked by Election Day, so that voters whose ballots do not reach officials by Monday’s arrive-by deadline can still have a say in the election.

Voting by mail in Mississippi is uniquely onerous. Many states allow anyone to vote absentee in order to avoid going to the polls, but in Mississippi, only some voters qualify to vote absentee, including voters who will be temporarily out of town or who attend school in another county or state. These voters must request an absentee ballot from their county’s circuit clerk, in person or by mail on an official paper application. For every new election, a new request must be made, including for the runoff. That means that a college student who wants to vote absentee must first request an absentee ballot application, which must be filled out, notarized, and mailed back. Then the ballot must be also notarized before it can be sent back. Notaries can be difficult to find, particularly on a holiday weekend, and they sometimes charge for the services, even though it’s unconstitutional for states to require people to pay in order to vote. For an absentee voter to cast a ballot in Mississippi’s general and runoff elections this year, he or she would have had to notarize and mail four separate documents to the county clerk’s office.

“This burdensome process is difficult to navigate in the best of circumstances,” the Lawyers’ Committee stated in its complaint. “When compounding circumstances—such as an inability to pay for or find notary services, or a delay in postal delivery—add further complications, it becomes impossible.”

In the lawsuit, the Lawyers’ Committee asks a federal judge to loosen some of these requirements so that voters can download and electronically submit an absentee application form for future elections. It also seeks to relax the notary requirements and to force the secretary of state and governor to update the state’s website to make absentee voting instructions clearer.

Correction: An earlier version of this article misstated the date when the lawsuit was filed.