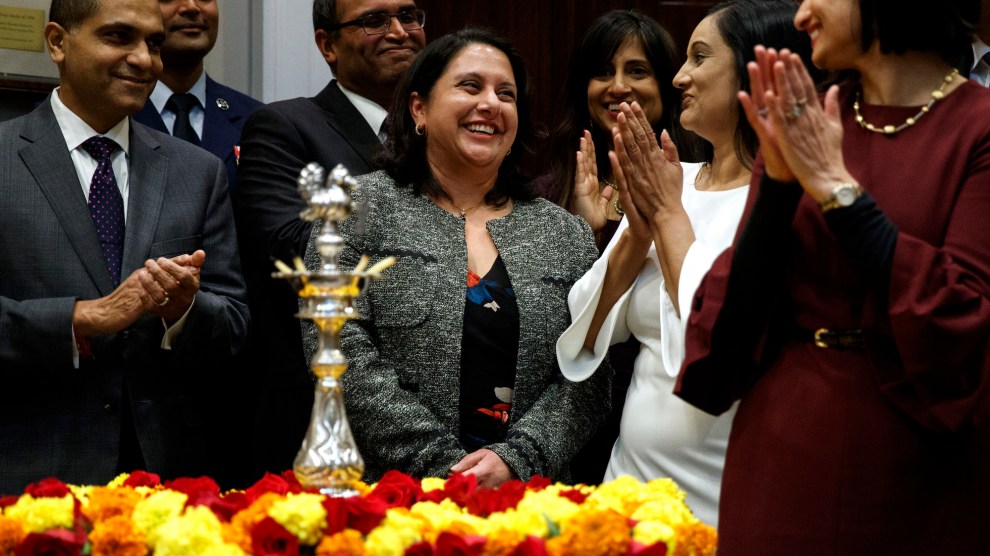 Neomi Rao smiles as President Donald Trump announces his intention to nominate her to fill Brett Kavanaugh's seat on the DC Circuit Court of Appeals on November 13. Evan Vucci/AP

President Donald Trump’s judicial nominees have had some unusual hobbies and pet causes. Alabama District Court nominee Brett Talley is an amateur ghost-hunter and horror novelist. (The White House withdrew his nomination after it was revealed that he’d blogged favorably about the Ku Klux Klan.) Don Willett, confirmed to the 5th Circuit Court of Appeals, opposes same-sex marriage but once tweeted that he “could support recognizing a constitutional right to marry bacon.” Add to that list Neomi Rao, Trump’s nominee to replace Brett Kavanaugh on the powerful DC Circuit, who has written at least two law review articles and a blog post in which she defended dwarf-tossing.

Especially popular in Florida bars, dwarf-tossing is the strange spectacle in which competitors throw Velcro-clad little people at a wall or mattress like a shotput. The longest toss wins. The sport has been banned in some American states and parts of France, where a judge upheld such bans because of “considerations of human dignity.” Rao considers these laws an affront to individual liberty that fails to recognize the right of the dwarf to be tossed. In one article, she wrote that the decision in France upholding the dwarf-tossing ban was an example of “dignity as coercion” and that it “demonstrates how concepts of dignity can be used to coerce individuals by forcing upon them a particular understanding of dignity.”

Dwarf-tossing is an odd cause for a federal judicial nominee to champion. Even weirder, Rao has invoked it repeatedly in her writing to make the case that a misguided focus on human dignity is leading US courts to run afoul of the Constitution in decisions that advance LGBT rights and racial equality. These are areas of the law where, she argues, judges are letting the pernicious influence of international human rights law creep into their jurisprudence at the expense of American exceptionalism and personal freedom.

Her scholarly work hits on all the conservative bugaboos obsessed over by lawyers in the Federalist Society, the influential legal group that has played a major role in the Trump administration’s judicial nominations, including hers. It also gives a pretty good indication of where she will come down as a judge, not just on dwarf-tossing bans, but on some of the nation’s most contentious issues.

Rao, whom Trump nominated to the DC Circuit on Tuesday, is currently the administrator of the White House Office of Information and Regulatory Affairs, an agency often called the most important government office you’ve never heard of. Run by political appointees, OIRA has the power to water down health, safety, and environmental regulations created by federal agencies, and it often deploys a brutal cost-benefit-analysis approach that favors big corporations over individuals.

Rao considers laws banning dwarf-tossing an affront to individual liberty that fails to recognize the right of the dwarf to be tossed.

Rao’s nomination last year to run the office was controversial. A law professor at George Mason University’s Antonin Scalia Law School, Rao founded the Center for the Study of the Administrative State in 2015, with money from the conservative Koch brothers. She was instrumental in having the GMU law school renamed for the late Justice Scalia, with whom she had bonded while working as a clerk for Justice Clarence Thomas. When Rao was nominated for the OIRA post, critics feared that she was brought in as a primary instrument of Trump adviser Steve Bannon’s quest to dismantle the administrative state.

Those concerns have surfaced again, now that she is now poised to bring her anti-regulatory views to a court where virtually every major new federal regulation eventually gets litigated. “She’s a young academic who subscribes to an ardent strain of libertarian, small-government ideology,” says James Goodwin, a senior policy analyst at the Center for Progressive Reform who co-authored a report on Rao’s background when she was nominated to OIRA last year.

Her views on regulation are well known: She thinks the president should have absolute authority to replace at will the heads of independent federal agencies like the Federal Energy Regulation Commission, Consumer Financial Protection Bureau, and Federal Reserve—agencies Congress tried to insulate from politics of the presidency. She supports Trump’s order for federal agencies to eliminate two regulations for every one they create. But Rao’s participation in the American culture wars has received little attention.

Born to Parsi doctors who immigrated from India in the 1970s, Rao grew up in the Detroit metro area and attended Yale University. She interned at the conservative Heritage Foundation, which has helped the Trump administration pick federal judges. She worked as a reporter for the conservative Weekly Standard before heading off to the University of Chicago law school. From there, she took the well-trod path of many conservative rising stars, clerking first for 4th Circuit Judge Harvie Wilkinson and then for Thomas. After a stint on Capitol Hill as counsel to Republicans on the Senate Judiciary Committee, she landed an associate position in the White House counsel’s office during the administration of President George W. Bush. At the time, Kavanaugh was also working in the administration, as White House staff secretary. A year later, he left to take the seat on the DC Circuit that Rao has been nominated to fill.

For the past decade, Rao has been on the faculty of GMU’s law school, a bastion of conservative legal scholars. She was not well known outside conservative circles before joining the Trump administration. Her specialty, administrative law, isn’t a particularly media-friendly topic. But her obscurity might also be a related to the impenetrability of her scholarship, including her hot takes on dwarf-tossing. “She takes these sort of nutty positions on whether we should recognize human dignity” and whether it falls within the jurisdiction of the court, says Goodwin, who read all of her work while writing his report.

Turgid to the point of incomprehensibility, Rao’s writing reflects little of her idol Scalia’s literary genius, but it does hint at some of his homophobia. The work suggests that Rao’s conservatism goes far beyond regulation and extends to some of the nation’s most contentious social issues, including affirmative action, the welfare state, and international humanitarian aid. It’s particularly focused on LGBT rights, with special scorn reserved for Supreme Court decisions written by Justice Anthony Kennedy, whose retirement this summer elevated Kavanaugh and made Rao’s nomination possible.

Conservatives hated Kennedy for his sympathy for gay rights and his openness to looking abroad to international law for guidance in American courts. Rao channelled these views in a law review article in which she critiqued Lawrence v. Texas, a landmark decision Kennedy wrote in 2003 that brought an end to the criminalization of consensual gay sex. In the decision, Kennedy wrote, “The liberty protected by the Constitution allows homosexual persons the right to choose to enter upon relationships in the confines of their homes and their own private lives and still retain their dignity as free persons.”

Rao saw the opinion as a sign of creeping European influence and warned that such nebulous concepts as dignity were dangerous threats to personal freedom. “The American Constitution protects rights—not values such as human dignity—limiting the grand scale theorizing possible by the Supreme Court,” she wrote in the Columbia Journal of European Law in 2008.

Kennedy’s decision in United States v. Windsor, the 2013 ruling that struck down the federal Defense of Marriage Act, came in for similar derision in “The Trouble with Dignity and Rights of Recognition,” a 2013 piece Rao wrote in the Virginia Law Review Online. “Windsor does not uphold a substantive right or freedom, only a right to have your marriage validated by the federal government,” she wrote. “The constitutional right at issue—some form of freestanding dignity of recognition—has little connection to our constitutional text or history.”

Rao’s distaste for squishy concepts in the law, such as dignity, was reflected in her 2009 testimony at the confirmation hearing of Justice Sonia Sotomayor, who’d come under fire for showing too much empathy on the bench. “In our courts,” Rao testified, “the rule of law should prevail over the rule of what the judge thinks is best.” Unless, perhaps, the judge has an affinity for dwarf-tossing.