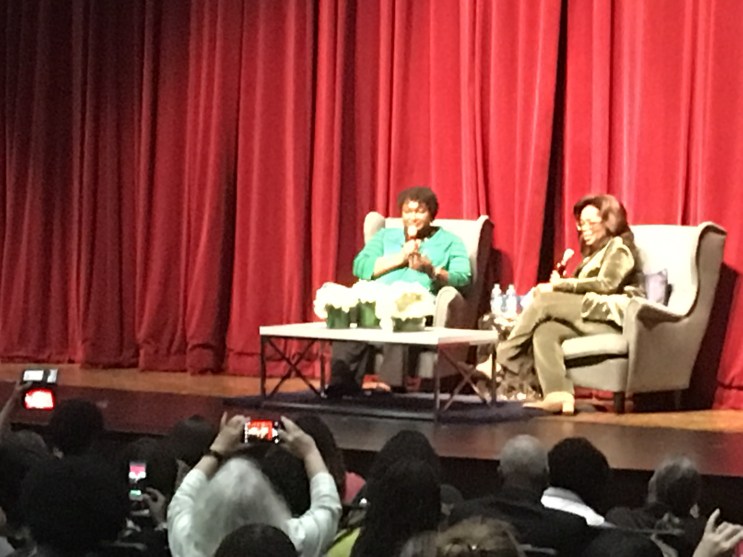 Stacey Abrams may be a draw, but there’s nothing like Oprah to bring out the crowds.

And out they came on a rainy Thursday afternoon, huddling under umbrellas outside an auditorium in Decatur, Georgia, to see Oprah Winfrey in conversation with Georgia gubernatorial hopeful Abrams. Winfrey was just one of the celebrities who have come to Georgia to campaign with Abrams: Comedian Will Ferrell was here earlier this week. Barack Obama is due to arrive in town tomorrow.

I asked some of Abrams fans what made them come out in the rain.

This lady braved the downpour and brought her baby—a preemie born at just 26 weeks!—out to see Oprah and Stacey Abrams today. pic.twitter.com/v6wKzM9OQN

Decatur, adjacent to Atlanta, has a large African American population, and as the throng waited for Winfrey and Abrams to arrive, the mood was jubilant: People danced to Pharrell’s “Happy,” Whitney Houston’s “I’m Every Woman,” and Beyoncé’s “Run the World (Girls).”

When Winfrey took the stage, to thunderous applause from the 400 attendees, she said, “I’ve been watching what’s been going on down here. Y’all are about to make some history down here.”

Winfrey said she had called Abrams just three days earlier to float the idea of coming to Georgia to campaign for her. Abrams, Winfrey said, was driving, and when she realized who was calling, “She said, ‘Girl, let me pull over!'”

The wide-ranging conversation touched on many of Abrams’ campaign issues: expanding Medicaid, protecting voters’ rights, and ensuring access to higher education, among others:

Oprah: “I’m here because [Abrams] plans to strengthen environmental protection so our children can have clean, safe water.”

But there were plenty more Winfrey-style personal moments. Abrams opened up about how writing (she’s a published romance novelist) serves as a welcome distraction and release. She also confessed how difficult it had been to hear from old friends who didn’t support her campaign. Some, she said, had told her, “‘Stacey you’re smart and talented, but you’re a black woman.’”

In one of the afternoon’s most powerful exchanges, Winfrey asked Abrams what she dreamed of for Georgia’s future. Abrams responded:

Abrams: “I believe poverty is immoral. It is a squandering of human capital. Some of the brightest and most innovative people I’ve ever met are just trying to stay alive. I want poverty to be eradicated. If we can solve it in Georgia, we can solve it in America.”

The women joked easily with each other and with the crowd—at one point, they imagined a romance-novel scene that involved going to the polls to vote. Just before the Q&A portion, Winfrey asked Abrams what she planned to do on November 7. Abrams smirked and responded, “Take a nap!”