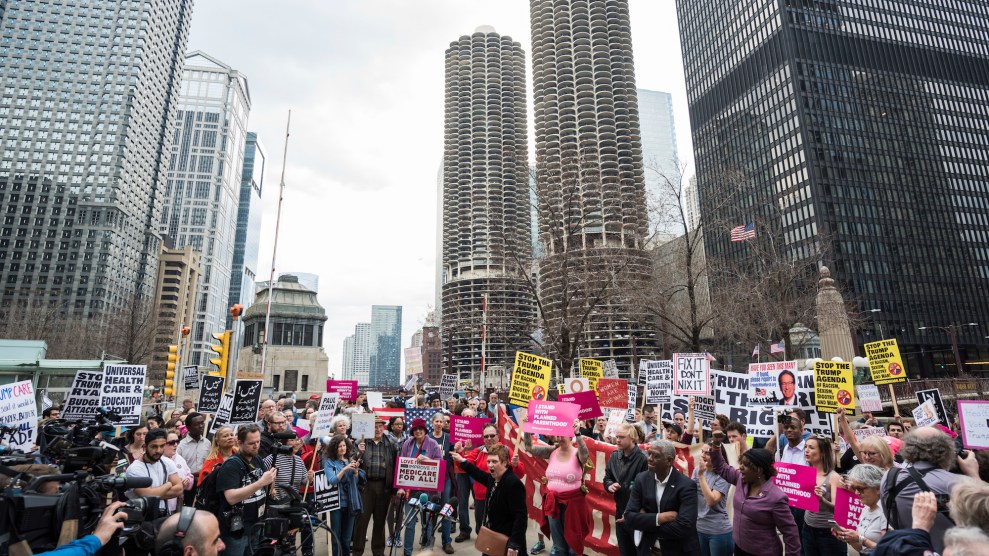 Demonstrators gather across from Trump tower in Chicago to celebrate the GOP's failed repeal of Obamacare on March 24, 2017.Max Herman/Sipa via AP

Early in 2017, in the depths of a bitter Midwestern winter, the Democratic Congressional Campaign Committee deployed a staffer to Illinois’ 6th congressional district in the suburbs of Chicago. He’d been sent there as part of the “March into ’18” initiative, a pilot program aimed at funneling the progressive activism on display at that year’s Women’s Marches and airport protests into organized Democratic electoral energy. The hope was that the staffer would lay the groundwork for a campaign that could—with the right message, the right candidate, and the right luck—unseat the Republican incumbent.

As it turned out, that staffer simply wasn’t needed. Once on the ground, he encountered more than three dozen progressive groups that had already built a well organized grassroots machine working to defeat Peter Roskam, the district’s six-term GOP representative. After voters chose Sean Casten, an engineer and green energy entrepreneur, as the Democratic nominee in March, those activists were joined by hundreds of Chicagoans who have repeatedly made their way west to the district with the help of Vote Save America—the get-out-the-vote effort run by the Obama alums who founded Pod Save America—and Swing Left, the national grassroots organization that directs Democratic volunteers from solidly blue districts to battleground races where they can make an impact. So many of these progressives are now making the 30-mile trek to the suburbs that on one recent Saturday, I struggled to find anyone who actually lived in Casten’s district among the roughly 50 canvassers at his Downers Grove campaign office.

What’s happening in Chicagoland is a microcosm of what’s happening in America: Donald Trump’s surprise 2016 victory shocked suburban-dwelling liberals into civic action, while their urban neighbors—once complacent in their deep blue enclaves—inundated nearby swing districts in a frantic effort to wrest control of Congress from the GOP. Swing Left says that nationally, nearly 100,000 people have signed up for The Last Weekend, the group’s get-out-the-vote initiative for the crucial final days before the polls close. In all, 600,000 people signed up to volunteer with the organization at some point during the election cycle.

But what distinguishes the mobilization in the country’s third largest city is its proximity to some of 2018’s most closely watched races. In addition to a couple of Illinois congressional battlegrounds, it’s within spitting distance of Wisconsin’s 1st district race to replace retiring House Speaker Paul Ryan and the tight Indiana Senate race between Democratic incumbent Joe Donnelly and GOP challenger Mike Braun. As progressives watched the Illinois 6th district overflow with resistance volunteers, groups like Swing Left and Indivisible began encouraging surplus members to travel even farther from the city center to help activist groups and fledgling campaigns on the region’s periphery.

Chicagoland is a flat, beige swath of suburbs, exurbs, and urban expanses in Illinois, Indiana, and Wisconsin that radiate 90 miles or so from the Windy City. Its boundaries are debatable, but decidedly forgiving: The roughly 9.5 million people who hail from any point within that wide ring will tell you they are “from Chicago,” revealing only through follow-up questioning that they’re as close to Chicago as Philadelphia is to New York. Despite the vastness, an intimacy persists between the city and its satellites. Nearly a quarter of Chicago’s residents commute outside the city, many to jobs at the headquarters of companies such as Walgreens, and (for now) Sears.*

But until recently, that shared identity didn’t extend into politics. The city that kicked out then-candidate Trump in 2016 sits close to GOP strongholds. The borders of the historically Republican Illinois 6th and 14th districts—the latter of which chose Trump by 4 points and its GOP congressman by 20 points two years ago—sit just about 30 miles outside of Chicago. Wisconsin and Indiana, less than an hour away from any starting point in the city, went for Trump and have Republican governors.

As suburban activists began coming together last year to revive long-decaying Democratic infrastructure, a similar awakening was happening in the city. In aftermath of the Women’s March and President Trump’s ban on travelers from certain Muslim-majority countries, Indivisible and Swing Left chapters sprung up across the city, serving as outlets for the “pent-up” anger and frustration that people like Chris Gorton—a once politically dormant business consultant—says he and his liberal neighbors felt following Trump’s victory. Gorton’s own congresswomen, Jan Schakowsky, won her northern Chicago district by more than 30 points in 2016. “Swing Left and groups like Swing Left have given people like us who have Jan Schakowsky something to do,” says Gorton, who leads a chapter of the group. “It feels better than just screaming into Twitter or yelling into Facebook.”

And they’ve taken their new charge seriously, fanning out across the region to change voters’ minds and make sure Democrats get to the polls. Swing Left has about 300 volunteers across three chapters in Chicago; Gorton’s chapter on the city’s northside has paid special attention to Casten. Marj Halperin, a member of Indivisible Blue Beginnings, a Chicago-based group, says her organizations have sent dozens of volunteers into the 6th district on most weekends since last spring. At a fundraiser in October, she convinced 200 people to sign up to canvass for five Democrats in three states: Casten, Lauren Underwood in Illinois’ 14th district, Randy Bryce in Wisconsin’s 1st district, Donnelly in Indiana, and Illinois gubernatorial candidate J.B. Pritzker. During the final days of the campaign, she says, her volunteers will have participated in at least 500 canvassing shifts, knocking on 20,000 doors.

Another Indivisible chapter that captures southern Chicago and its suburbs has sent a team 20 miles over the Indiana border each week to canvass for Donnelly. “We’re all working together to have this kind of regional relationship,” explains Holly Fingerle, a member of the Indivisible South Suburban Chicago chapter. Across all of Chicago’s Indivisible chapters, 230 people have signed up to work one or more canvassing shifts over the final weekend of the campaign.

The outpouring has surpassed expectations of seasoned Democratic activists and has, in turn, led to more national support. After seeing the enthusiasm in Casten’s district, Swing Left added Underwood’s race—which Cook Political Report has moved from “likely Republican” to “toss-up” over the last few months—to their target map. Casten’s district is closer to Chicago than Underwood’s and has far better public transportation options for volunteers traveling form the city. To address that sort of imbalance, Swing Left has added a “high priority” designation to help activists identify candidates who could benefit most from the extra help.

“There are races we wouldn’t otherwise add to our maps that we now can add because there’s an active volunteer base nearby that’s doubling down on their effects to get out there, and Chicago is a great example of that,” explains Adrienne Lever, the campaign director for Swing Left. “The fact that we have such intense activism in Chicago means we can focus not just on Sean’s race, but also Lauren’s, and we know that we can support both of those with the energy of volunteers coming out of the city.”

Suburban campaigns can be a little shy about their relationship with their urban door knockers—understandably so, as the notion that Democratic candidates are being carried on the backs of outsiders is prime kindling for GOP attacks. But the volunteers are quick to explain their motives. “Peter Roskam gets to make decisions that affect everyone’s lives,” Gorton says, reminding me that Roskam, as chairman of the House’s Tax Policy Subcommittee, had been the self-described “chief architect” of the GOP’s 2017 tax bill. “I have no qualms about going to a district I don’t live in and telling them about Sean Casten.”

For his part, Casten says he’s “unbelievably grateful” for the support and feels “sort of spoiled” by the attention he’s gotten from Chicagoans. “You look at people in downstate races who aren’t on a train line to Chicago and don’t have that luxury,” he says. “I’m probably getting more than I deserve.”

He also points to Chicagoland’s identity as a vast industrial hub to explain the outpouring of support the region’s Democratic candidates have gotten from its urban denizens. “It’s an area that like, when things are broke, it’s like, all right, we’re just going to have to fix it,” he says. “There’s just a kind of roll-up-you-sleeves thing in the water here, which is pretty cool.”

*This story originally stated that the McDonald’s headquarters is located in the Chicago suburbs. It moved from the suburbs to downtown Chicago earlier this year.