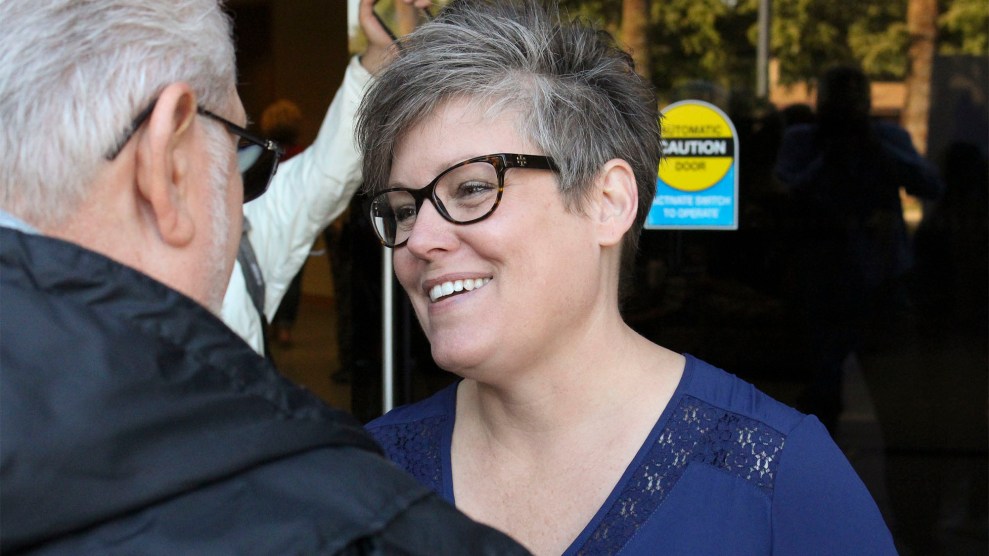 Arizona secretary of state candidate Katie Hobbs chats with a supporter at a get-out-the vote event in Phoenix. Bob Christie/AP

Kyrsten Sinema’s narrow victory in Arizona’s US Senate race may have gotten all the attention, but Katie Hobbs’ even narrower victory, declared five days later on Saturday, might say more about the future of the emerging purple state—and of voting rights across the country.

Hobbs, a Democrat, will become Arizona’s first Democratic secretary of state since 1995. The position is second-in-command to the governor, and it’s a common stepping stone to the governor’s mansion: Four of Arizona’s last nine governors were previously secretaries of state, according to the Phoenix New Times. Just as important, Hobbs campaigned on an expansion of voting rights, and she will now oversee the state’s elections, with the potential to reshape the electorate by improving access to the ballot for minority, young, and low-income voters.

She was one of three Democrats who took over secretary of state jobs previously held by Republicans, joining Democratic victors in Michigan and Colorado. These races were unheralded next to congressional and gubernatorial races across the country, but these officials now have the power to enforce state voting laws in 2020, advocating and implementing practices that will make it easier to vote in critical swing states.

Hobbs, a social worker and minority leader in the state senate, narrowly trailed Republican Steve Gaynor on November 6, but she took an 18,000-vote lead after most of the state’s mail-in ballots were counted. The candidates differed sharply on the right to vote. Hobbs sponsored legislation to enact automatic voter registration in Arizona, and she wants to expand the number of polling places and make it easier to cast mail-in ballots. She said the right to vote was “under attack from Republican attempts to suppress voter turnout among minorities, young people, and the poor” and pledged to do “everything in my power to protect every citizen’s right to vote and bring competency back to the office to restore confidence in Arizona’s elections.”

Her opponent, a wealthy conservative businessman, described himself on his website as “Pro-Trump,” “Pro-Second Amendment,” “Pro-border security” and “Pro-Life.” Gaynor advocated harsh restrictions on voting. He wanted to end the use of Spanish-language ballots (in violation of the Voting Rights Act) and mail-in ballots, which are used by 75 percent of Arizonans. He also called for overturning the National Voter Registration Act of 1993 and falsely claimed that “there are like 10,000 voters in our state right now that are undocumented.” (Only 30 cases of voter fraud have been referred to the Arizona attorney general’s office from 2008 to 2017, according to the Arizona Republic.)

Arizona has seen a series of voting problems under Republican control. Hobbs’ predecessor, Michele Reagan, was sued by the ACLU for improperly removing voters from the rolls, and she violated state law in 2016 by failing to send election information pamphlets to 200,000 voters. Under her watch, there were five-hour lines in Maricopa County in the 2016 Democratic presidential primary because the county had eliminated 70 percent of its polling places. “Hobbs will do everything she can to make sure everyone can participate in elections,” says Ellen Kurz, president of iVote, an advocacy group started in 2014 to elect Democratic secretaries of state who support voting rights. The group put $3 million behind Hobbs’ candidacy. “That has not happened in this office before. There has not been a Democrat in the office trying to increase voter participation.”

The 2018 election underscored how Republican secretaries of state have used the office to restrict access to the ballot. In Georgia, Brian Kemp instituted a series of suppressive policies as secretary of state while overseeing his own election for governor, which his Democratic opponent Stacey Abrams said allowed him to “tilt the playing field in his favor.” These included aggressive purging of the voting rolls, putting tens of thousands of registrations on hold, and advising counties on how to close hundreds of polling places. Abrams conceded the extremely close race on Friday.

Though secretaries of state do not pass election laws, they design and implement them as the top state election officials. They decide how registration lists are maintained, where polling places are located, and how voting machines are secured.

Democrats lost close races for secretary of state in Iowa, Ohio, and Nevada—all seats currently held by Republicans. But their pickups in Arizona, Colorado, and Michigan give them an opportunity to protect voting rights and increase their party’s chances of winning state and national elections in the future.

“We’ve got three states that are not going to experience the kind of voter suppression we saw in states like Georgia under Brian Kemp,” says Kurz. “We’ve got a heightened awareness this office matters, that it’s a place where you can increase or block access to the ballot.’

Benson’s victory is particularly significant because Michigan voters passed ballot initiatives on Election Day enacting automatic and same-day registration, along with nonpartisan redistricting, which she will now be in charge of implementing. “This election in Michigan is one that will define our democracy in the state for years to come,” she told me in October.

Indeed, in spite of widespread Republican voter suppression efforts, voters in a half-dozen states approved ballot initiatives this month making it easier to vote. These initiatives, plus Democratic victories at the state level, could make the landscape for voting rights look very different in 2020 from in 2018.

There’s still one big secretary of state race outstanding, in Georgia, the epicenter of the fight over voter suppression in 2018. Rep. John Barrow, the last white Democrat from the Deep South in the House of Representatives, who lost his seat in 2014, is running to succeed Kemp. He trailed on Election Day by just 19,000 votes, so he’s now in a runoff against Republican State Rep. Brad Raffensperger that takes place on December 4, with early voting beginning next week.

Barrow has criticized Kemp’s voter registration restrictions as “plainly illegal” and has been an outspoken opponent of gerrymandering after Georgia Republicans redrew his district to oust him from Congress. “Any thing we do that makes it harder than necessary for honest citizens to register, stay registered, or vote undermines their right to vote,” he wrote in the Atlanta Journal-Constitution on Monday.

Still, he faces an uphill climb, after Raffensperger edged him out on Election Day. Barrow was only able to advance to a runoff because a libertarian candidate won 2 percent of the vote, helping deny Raffensperger an outright majority. (The libertarian candidate has subsequently endorsed Barrow.) But Democrats are hoping their mobilized base will turn out on December 4 and carry Barrow to victory. In her concession speech, Abrams endorsed Barrow and said she’d work to elect him.

“For many years, most folks haven’t put much thought into the office of Secretary of State,” Barrow wrote in the AJC. “But on November 6th, all of us received a civics lesson on the importance of this office.”