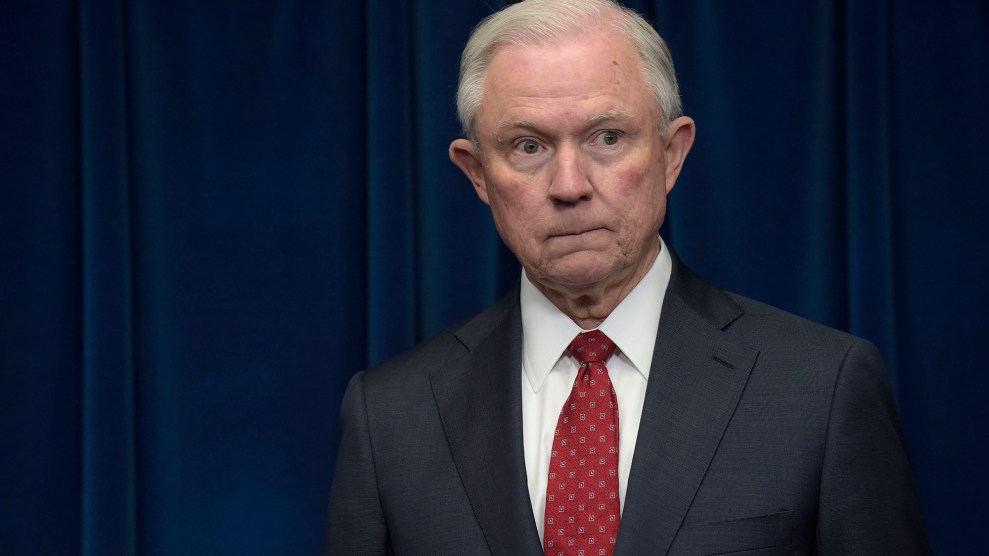 It happened: The Attorney General of the United States has been forced out.

The resignation letter of Jefferson Beauregard Sessions III hit the internet on Wednesday morning—even as votes continue to be counted in an election that handed the House back to Democrats for the first time in eight years. The implications of Sessions’ ouster are enormous. President Donald Trump announced that he is installing a loyalist, Matthew Whitaker, which raises some serious questions about the future of special counsel Robert Mueller’s Russia investigation.

D.C. bureau chief David Corn and reporter Dan Friedman sit down with Jamilah King to tackle these questions for the Mother Jones Podcast. This is an edited and condensed transcript of that conversation.

Jamilah King: David, where do you put this news in the pantheon of big developments for the future of the Trump presidency?

David Corn: It’s clearly an 11—maybe even a 13 or 14, but it’s not unexpected. We had Trump, for the last year, saying again and again that it was a terrible mistake for him to have given the attorney general job to Jeff Sessions. Why? Because Jeff Sessions recused himself from the Russian investigation and did not do what Trump wanted the most: protect Trump.

Trump has said repeatedly, “Why can’t I have an attorney general like Bobby Kennedy, who protected John Kennedy? Or Eric Holder, who protected Barack Obama?” He’s really thinking like a mob boss. He needs a Tom Hagan, a consigliere, to protect him as the number one job of the AG. And that was not what Sessions did. So it completely enraged Trump. He humiliated Sessions repeatedly. Senate Republicans basically said, “Don’t fire him.” Certainly not before the midterms and create a constitutional crisis—so he waited about 12 hours [after the election]. And technically, it’s not quite a firing. There was a resignation, but in his resignation letter Jeff Sessions said, “As you requested, I am submitting my resignation.” So clearly this was Trump giving Sessions a pair of concrete shoes and tossing him into the Potomac.

JK: What do we know about Matthew Whitaker? Mr. Sessions’ chief of staff who Trump has picked for acting attorney general.

Want to listen in on their conversation instead? David and Dan discuss what’s next for the Russian probe on the Mother Jones Podcast.

JK: Dan Friedman, you’ve been breaking scoop after scoop on this front at Mother Jones. Putting aside the election for a moment, where is Robert Mueller in this whole thing?

DF: Well Mueller’s been a bit quiet in the run-up to the election, but we know that he has cooperating witnesses. Paul Manafort, Michael Cohn, Rick Gates, Michael Flynn is just about wrapping up his cooperation. So all those things may be leading to new indictments or new investigative leads. So we’re waiting to see what’s going to happen. In addition, a lot of associates of Roger Stone have been before the grand jury that Mueller has convened in DC. He’s had more than a dozen of them. And he seems to be looking at whether Stone was in contact with WikiLeaks about the Clinton and Democratic emails that were stolen and leaked by Russian intelligence agents, and whether Stone may have lied about his involvement in that before the House Intelligence Committee or elsewhere.

JK: So this is a simple question for you but I suppose nothing’s really simple. What happens if Mueller gets fired? Does everything just vanish and we’ll never see or hear anything from this investigation again?

DF: No. Mueller has opened investigative threads. He has all the indictments aren’t going to go away. His investigation into people he may be investigating—who he hasn’t indicted [yet]—that’s a more interesting question. He could try to pass it on to the FBI. He could look for local attorneys, US attorneys, to take up some of what he’s been doing.

DC: It’s important to note that this is really not the Mueller investigation. This is an FBI investigation started by the FBI when James Comey was fired by Donald Trump. The Justice Department decided to put a special counsel in charge of this investigation, and Mueller was hired to oversee a pre-existing investigation. There are 16 or 17 other lead prosecutors who are involved; there are dozens of FBI agents who are involved. If you fire Robert Mueller, that doesn’t mean you’re firing the FBI investigation and these prosecutors. To do that, you might have to go through the FBI director Chris Wray, and then the question is: Would he, if ordered to, fire these FBI agents or at least remove them from the investigation? Would he follow such an order and basically close down the probe? Interestingly enough, Matthew Whitaker the new acting attorney general, has talked about the Justice Department essentially kill[ing] the investigation by starving it of funds—not allowing it to be budgeted for the money it needs. So there are a lot of things that could happen here and it could turn out that if Donald Trump really wants to kill the investigation, he might have to do a lot more, and go through a lot of other bodies than just getting rid of Sessions.

JK: David, this drama isn’t over by a long shot. What can we expect now?

DC: I’m just laughing because I don’t know if we did expect Jeff Sessions to be canned right after the election. The question really is how far is Trump willing to go to get rid of this investigation? Will he tell Whitaker to do everything possible to smother it? Will they let it continue for a while with Whitaker doing everything he can to keep it narrow and to basically strangle it? We don’t know how nuanced Trump might be, but we do know that nuance is not his strong suit.