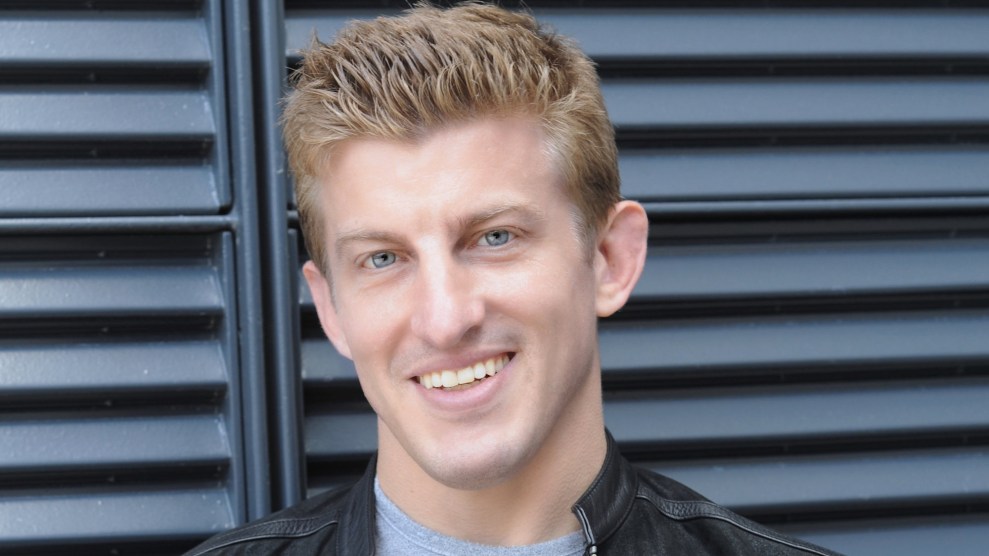 Alex Epstein is the author of The Moral Case for Fossil Fuels and works as a consultant for the coal industry and other dirty companies. On Friday, he came to the Turning Point USA student action summit in Palm Beach, Florida, to tutor the next generation of conservatives on the subtleties of climate change denial, offering pointers on how to win arguments with environmentalists. But many true believers from the next generation of conservatives didn’t seem to be buying his message.

Epstein drew the important distinction between being a “climate thinker”—calm, rational, evidence-based—as opposed to being a “climate scientologist,” whose belief in climate change, he said, is similar to that of a member of a religious cult, rather than a rational scientist. According to Epstein, the main giveaway that someone is a climate scientologist is that they only present the issue from one side. “Look for people who refuse to acknowledge the benefits of fossil fuels,” he counseled several thousand students. Likewise for people who won’t acknowledge that CO2, the primary greenhouse gas involved in global warming, has major benefits for humans. Plants need it to grow, after all!

Another characteristic of climate scientologists is their refusal to engage in a civil debate, Epstein explained. He pointed to people like Al Gore, whom he offered $100,000 to publicly debate (Gore refused). “If you’re really so right, why won’t you come and prove me wrong?” he asked. Environmentalist Bill McKibben did take $10,000 for his organization 350.org to debate Epstein in 2012.

Epstein also warned the audience that scientists and environmentalists who predict global catastrophe from climate change are suspect because such predictions are simply “wild speculation.”

Because the conference was running late, Epstein wasn’t able to take questions in the main convention hall after his talk, so he invited kids to join him in the lobby for a chat and an “I heart fossil fuels” lapel pin. About 50 of them took him up on the offer, lining up for the better part of an hour for the chance to get to meet him and ask questions. Wearing suits accessorized with their 15 pieces of flair—buttons declaring “I heart capitalism” or “Socialism Sucks” pinned to their conference lanyards—they politely quizzed Epstein about his presentation.

Wearing suits accessorized with their 15 pieces of flair—buttons declaring “I heart capitalism” or “Socialism Sucks” pinned to their conference lanyards—they politely quizzed Epstein about his presentation.

Some of them were indeed die-hard climate change deniers. A Tulane architecture student, for instance, couldn’t understand why her college department was so wedded to the idea of global warming. “How would I approach it as a skeptic?” she asked. A high school student told Epstein she was having a difficult time finding research materials to back up her school projects denying climate change. (He directed her to his website.) But a remarkable number of the kids, maybe two out of three—even some who claimed to be fans and took selfies with Epstein—asked tentative questions about a host of environmental concerns, suggesting that they are seeing the impact of climate change firsthand, and that what they see doesn’t square with Epstein’s message about the benevolence of fossil fuels.

Some of the kids, pointing to medical problems that car exhaust can exacerbate or create, indicated that they think renewable energy is a good thing. One student approached Epstein and said that while he fully recognized the utility of fossil fuel, wouldn’t it nonetheless be smart to try to “go green” and maybe shift to solar power? Epstein shot back, “Why the sun?” He insisted that the idea of getting power from the sun is “a religious thing” and will never be practical. What is practical, he said, is nuclear power, which the country needs more of. The student looked unconvinced and thanked him for his time.

Another student told Epstein that while fossil fuels clearly have their benefits, “They are a limited resource. Should we not seek alternate energy sources from the sun or nuclear fission?” Epstein responded, “We should stop criminalizing nuclear power,” and then swatted away the idea that the fossil fuels resource would ever be exhausted.

One young woman approached Epstein. “Despite the good stuff about carbon,” she said, “there are some bad things.” She wanted to know what he thought about all the problems with plastics. Epstein had an immediate response: The main problem with plastic, he countered, is that people throw it in the ocean. “You just want to put it in a safe place,” he said.  Earlier he had claimed that climate change activists refuse to acknowledge the need for “human flourishing” in their policy development. People in the 1800s, he insisted, used to tolerate a lot of smoke in their homes because even the smoky houses were warmer and a big improvement over living outside. The problems with pollution (and also climate change) need to be weighed against the benefits of fossil fuels, he told the students.

His next questioner politely observed that where he lives in upstate New York, there’s a problem with acid rain that stems from burning coal. He was concerned about methane and sulfur dioxide gases. Epstein dismissed acid rain as “just pollution. That has nothing to do with climate change.” Likewise, a question about coral reef bleaching drew a rebuke and an insistence that changes in the ocean happen historically and have more to do with other, local factors than man-made climate change.

A brave high school senior who waited nearly an hour to get his question in said to Epstein, “I disagree with you. I’m a strong believer in climate change. Why do you think all the scientists are wrong?” Epstein didn’t deign to answer and told him he should be embarrassed by such a sloppy question. He then explained that the media and government are looking to express “extreme views” and that’s why scientists making the most dramatic predictions about climate change are the ones who get the most attention. (Later, the student confessed he was a liberal from Appleton, Wisconsin, who came to the Turning Point conference because he believes in free speech on campus and because “I want to hear other people’s opinions.”)

At one point, what passes for a heckler at this well-behaved conference materialized. A young woman from Drake University walked by and yelled, “Alex! Alex! I disagree with you on a lot of things, but hey, keep up the good fight!” She walked away with a laugh.

Once all the students had drifted away, I asked Epstein whether he was surprised at how many students attending a conservative conference seem to be pretty convinced that climate change is a real threat to the planet. Were any of the questions or the lack of support for his love of fossil fuels unexpected? Epstein said he was simply there to convey his “thinking method. I hope that all of them read what I say and think about it.” After all, he didn’t start out as a pro-fossil fuel evangelist as a kid, either. “Most of them have been exposed to the anti-fossil fuel view,” Epstein said; they would eventually come around once they heard from the other side.