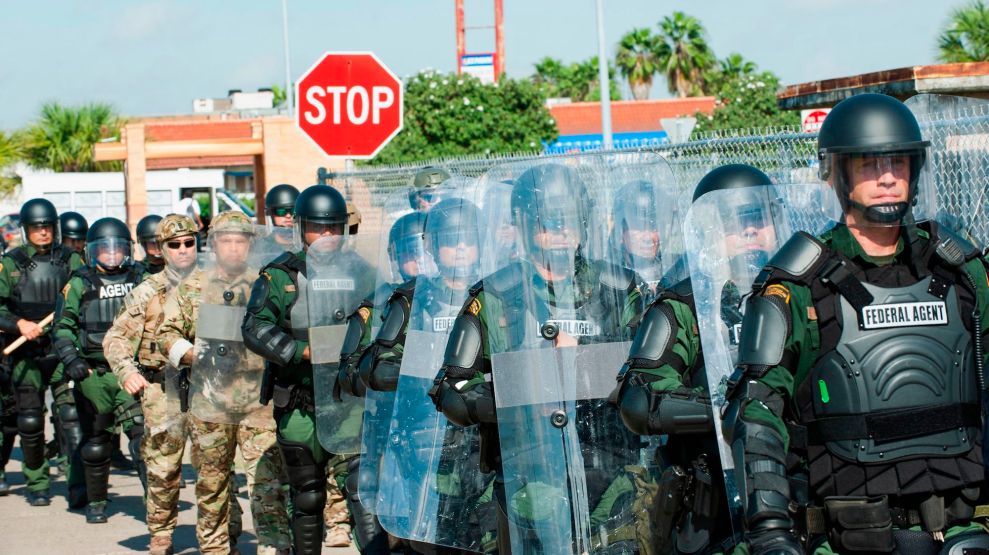 Customs and Border Protection agents in Texas participate in a training exercise along the border with Mexico in November. Andrew Cullen/Getty

US Customs and Border Protection paid a consulting company nearly $14 million to recruit new agents as the agency struggled to boost staffing levels amid an immigration crackdown. For that fee, the company processed just two successful job offers. The startling figure, along with plans to use a questionable Blade Runner-like lie detection system, is among the findings of a scathing new investigation by the Department of Homeland Security’s internal watchdog.

After receiving multiple complaints, DHS’s Office of Inspector General began investigating a five-year contract worth up to $297 million that CBP, a division of DHS, awarded last year to Accenture Federal Services, a subsidiary of global consulting company Accenture. The contract gives Accenture nearly $40,000 for each of the 7,500 CBP officials—including 5,000 Border Patrol agents—it is supposed to help recruit and hire. The OIG report, released Monday, shows that Accenture’s services have been even more costly than previously known and could put CBP at risk of being sued.

The watchdog found that Accenture is “nowhere near” meeting its goal of hiring 7,500 people over five years, even though CBP has used many of its own resources to do the job for which it is paying Accenture. “As such, we are concerned that CBP may have paid Accenture for services and tools not provided,” the report states. “Without addressing the issues we have identified, CBP risks wasting millions of taxpayer dollars.”

CBP has struggled for years to hire Border Patrol agents. Congress has set a minimum staffing level of about 21,370 agents, but there were just 19,555 agents in 2018. The Accenture contract came in response to President Donald Trump’s January 2017 request for 5,000 additional Border Patrol agents. It is still not clear whether CBP will be able to hire those agents, because Congress has refused to provide the funding for hiring them.

When CBP awarded Accenture the hiring contract in November 2017, Mother Jones reported in June, it was essentially paying the company for extremely expensive hand-holding throughout the application process for new agents. Accenture was supposed to give applicants “one-on-one” encouragement so they didn’t get “stuck,” according to federal contracting documents. That included reminding them to take their entrance exam and providing “helpful information” about the test. It was also supposed to help applicants schedule their physical fitness test and medical exams.

Accenture’s services have been even more costly than previously known and could put CBP at risk of being sued.

Accenture was to assist with all steps of CBP’s hiring process within 90 days of getting the contract. But CBP did not establish metrics to determine whether Accenture was doing that, the report states. OIG’s assessment of Accenture’s effectiveness was particularly damning. “[A]s of October 1, 2018—10 months into the contract—CBP has paid Accenture approximately $13.6 million for startup costs, security requirements, recruiting, and applicant support,” the report found. “In return, Accenture has processed two accepted job offers.”

CBP disagreed with that characterization in a response included in OIG’s report. “Accenture has created a hiring structure…and conducted many of the hiring steps for several thousand applicants,” Henry Moak, a CBP official wrote. OIG replied that the contracting documents it reviewed show that Accenture and CBP are unable to track applicants recruited by Accenture. “As such,” the report states, “we question the veracity of CBP management’s assertion.”

Instead of providing a team of hiring experts, OIG found, Accenture “relied heavily” on CBP during the hiring process. A key part of the contract required Accenture to develop a system to track applicants. That did not happen, and the company used CBP’s system instead, according to OIG. Accenture also planned to use a computer program to speed up background investigations and processing of security clearances, but the program didn’t work. The company responded by reviewing security clearance forms manually, which created a backlog.

OIG is also concerned about Accenture’s decision to use a lie detection system called EyeDetect to screen applicants. The system works by having a computer analyze respondents’ eyes as they answer questions. As Wired reported last week, the National Security Agency found that EyeDetect, a product of technology company Converus, worked no better than random chance at identifying false statements when it tested an early version of the system in 2013. Converus’ own scientists have conducted the only peer-reviewed study of EyeDetect. Yet in August, Accenture deployed EyeDetect at a hiring expo without getting approval from DHS’s science and technology compliance office. Accenture plans to use EyeDetect results to decide whether to keep applicants in its own pool of potential CBP hires or give them to CBP to process. That could put CBP at risk of being sued by applicants if they are held to different standards by Accenture and CBP, according to OIG.

The lack of funding raises additional questions about why CBP quickly awarded the lucrative contract to Accenture. DHS’s Inspector General found last year that CBP had failed to justify the need for more Border Patrol agents. Congress stated in a March budget document that hiring additional Border Patrol agents was “not supported by any analysis of workload and capability gaps across CBP.”

CBP has been strangely sympathetic to Accenture’s shortcomings. At one point, Accenture did not know which applicants it was recruiting, so “CBP agreed to give credit and temporarily pay Accenture for a percentage of all applicants regardless of whether CBP or Accenture processed the applicants,” OIG found. CBP also went out of its way to take blame, telling OIG in its responses to the report that it has sometimes failed to clear Accenture staff on time.

“We disagree,” OIG responded. “Based on our review of contract documentation…CBP has been accommodating Accenture, rather than Accenture accommodating CBP.”