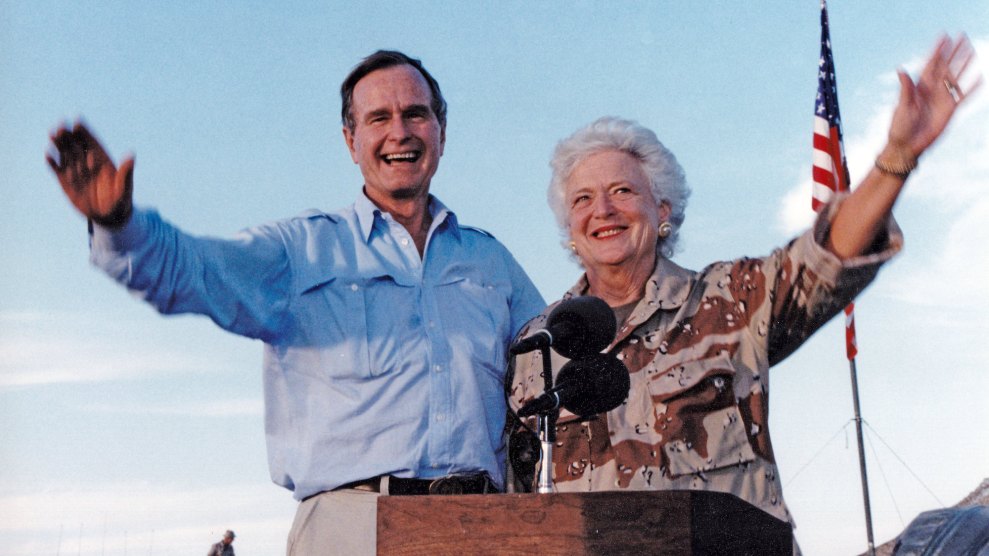 The 41st president of the United States, George H.W. Bush, died Friday at age 94. World leaders have not directly mentioned President Donald Trump and the dangers of isolationist policies in their flood of statements, but it’s impossible to remember Bush’s own words calling for a “kinder, gentler nation” and read the memorials to Bush—a veteran of World War II, ambassador to the United Nations, director of the CIA, envoy to China, and vice president—without thinking of how far the Republican Party has shifted since his one-term presidency.

President Barack Obama’s statement mourned Bush as “a patriot and humble servant…While our hearts are heavy today, they are also filled with gratitude.” Obama emphasized aspects of Bush’s immigration and diplomatic policy at a time Trump is defending using tear gas on migrants, turning away refugees seeking asylum, and denouncing longtime US allies.

“Expanding America’s promise to new immigrants and people with disabilities,” Obama wrote. “Reducing the scourge of nuclear weapons and building a broad international coalition to expel a dictator from Kuwait. And when democratic revolutions bloomed across Eastern Europe, it was his steady, diplomatic hand that made possible an achievement once thought anything but—ending the Cold War without firing a shot.”

America has lost a patriot and humble servant in George Herbert Walker Bush. While our hearts are heavy today, they are also filled with gratitude. Our thoughts are with the entire Bush family tonight – and all who were inspired by George and Barbara’s example. pic.twitter.com/g9OUPu2pjY

In the Washington Post, President Bill Clinton wrote a heartfelt ode to Bush, describing the friendship the political opponents shared over the decades and the letter Bush left for him on the first day of his presidency. “I cherished every opportunity I had to learn and laugh with him. I just loved him,” Clinton wrote, describing also the lessons he took from that unlikely friendship:

Given what politics looks like in America and around the world today, it’s easy to sigh and say George H.W. Bush belonged to an era that is gone and never coming back — where our opponents are not our enemies, where we are open to different ideas and changing our minds, where facts matter and where our devotion to our children’s future leads to honest compromise and shared progress. I know what he would say: “Nonsense. It’s your duty to get that America back.”

Here’s the letter that Bush wrote to Clinton:

While relations between the United States and its close European allies have deteriorated thanks to Trump’s “America-first” stance, French President Emmanuel Macron remembered Bush as “a world leader, who strongly supported the alliance with Europe.” British Prime Minister Teresa Maysaid, “Today Britain remembers a great statesman and a true friend of our country.”

Of course, Bush’s international policy, especially in the Middle East, was more complicated than many statements capture, leaving a mixed legacy after the 1991 Gulf War that “only extends to the presidency of his son, George W. Bush, who ordered the 2003 U.S.-led invasion of Iraq,” writes the Washington Post.

Trump issued an uncharacteristically traditional, sober response, after having clashed with the Bush family throughout the presidential primaries. The White House says Trump will attend Bush’s funeral at the National Cathedral in Washington, DC.

Trump had a scheduled press conference at the Group of 20 summit in Argentina on Saturday, which he canceled “out of respect for the Bush Family.”

….However, out of respect for the Bush Family and former President George H.W. Bush we will wait until after the funeral to have a press conference.